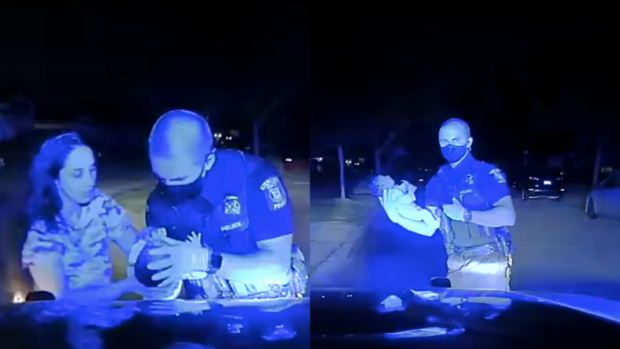 A police officer is being hailed a hero after he saved a 3-week-old baby girl from choking on milk last Thursday, July 9.

Cameron Maciejewski went to the child’s home in Michigan, United States in response to her family’s call. The baby was blinking but could not breathe due to blocked airways, the Detroit Free Press reported on July 13.

Upon his arrival, the frantic mother brought the child to him outside, as seen in a video on Sterling Heights Police Department’s Facebook page yesterday, July 14. Maciejewski then carries the baby and asks the mother to calm down as other family members approached them.

Despite the mother’s wailing, the officer remained undisturbed and performed back thrusts on the baby. This technique eventually removed the obstruction from the baby’s throat.

Upon pulling up to the home, the officer was rushed by the family who were holding their three week old baby girl, who was not breathing. Ofc. Maciejewski calmly takes the baby in his arms and performs back thrusts in attempts to clear the baby’s air way. When doing so, the baby coughs up the obstruction, and begins to cry. The baby was then turned over to the Sterling Heights Fire Department who transported the baby to the hospital for evaluation.If it wasn’t for Ofc. Maciejewski’s quick, calm, lifesaving actions, the outcome of this incident could have been tragically different. Not only did the officer save the baby, but the officer did an outstanding job consoling the family.Once again, the Sterling Heights Police Department strives to provide the best service to our citizens, especially when it matters most!

Once her airways freed, the child began to cry while her mother continued to wail on the street. Maciejewski then handed the child to the local fire department, who brought her to a hospital for evaluation.

Following the incident, the department also praised the officer for his heroic deed.

“If it wasn’t for Ofc. Maciejewski’s quick, calm, lifesaving actions, the outcome of this incident could have been tragically different,” it noted. “Not only did the officer save the baby, but the officer did an outstanding job consoling the family.” Ryan Arcadio/JB