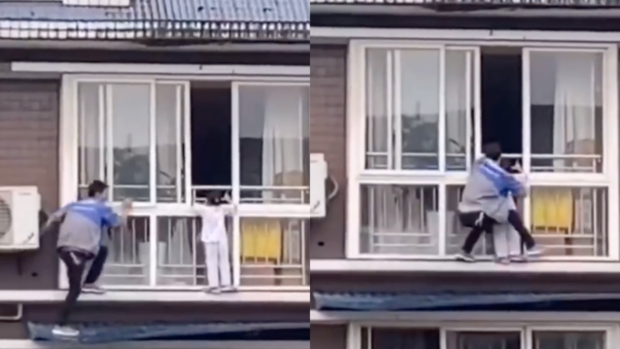 A service engineer is being hailed a hero after scaling a building’s exterior to save a 5-year-old girl, who was stuck outside her apartment’s window on the sixth floor.

Hu Yunchuan was working nearby when he heard of the child’s situation in Sichuan, China last Thursday, May 21. The girl had climbed out of her home to look for her mother, as per Daily Mail on May 22. However, the girl was believed to be home alone at the time.

Once Hu spotted the child, he immediately tried to open her apartment’s front door with the help of another resident, but it remained closed.

He then entered another resident’s unit on the fifth floor and exited through the window to get closer to the girl, as per report. After stepping out of the window, Hu used the rails to climb towards the girl’s unit.

While Hu made his way to the girl, a crowd below prepared a white sheet in case the girl falls, as seen in a video on Haier’s Weibo page. Haier is the company Hu works for.

Upon reaching the child, he quickly wrapped his arm around her and carried the girl safely back into her apartment.

Following Hu’s rescue effort, his employer dubbed him a real-life Spider-Man. According to the report, the company also gave him an apartment worth 600,000 yuan (over P4.2 million) for his heroic deed.

Meanwhile, Hu explained to Sichuan Observer that his choice to save the girl was simply his natural reaction to the situation.

“I didn’t think about anything at that moment,” he was quoted as saying. “It’s quite a common thing to do. Not just me, a lot of people [would do the same].” Ryan Arcadio/JB