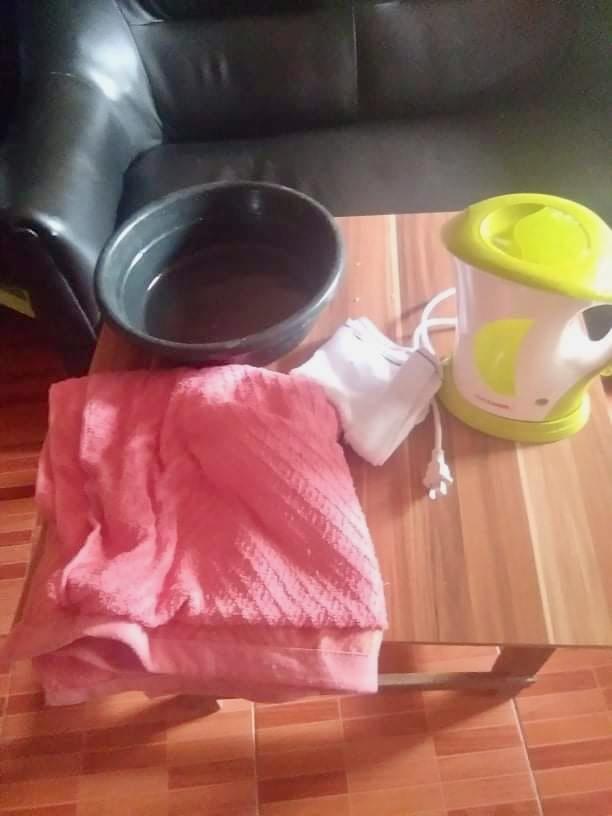 THE KIT A water heater, towels and a plastic basin are items in the “tuob” kit bought by Cebu City for P2,500 each. —CONTRIBUTED PHOTO

CEBU CITY, Cebu, Philippinations —Is buying a “tuob,” or steam inhalation, kit at P2,500 each worth it?

This is the question raised by many in this city after the city government confirmed it had spent P2.5 million for the purchase of at least 1,000 tuob kits, which were distributed to new coronavirus disease (COVID-19) patients housed in barangay isolation centers (BICs) since May.

The purchase was made despite repeated warnings from the Department of Health and a group of 13 medical societies that tuob, which is being promoted as treatment to COVID-19 by Cebu Gov. Gwendolyn Garcia, was not a cure to the dreaded virus.

Tuob is the practice of covering one’s head with a towel or blanket to inhale steam from a small basin with boiled water infused with lemon, ginger or eucalyptus.

Councilor Jerry Guardo defended the city’s move amid criticisms that the kits were too expensive and that the local government should have spent the money for more proven measures against COVID-19.

“If we can help one patient recover from COVID-19 with only a budget of P2,500, that’s very cheap for a single life we save,” said Guardo, the proponent of the project aimed to “alleviate” symptoms of the disease.

Guardo, interviewed over radio dySS here, said the budget for the kits was taken from the city’s appropriation for COVID-19 response, but he did not know who was the supplier as it was the executive department that did the canvassing and procurement.

The city official claimed that many patients who underwent steam inhalation in the BICs had recovered from the disease.

“We have had a spike in recoveries since we practiced tuob at the isolation centers. This is not a cure, but if it helps alleviate the symptoms, then it would help the patients feel better and stronger,” Guardo said.

“This is one way of decongesting our hospitals since we no longer have to bring patients there since they already managed to eliminate the symptoms of the disease at the isolation centers,” he added.

According to him, the city also received 1,000 kits donated by private companies, which were distributed to other patients and policemen who contracted the virus.

Contrary to allegations, Guardo stressed that all tuob kits from the city government and private entities were distributed for free to coronavirus patients.

“I did not sell any of these. We have the records to show that everything was distributed according to the number of patients in the isolation centers,” he said.

Guardo said the tuob kits were distributed to 25 BICs in the city. Barangay Mambaling got most of the kits due to the high number of cases in the village.

“I’ve really been pushing for alternative medicine especially that many of our constituents could not afford the costs of having to spend some time in the hospital to fight the disease,” he said.

But a coronavirus survivor criticized the city’s decision to purchase tuob kits when it could have spent the money to buy medicines for critically ill COVID-19 patients.

“During the critical period when the risk for intubation and other complications were high and I was already in a cytokine storm, a very important drug, Tocilizumab (Actemra) was badly needed. I still believed this was a turning point in my battle against this disease,” he said in a post on Facebook.

The drug costs P40,000 to P60,000 for one vial. The government hospital where he was admitted, however, ran out of the medicine.

He said he was happy that a politician, not from Cebu, donated 24 vials of the drug to the hospital.

“He had no Bisaya blood in him at all yet he chose the correct thing to donate. It practically saved my life as the improvement postinfusion was dramatic,” he said.

Governor Garcia is set to institutionalize steam inhalation, as well as other traditional and alternative ways, to boost the immune system and help contain the spread of the virus.

She has ordered some 16,000 barangay health workers in Cebu’s 44 towns and seven cities to undergo training for these methods under the direction of the Provincial Traditional Health Care System.

The Philippine Medical Association, an umbrella organization of physicians in the Philippines, earlier denounced the practice of tuob, saying it did not help kill viruses, including the SARS-CoV-2 that causes COVID-19.