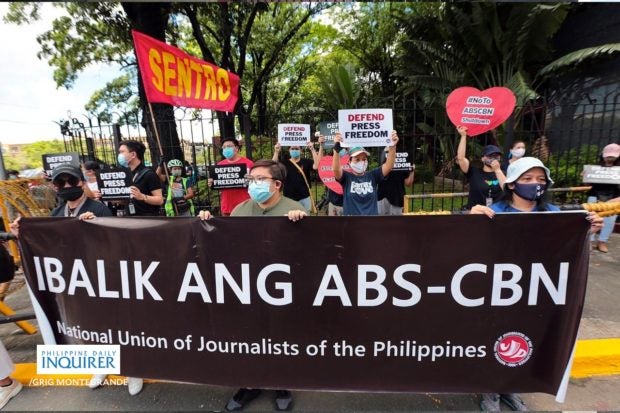 ABS-CBN employees and supporters stage a caravan protest at the House of Representatives on Thursday, July 9, to appeal the broadcast network’s application for renewal of its franchise as the House committee prepare for a summation of the 12 hearings it undertook on whether to grant the network another 25-year franchise.-INQUIRER FILE PHOTO / GRIG C. MONTEGRANDE

MANILA, Philippines — The lawmakers who sponsored various bills seeking to grant ABS-CBN its new 25-year franchise have insisted that all questions posed against the network have been answered.

In a joint statement posted on Twitter by Kabataan Rep. Sarah Elago — one of the 16 sponsors — they claimed that ABS-CBN has complied with provisions and requirements and is deserving of a new franchise.

“We, the 16 sponsors of various bills and resolutions seeking to renew the franchise of ABS-CBN Corporation, have found that ABS-CBN has fully complied with the provisions and requirements of its previous franchise and deserves a new 25-year franchise that will enable it to continue its long tradition of broadcast excellence in the service of the Filipino,” the lawmakers said.

The sponsors mentioned the issues thrown against ABS-CBN, from constitutional provisions allowing the ABS-CBN’s franchise renewal to questions on the citizenship of its chairman emeritus Eugenio Lopez III, allegations of foreign ownership, tax issues, and the legality of shifting to a digital broadcasting scheme.

But also, they stressed that resuming ABS-CBN’s operations will be essential today, as timely exchange of information would be important during the COVID-19 pandemic.

“ABS-CBN’s reach is unparalleled, it reaches 90% or 86 million Filipinos who belong to 19 million households out of 21 million nationwide and over 3 million overseas […] Now, more than ever, in this time of a pandemic, we need a vibrant and independent source of information and news to tell the people what is going on,” the lawmakers added.

The statement from the sponsors came amid rumors that members of the House committee on legislative franchises and House officials acting as ex-officio members may vote on the franchise bill at the committee level.

Previously, Albay 1st District Rep. Edcel Lagman said that ABS-CBN has scored an 8-0 sweep in terms of the franchise issues thrown against them.

But as of now, the fate of the network, which has ceased free television and radio broadcasts since May 5 due to a cease and desist order from the National Telecommunications Commission (NTC), remains in question.

NTC’s order came despite previous pronouncements in front of Congress last February that ABS-CBN would continue operating.  NTC Deputy Commissioner Edgardo Cabarios admitted that the order came after questions on the validity of the network’s franchise were raised.

Cabarios did not explicitly mention what particular questions were thrown against the franchise, but Solicitor General Jose Calida filed a quo warranto petition last February against ABS-CBN, for allegedly hiding foreign ownership behind a corporate veil.