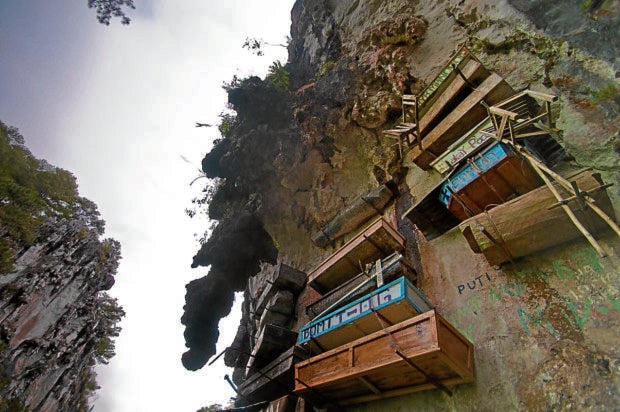 SAGADA ATTRACTION The hanging coffins and caves are among the attractions that draw tourists to scenic Sagada in Mountain Province. The rustic town has become popular due to its rich culture and its pine forests, quaint cafés and inns, and breathtaking sunrise. —RICHARD BALONGLONG

BAGUIO CITY, Benguet, Philippines —Being an “adopted son” of Sagada, Mountain Province, did not help actor Piolo Pascual in entering the popular tourist town where he was supposed to shoot video footage for President Rodrigo Duterte’s State of the Nation Address (SONA) on July 27.

Pascual was part of the team that movie director Joyce Bernal took to Sagada on Sunday to film some materials that would be used as background for the Sona.

The team was given an authorization letter signed by Dennis Wilfred Pabalan, executive director of the Malacañang Presidential Broadcast Staff-Radio Television Malacañang, to proceed with the shoot.

But Vice Mayor Felicito Dula said Pascual and Bernal, including their crew, were still refused entry due to the ongoing strict health protocols to prevent the spread of the new coronavirus disease (COVID-19).

Dula cited the municipal council’s resolution prohibiting the booking of guests and tourism-related activities. It also barred the entry of nonresidents from areas with high COVID-19 cases such as Metro Manila, he said.

“The strict implementation [of the ban] on the entry of all persons outside Mountain Province to Sagada has been effective in maintaining the municipality as a COVID-19-free community,” Dula said in a July 5 letter to Bernal’s team.

Officials of the municipal disaster risk reduction and management office (MDRRMO) called for an emergency meeting while Bernal’s team was in Sagada.

Bernal, Pascual and their crew tried to check in at Sagada Heritage Village but were turned away by the hotel management, citing restrictions on tourists. They tried another inn, Sagada Cellar Door.

Municipal officials said they asked Bernal to join the MDRRMO meeting where they told her to drop the plan to shoot in the town.

Bernal apologized to them but appealed that her team be allowed to stay for the night, which the local COVID-19 task force granted, according to Sagada Mayor James Pooten Jr.

“There are two options being discussed. The President can physically go there (Batasan) but with only 50 members of Congress both from the House of Representatives and the Senate. Or it can be a live telecast, but still at reduced capacity,” Roque said.

—With a report from Julie M. Aurelio