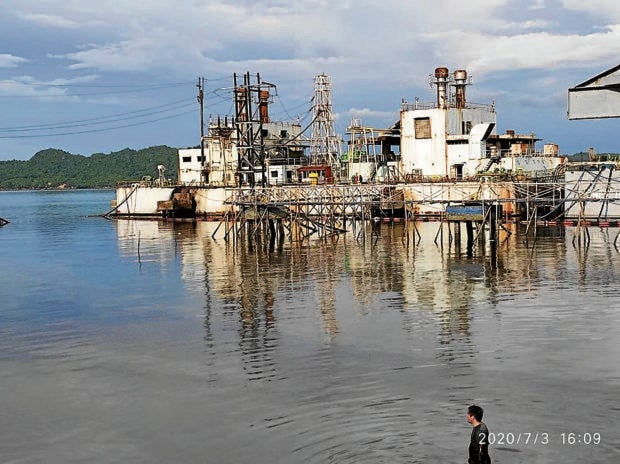 SPILL IMPACT The power firm operating Power Barge 102 off Iloilo City has tapped a team of consultants and marine scientists to assess the impact of the oil spill on the waters and health of communities in Iloilo and Guimaras affected by the accident. PHOTO COURTESY OF BFP-ILOILO CITY

ILOILO CITY, Iloilo, Philippines — Fourteen years after Guimaras was devastated by the worst oil spill in the country when the MT Solar I tanker sank, residents of the island-province are again trying to contain the spread of bunker fuel that leaked on Saturday from a damaged power barge in nearby Iloilo.

“We are trying to contain it. But residents of coastal barangays have also stopped fishing and shell gathering because their nets and boats are coated with oil,” Mayor Eugene Reyes of Buenavista town in Guimaras, told the Inquirer on Monday.

Reyes said 17 of 30 villages in his town were affected.

The Guimaras Provincial Disaster Risk Reduction and Management Office reported that 20 villages in the province reported the presence of oil sludge or sheen.

Gov. Samuel Gumarin also raised concern over the environmental and health impact of the accident.

Aside from Guimaras, three coastal villages of Iloilo City, and the towns of Leganes and Dumangas in Iloilo province are affected by the spill.

As of 10 a.m. on Monday, 125 families or 434 people had been evacuated from three villages in the city, according to a report of the Iloilo City Risk Reduction Management Office.

AC Energy Inc., the Ayala group subsidiary that owns Power Barge 102, said the cleanup of the oil spill could take 10 to 15 days.

In a statement, AC Energy said it was working with contractor Harbor Star to finish the cleanup of affected nearshore and offshore areas, particularly to recover and safely disperse any remaining oil.

The Ayala unit has also received help from other energy firms, including Petron, Shell and Global Business Power, as well as the Philippine Coast Guard.

AC Energy said fuel oil was discharged in the afternoon of July 3 from the power barge anchored off Barangay Obrero in Iloilo City.

“The root cause is yet to be determined, but initial findings reveal that the discharge is attributable to ignition of fuel oil in storage which ruptured the barge’s fuel tank,” the company said.

The leakage was contained at 10 p.m. of the same day, but some fuel oil were swept out of the containment area by strong waves.

Gabino Ramon Mejia, head of plant operations of AC Energy, told reporters in Iloilo City on Monday that the company was investigating the cause of the explosion.

Mejia and a team of consultants and marine scientists arrived in the city to study the path of the oil spill and its impact on the environment.

“We are committed to exert all available means to clean up any remaining residue as soon as possible and support the affected communities,” AC Energy said.

The company has hired residents of affected barangays in Iloilo City to help in cleanup under a cash-for-work scheme.

They will be paid P500 per day, higher than the minimum daily wage rate in Western Visayas, and will be provided with protective equipment, including boots, masks and suits.

Mejia said the scheme would be adopted in Guimaras and other affected areas.

“We are 101-percent committed to the cleanup. This is an accident that nobody wanted to happen. We are coordinating and cooperating with the authorities,” he said.

AC energy said it was providing affected families with food, health care and other needs. It is also working on further relocation to other nearby schools to observe physical distancing.Environmental group Greenpeace Philippines said the spill should push power companies to rethink their businesses and shift to renewable energy sources to prevent a similar marine disaster.

Khevin Yu, the group’s energy campaigner, said the oil spill presented a big threat to the marine life and to the health and livelihood of communities in Iloilo and Guimaras provinces, who were struggling amid the new coronavirus disease pandemic.

Joey Papa, president of Bangon Kalikasan, said: “If the explosion is an accident, all power barges in the country should immediately be inspected to avoid a repeat of the disaster.”

On Sunday, the Department of Environment and Natural Resources said it would determine the fines to be imposed on the company.

—With a report from Jhesset O. Enano