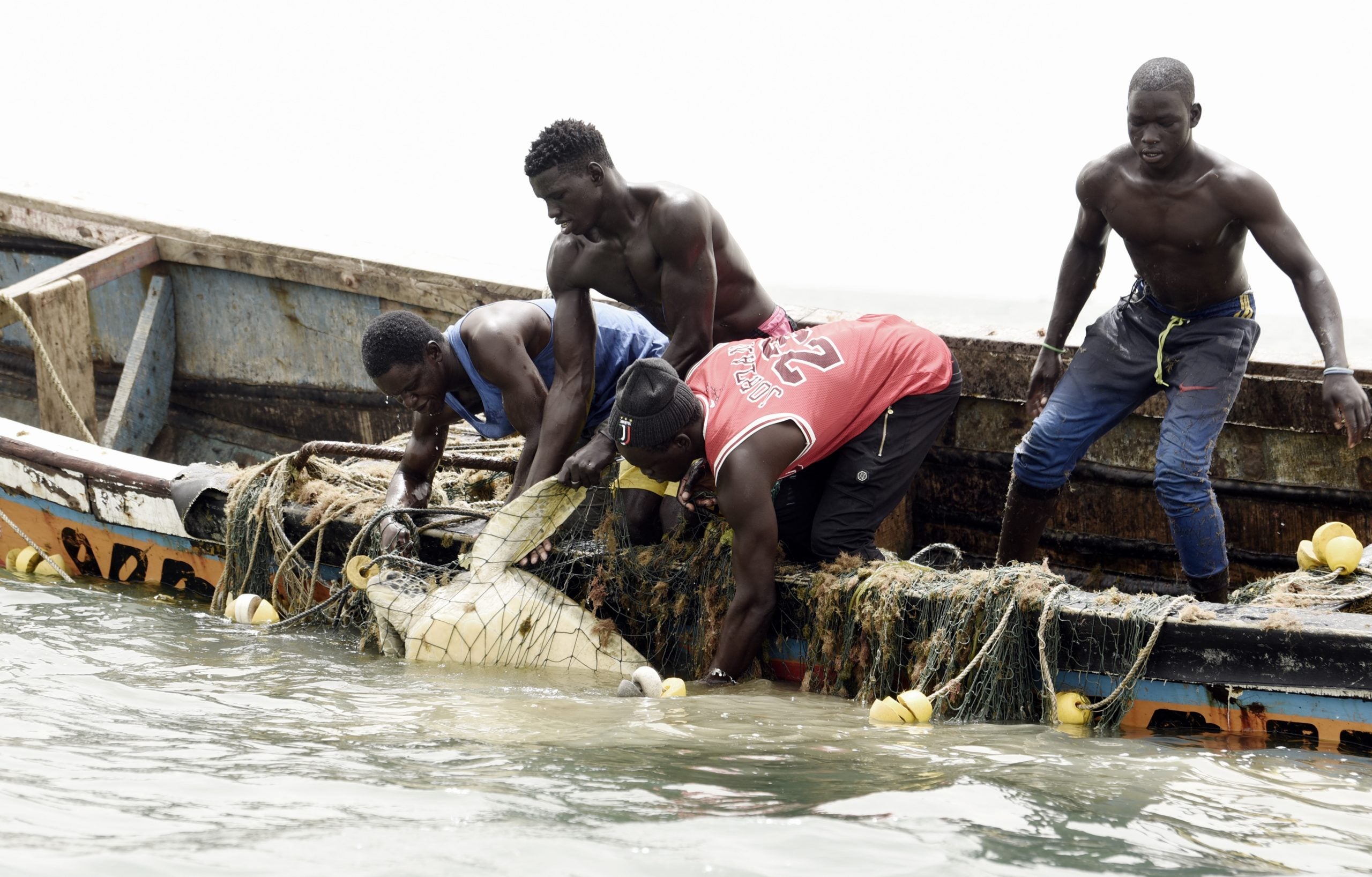 Senegalese fishermen save a sea turtle from their fishing nets in Joal, Senegal, on June 16, 2020, where people are being made aware of the importance to save endangered species, which regulate the ecosystem and help maintain fish abundance. (AFP)

JOAL-FADIOUTH, Senegal–In a classic case of “poacher turning gamekeeper”, the fishermen of Senegal have joined forces to protect one of the ocean’s most endangered species — the sea turtle.

Three species can be found on the Senegal coast in West Africa. The most populous is the green turtle and they are joined by the loggerhead and leatherhead which can weigh over 600 kilograms.

They are all beautiful creatures but each is threatened by pollution, poaching and, even now, the fishing net.

“Once we were the biggest eaters of turtles, now we have become their biggest protectors,” says Abdou Karim Sall, a fisherman who is now the manager of a protected marine zone through which the turtles pass.

Some 30 years ago, turtle meat was sold in the streets of Joal, one of the most important fishing ports in Senegal, and in Fadiouth, the port’s sister village built on an artificial island made from heaps of shells.

“We ate them in the street, we cooked them at home,” says the 56-year-old Sall who leads the management committee for the Marine Protected Area (MPA) of Joal-Fadiouth, two hours south of Dakar.

Founded in 2004, and backed by the government, local authorities and several associations, the MPA stretches over 147 square kilometers (57 square miles) and is made up of sandy beaches along a marine strip eight kilometers wide, as well as a network of mangroves and an area of savannah.

It is an area for the protection of endangered migratory species, such as the sea turtle.

Its objectives are the conservation of biodiversity, as well as the improvement of fishing yields and socio-economic benefits for the local population.

The sea turtles navigate their way along this tropical stretch of the Atlantic during their migration of more than a thousand kilometers between the volcanic archipelago of Cape Verde and Guinea-Bissau, just south of Senegal, where they return to lay eggs when they reach sexual maturity.

The green turtles are predominantly herbivorous while the other species like to snack on crab and sea urchin.

They all graze on the sea grass beds that grow abundantly in the shallow waters of the Senegalese “Petite cote” (small coast), especially in front of Joal.

Through their presence, the turtles help maintain a fragile biotope, a breeding ground and nursery for many species of fish and this, in turn, boosts the economy — the fishing sector directly or indirectly supports about 500,000 Senegalese.

Trapped in a net

The sea turtles’ long voyage is not without risk.

Plastic is an increasing danger as they often mistake plastic bags for jellyfish which is one of their favorite foods, even for the green turtle. And, in spite of the efforts of Sall and the other protectors, they also get caught in fishermen’s nets.

On a dugout canoe with a multicolored hull at the limit of the protected area, four young bare-chested lads haul in their nets. It is the start of the migration period and they have snagged a 100-kilogram turtle.

It takes a big pull to haul it in. They untangle the turtle from the nets and release it back into the water.

“It’s not to our advantage to eat them, because they help save marine species. Wherever you find turtles you will find shrimp and octopus in abundance,” explains the boss Gamar Kane.

Since 2000, Sall, as head of the local fishermen’s association and manager of the MPA, has made local populations aware of the protection of turtles, in particular by organizing “cinema debates”.

Even former turtle sellers have been “converted” by receiving “three small canoes to take tourists to sea,” he said.

According to Sall, turtle numbers have “decreased by around 30 percent in the past 20 years” but the 500-odd visitors who come each year are almost guaranteed a memorable photo of some of the thousands that still line the coast. With luck, they might also spot a manatee (sea cow) grazing peacefully in the depths.

Rather than imposing restrictions, the MPA is trying to educate the communities in the economic benefits so that they join the project.

“It’s after they are told: ‘It’s an endangered species’,” he says.

From June to October, a few dozen turtles stop to lay eggs on the beaches of Joal. About 20 MPA agents and village volunteers protect their nests with fences.

About 45 days later, “people come at 6:00 am so that predators do not take the young”, says Sall.

The danger lies largely at the feet of monitor lizards who like the eggs, the birds who swoop down just after the young turtles have hatched and the monkfish who move in once they enter the sea. The chances of survival for a young turtle are no greater than one in a thousand, says Sall.

But the fisherman-conservator agrees, “awareness has not worked 100 percent”.

“Not all fishermen have turned away from turtles and when the fishing is not good, some even hunt them,” he says.

They can take dozens a day, or more, to pay for  fuel for their outboard engines. And there remains a taste among the human population for turtle flesh — and other parts.

At the end of June, the corpse of a young green turtle was found on a beach in Dakar, its belly cut down its entire length.

“Its tail and reproductive system were removed for ‘medicinal’ reasons,” said Charlotte Thomas, an official with the Senegalese NGO Oceanium.

The struggle to protect the sea turtle goes on.