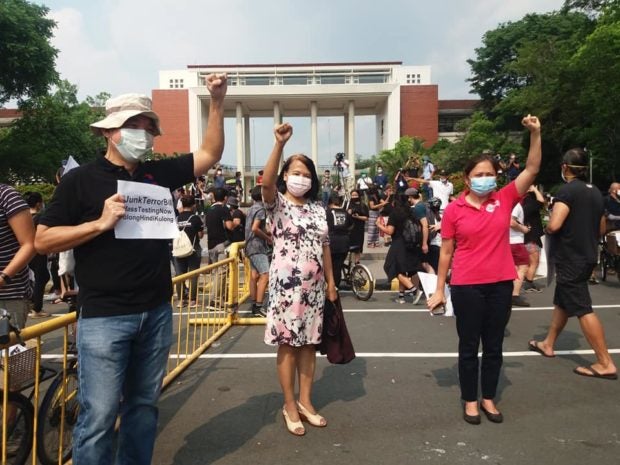 Makabayan bloc lawmakers join the indignation protest against the Anti-Terrorism Bill inside the UP Diliman campus in June. File photo / Kodao Productions

MANILA, Philippines — Members of various activist groups have announced that they would be staging an indignation rally on Saturday against the enactment of the Anti-Terrorism Law inside the University of the Philippines – Diliman campus.

According to several posts from Anakbayan and Movement Against Tyranny (MAT), the groups would start converging at the University Avenue corner C.P. Garcia Avenue at around 1:00 p.m.

“Youth groups led by Anakbayan, League of Filipino Students (LFS), Student Christian Movement of the Philippines (SCM), National Union of Students of the  Philippines (NUSP), College Editors Guild of the Philippines (CEGP), Kabataan Party-list, and Youth Act Now Against Tyranny (YANAT) are set to hold a program before the main multisectoral indignation rally against the signing of the Anti-Terror Law,” Anakbayan said.

This is not the first protest staged by various civil society groups against the Anti-Terror Law, then still a piece of legislation passed by both the House of Representatives and Senate.

Despite rains and warnings from authorities not to engage in protests due to the COVID-19 threat, protesters went to UP Diliman last June 12, Independence Day, using a ‘mañanita’ as an excuse.

Earlier, Presidential spokesperson Harry Roque confirmed that President Rodrigo Duterte has already signed the bill into law.  According to several senators, the signing of the law is timely considering the threat of terrorism, from extremist groups and communist rebels in the country.

However, the anti-terror bill has drawn attention from different groups including the international community due to fears that it may be used against people expressing legitimate dissent about the government’s policies.

Supporters of the bill, including Defense Secretary Delfin Lorenzana, clarified though that the law has enough safeguards to ensure that human rights would not be violated.