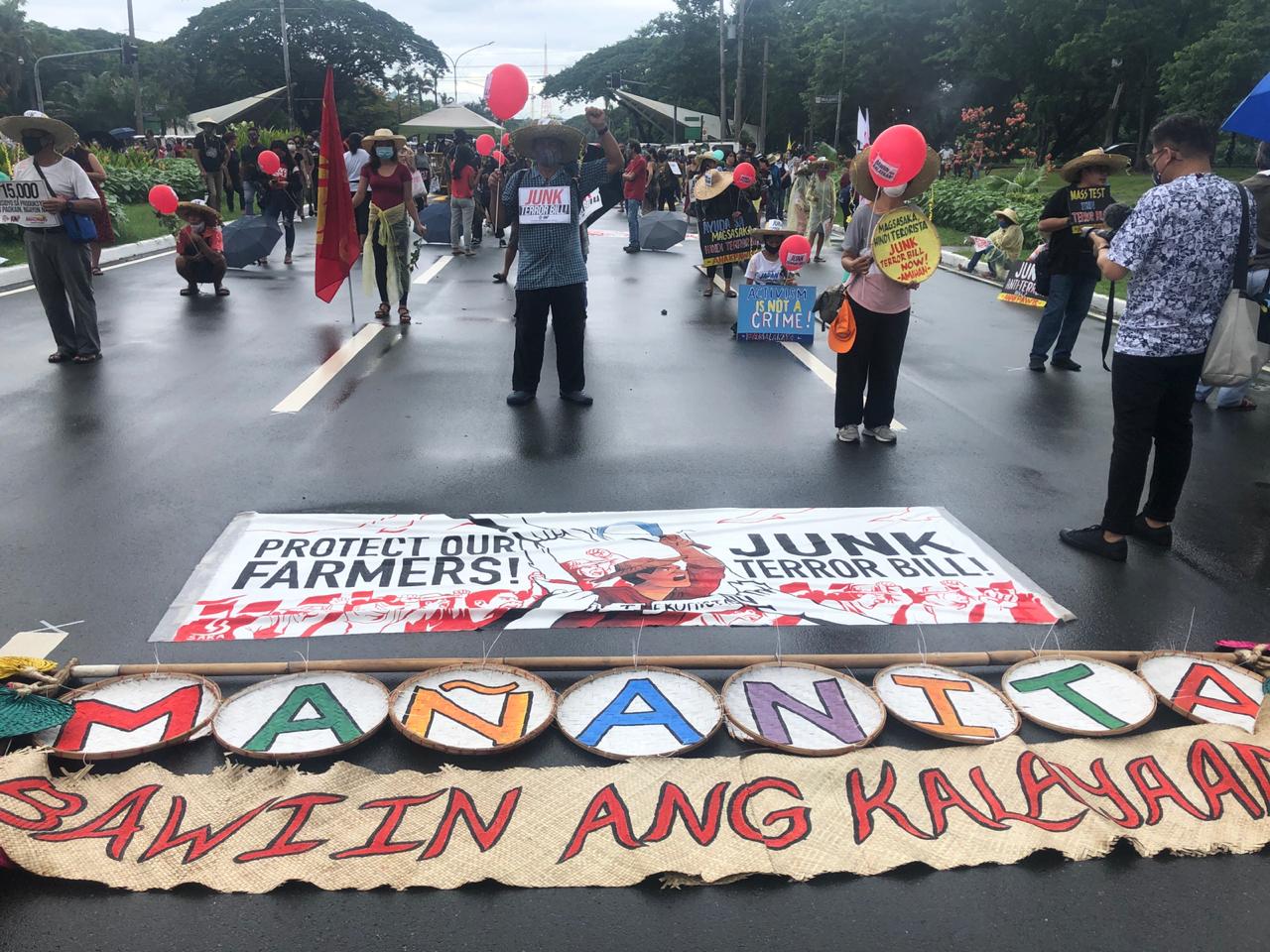 MANILA, Philippines — Despite warnings from authorities not to hold rallies and mass gatherings during the community quarantine, members of progressive groups gathered at the University of the Philippines campus in Diliman, Quezon City to denounce the controversial anti-terror bill as the country marked its 122nd Independence Day.

Around 5,000 people gathered at University Avenue to voice out opposition against the government’s push for the proposed measure, said Renato Reyes, Secretary-General of the Bagong Alyansang Makabayan, citing information from the Advocates of Science and Technology for the People (Agham).

“Scientist group Agham estimates that with people observing physical distancing and with crowd reaching from Quezon Hall to the checkpoint, mañanita participants reached around 5,000,” he said in a text message.

Data from the Quezon City Police District showed the crowd estimate at the site was already at 700 participants at the start of the program at 10 a.m. As of posting time, the QCPD has yet to release an updated estimated number of protesters joining the event which ended at around 12 noon.

The protest was themed after the much-criticized birthday mañanita of Maj. Gen. Debold Sinas, director of the National Capital Region Police Office (NCRPO), where dozens of police officials and officers gathered at Camp Bagong Diwa in Taguig City to greet him on his birthday on May 8, in violation of the ban on mass gatherings.

Among the groups that led the “Grand Mañanita” program included the Congress of Teachers/Educators for Nationalism and Democracy, Movement Against Tyranny, Gabriela Youth, Anakbayan – Albertus Magnus, Kilusang Mayo Uno Metro Manila, Concerned Artists of the Philippines, College Editors Guild of the Philippines, and Anakpawis Partylist, among others.

Many of the protesters wore black shirts to demonstrate their objection to the anti-terror bill which they claim, could be used by the government to silence dissent.

On the eve of Independence Day, Justice Secretary Menardo Guevarra warned that actual “physical” rallies will be “temporarily banned” during the coronavirus crisis to protect public health.

“Violations may give rise to penal sanctions under existing public health laws, not under criminal laws. As (Interior) Sec. (Eduardo) Año said, there are safer ways to express one’s protest during this period of public health emergency,” he said on Thursday.

However, the National Union of People’s Lawyers explained that the Bayanihan to Heal as One Act and the law on mandatory reporting of notifiable diseases do not have provisions allowing arrests due to alleged violations of quarantine rules or the prohibition on mass gatherings.

He also noted that the number of protesters who attended the anti-terror bill protest despite the COVID-19 situation and warnings from authorities is “inspiring,” especially with the number of youth who joined.

Meanwhile, Erin Tañada, Liberal Party vice president for external affairs, said that protests for this year’s Independence Day celebration showed that the spirit of freedom is still alive in the country.

(We should celebrate since talks on freedom are still very much alive in the country.)

For his part, Reyes said the government is to blame on why some Filipinos still held rallies despite warnings from authorities.

Reyes stressed the importance of speaking against the anti-terror bill before it can be passed into law.

He added they have not received any report of protesters being arrested during the event.