Groups protest Anti-Terror Bill passage at UP rally despite quarantine

MANILA, Philippines — Various organizations staged a protest Thursday in Quezon City, calling for the junking of the Anti-Terror Bill.

Led by groups like Bagong Alyansang Makabayan (Bayan), Anakbayan and Kilusang Mayo Uno, demonstrators were able to hold rallies at various areas in the University of the Philippines-Diliman (UP Diliman) campus despite the prevailing general community quarantine.

The controversial proposed measure is now up for President Rodrigo Duterte’s signature as the House of Representatives adopted Wednesday night the Senate’s version of the bill. The Senate approved the proposed law in February.

Duterte has certified as urgent the approval of the Anti-Terror Bill even as the country grapples the COVID-19 crisis. And since the House approved the bill rejecting all suggested amendments and merely embracing the Senate version, there is no longer a need for a bicameral conference.

Videos from Anakbayan and alternative media site Kodao showed protesters marching from UP Diliman to the Commission on Human Rights (CHR) office along Commonwealth Avenue, asking Congress to repeal House Bill No. 6875, which seeks to strengthen the Human Security Act of 2007.

Organizers insisted though that the protest followed health protocols to avoid local coronavirus transmissions, like physical and social distancing and the wearing of face masks.

Bayan secretary-general Renato Reyes at the end of the program hinted that another protest will be carried out on June 12, Independence Day, to voice concerns over the Anti-Terror Bill — which many believe may be used to silence critics. 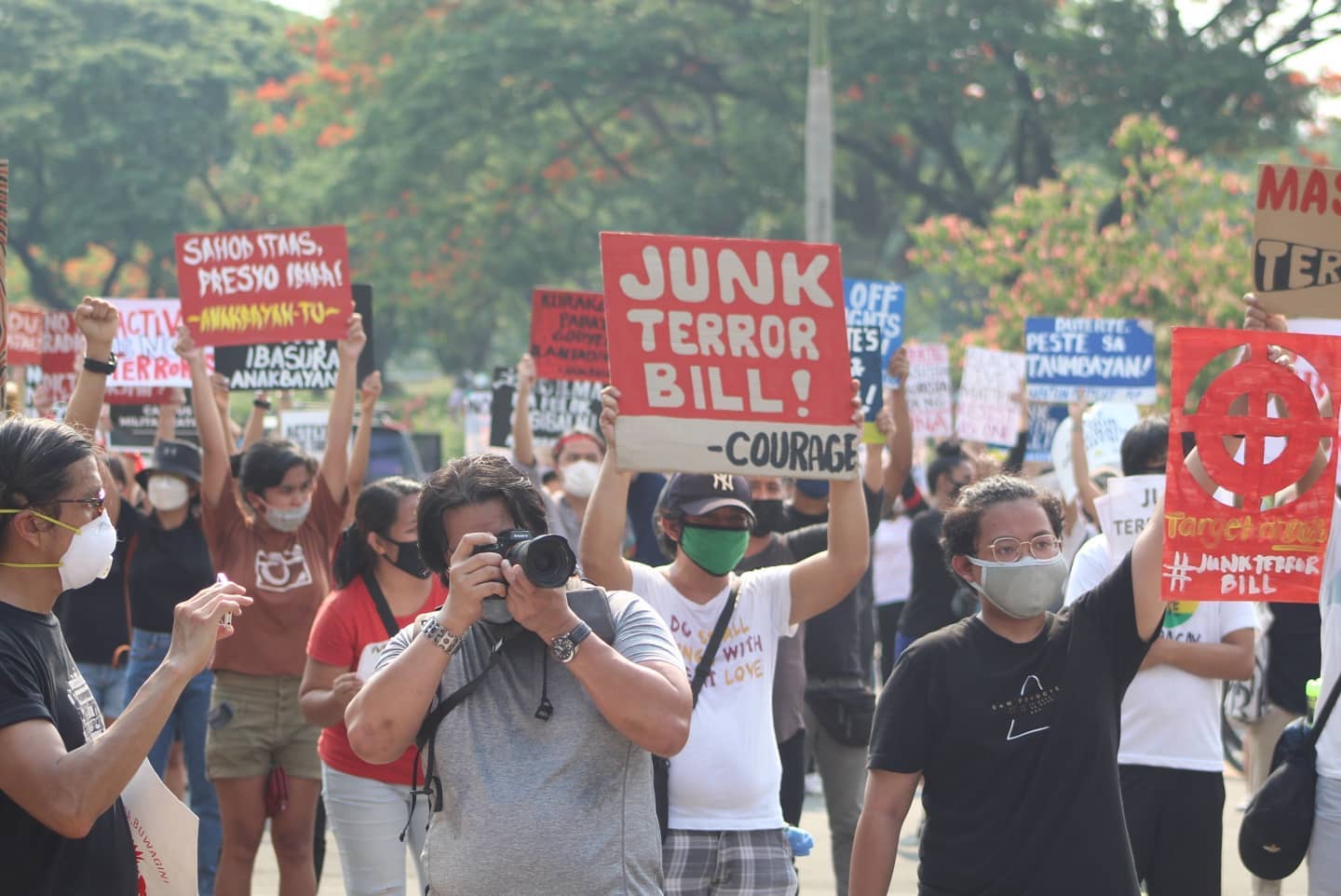 INQUIRER.net has sought the side of Join Task Force COVID Shield commander police Lt. Gen. Guillermo Eleazar and the Inter-Agency Task Force on Emerging Infectious Diseases (IATF) on whether such gatherings are allowed, given that the coronavirus infections in the country remain on the rise. But Eleazar and IATF have yet to respond to INQUIRER.net’s query as of this posting.

CHR, Vice President Leni Robredo, and other human rights advocates and civil society groups have questioned the timing of the proposed law’s passage and raised alarm over provisions of the Anti-Terror Bill, saying they are vague and may ultimately lead to twisted interpretations, therefore targeting even legitimate dissent.

But administration officials and supporters of the bill assured that the bill has stipulations that safeguard against abuse, with Defense Secretary Delfin Lorenzana even saying its provisions ensure the protection of human rights.