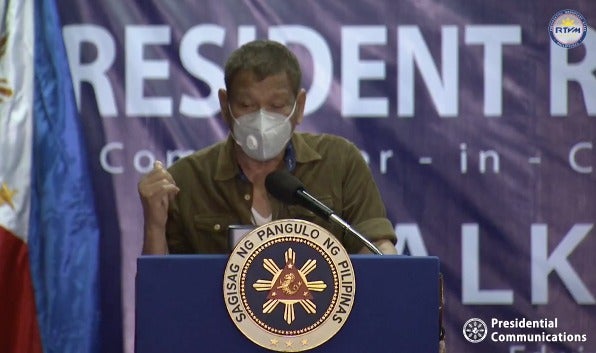 A screengrab from a live feed of President Rodrigo Duterte’s speech during a meeting with troops in Zamboanga City on Friday, July 3, 2020. RTVM Video

MANILA, Philippines — In an apparent attempt to pacify the brewing tension between the military and the police, President Rodrigo Duterte on Friday appealed for “calm” and “understanding” as he implored the nation’s security forces to wait for the result of the National Bureau of Investigation’s (NBI) probe on the June 29 incident.

“I’m pleading, nakikiusap ako… (help me) to keep the waters in the meantime calm while we wait for the result of the investigation. ‘Yan ang pinuntahan ko dito. Kasi mahal ko ang sundalo ko, mahal ko din ang pulis ko puro nagtatrabaho,” Duterte said in a speech before the troops in Zamboanga City in the wake of the Sulu “shooting incident” where four of the army’s intelligence operatives were killed by police officers.

(I’m pleading, I’m begging you (help me) keep the waters in the meantime calm while we wait for the result of the investigation. That’s why I’m here. I love my soldier, I also love my police officers.)

While he noted that he cannot stop the Armed Forces of the Philippines (AFP) to avenge their fallen comrades, Duterte told them that escalating the situation will not help the country.

“Let us not lose sight of reality. Alam ko na talagang gusto niyong umupak din eh. Pero at the end of the day, I will ask you simply: ‘What good [would] it do for all of us and for our country?’,” the President said.

(Let us not lose sight of the reality. I know you really want to avenge your comrade. But at the end of the day, I will simply ask you: ‘What good [would] it do for all of us and for our country?)

Army spokesperson Col. Ramon Zagala said the four men who were fatally shot by Jolo policemen on Monday “were in the middle of a mission to capture the suspected bombers.”

The police initially described the incident as a “misencounter” but Army commander Lt. Gen. Gilbert Gapay rejected the explanation and called it a “rubout“.

The chief of Jolo Municipal police was already relieved along with the nine police officers involved in the killing of the soldiers.

The President then directed the NBI to get to the bottom of the incident and reveal nothing but the “truth”.

“I have my own misgivings about the whole thing. But pending the release, pending the investigation of the NBI we all must just keep our silence and hope that the NBI would find the truth for us,” Duterte said.

“Trabaho nila ‘yan. And I’m sure that they would not fail me…ang sabi ko get the truth. Huwag mong sobrahan, ‘wag mong kulangan, ‘yung totoo lang because it will save us the trouble,” he added.

(It’s their job. And I’m sure that they would not fail me. I said ‘get the truth. Nothing more, nothing less’. Just the truth because it will save us the trouble.)