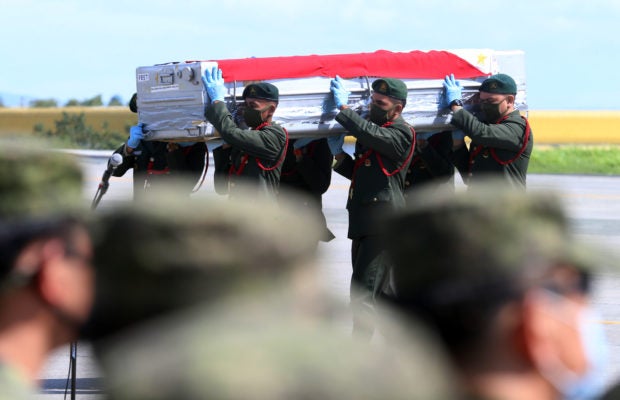 HONORS FOR THE FALLEN The remains of three of the four Army intelligence officers shot dead by the police in Jolo, Sulu, on Sunday arrive at Villamor Air Base on Tuesday. (Photo by EDWIN BACASMAS / Philippine Daily Inquirer)

MANILA, Philippines — Not only did the military lose four accomplished intelligence operatives, but it also lost the trail of two suspected bombers in Jolo, the Armed Forces of the Philippines said on Wednesday.

Army spokesperson Col. Ramon Zagala told the Inquirer that the four men who were fatally shot by Jolo policemen on Monday “were in the middle of a mission to capture the suspected bombers.”

PNP spokesperson Brig. Gen. Bernard Banac on Wednesday said that after reviewing the initial report, the killing was “deemed a shooting incident.”

Gapay and other Army officials denied the police claim that the men had pointed their weapons at the policemen when they were shot in self-defense. They said as intelligence officers on a clandestine operation had to keep their guns hidden under the car seats to avoid being seen, especially in a place as volatile as Sulu.

According to Gapay, the team led by Indammog, who was commanding officer of the 9th Intelligence Service Unit in Sulu, was on the trail of the two suspected bombers.

“We have identified the location [of the two suspects]. We were just pinpointing the exact area when this happened,” he said.

“Imagine the lost opportunity there. Two bombers who were supposed to be captured and neutralized were able to slip and you know the potential of these two bombers of sowing terror and executing terrorist acts again. It’s such a waste,” Gapay said.

Indammog’s group was heading back to their headquarters in Jolo from nearby Patikul when they were stopped at a checkpoint. The Army said Indammog identified himself and showed his identification card, but they were still directed to head to the Jolo police station.

Near the station, the group stopped their car and Indammog got off and was shot moments later. The other operatives were also shot dead.

Maj. Gen. Corleto Vinluan, commander of Joint Task Force Sulu, earlier said that the deaths of Indammog, 39, and his men were “a big loss not just for us, but to Sulu in general.”

Indammog and his group were instrumental in some of the successful campaigns against Abu Sayyaf terrorists, he said.

Vinluan said the slain major’s team developed the intelligence packets and reports that led to successful operations like the rescue of British-Filipino couple Allan and Wilma Hyrons and the rescue of three Indonesian kidnap victims; the neutralization of several key Abu personalities like Abu Talha and their links to the Islamic State’s financing; the neutralization of two Egyptian suicide bombers; and the identification of Abu Sayyaf locations that led to numerous successful combat operations.

Lt. Gen. Cirilito Sobejana, commander of the military’s Western Mindanao Command, had requested the National Bureau of Investigation to lead an impartial investigation “to ferret out the truth.”President Duterte plans to meet military and police commanders in Jolo as well as with the police officers involved in the Jolo shooting, according to his spokesperson Harry Roque.

Roque said Mr. Duterte was very saddened by the “misencounter” in Jolo and ordered the NBI to fast-track its investigation.

“He was very sad. What he said was he felt weak, extremely sad, and he wanted to go to the place where it took place, if possible, because he wanted to lift the morale of the soldiers because it seems the morale of our soldiers is low,” Roque said in an interview over ‘“Unang Hirit.”

Police chief not quitting“Those who share the same ideology should not be killing each other. And he said he hopes this would be the last misencounter during his term,” he added.

Roque did not say when the meeting would take place. Police Col. Michael Bayawan, Sulu provincial director, said he was “deeply saddened” by the shooting but he brushed aside calls for him to leave his post. He said he would only do so “if there is an order for me to step down.”

Bayawan said the nine police officers involved in the incident were in his custody and were “very cooperative in the ongoing investigation.”

Antonio Pagatpat, the NBI deputy director for regional operations service, said the PNP and Army reports conflicted each other.

The team had requested a chemist and a ballistician, he said, adding that he expected a report in 10 days.

They started processing information from two eyewitnesses, including another operative in Indammog’s team, who was traveling separately on a motorcycle.

Opposition Sen. Francis Pangilinan on Wednesday said he was disturbed by the incident “because it appears that the police are quick in pulling the trigger without careful judgment.”

“If they can do this to their fellow uniformed men, how much more to the ordinary civilians who are unarmed and defenseless?” he said.

Sen. Panfilo Lacson, a former PNP chief, warned that the “legal fronts” of the communist insurgents and local terrorists may take advantage of the incident to create a rift between the two main security forces.

“Ultimately, decisiveness, not divisiveness, is needed in dealing with the enemies of the State and the Filipino people,” he said.

A House leader on Wednesday was also disturbed by the PNP’s initial attempt to characterize the killing of four Army soldiers as a “misencounter,” saying it was not only premature but “reckless and very irresponsible.”

“The usage of the term misencounter looks like an early indication of a whitewash,” said Pwersa ng Bayaning Atleta Rep. Jericho Nograles.

“The PNP should know better and choose words carefully because this is like adding insult to injury to the family and the brothers-in-arms of the whole Armed Forces of the Philippines,” said Nograles, a vice chair of the energy and youth and sports development committees.