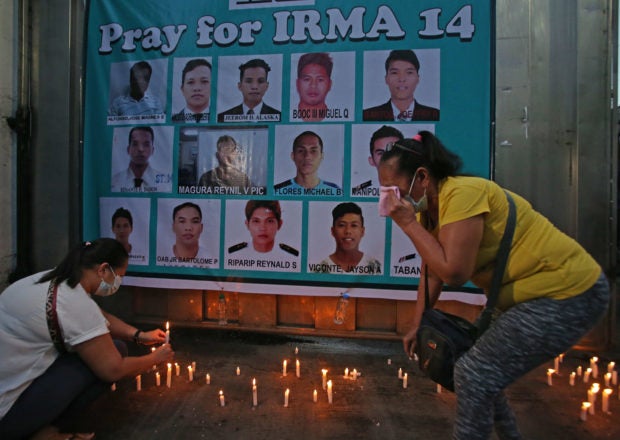 PRAYERS FOR THE MISSING | Family members on Wednesday light candles for the 12 crewmen and two passengers of the fishing vessel Liberty 5 who remain missing after their boat collided with the Hong Kong-flagged cargo ship Vienna Wood and sank in the waters off Mamburao, Occidental Mindoro, late Saturday. The prayer gathering was held at the office of Irma Fishing and Trading Inc. in Barangay Longos, Malabon City. (Photo by RICHARD A. REYES / Philippine Daily Inquirer)

MANILA, Philippines — As of Wednesday afternoon, there was still “no sighting of survivors” in the weekend collision between the fishing vessel Liberty 5 and the Hong Kong-flagged cargo ship Vienna Wood, said Philippine Coast Guard (PCG) spokesperson Commodore Armand Balilo.

Search and rescue operations for the vessel’s 12 fishermen and two passengers are still ongoing, with sea and aerial survey combing the coastlines of Occidental Mindoro, Balilo said.

The fishing vessel and the empty bulk carrier collided off the coast of Barangay Tayamaan in Mamburao town, Occidental Mindoro, around 1 a.m. on Sunday, although Vienna Wood’s crew sent the distress call through email some three hours after.

PCG commandant Vice Adm. George Ursabia Jr. earlier said that while the bulk carrier had enough service and lifeboats on deck, its crew did not deploy any of them to rescue or provide assistance to the fishermen and instead relied on seven smaller vessels in the area to respond.

Ursabia said if no survivor was found on Wednesday, they would decide on Thursday if rescue operations were to continue.

Meanwhile, Arnold Naval, the legal counsel for Liberty 5 owner Irma Fishing and Trading Inc., said the company would be filing charges of reckless imprudence resulting in multiple damage to property against the crew members of Vienna Wood and possible charges on loss of lives.

Naval added that the PCG’s search of the bulk carrier on Tuesday showed that it was not hiding any survivor, as initially claimed by the victims’ families. In an interview with the Inquirer on Wednesday, Fermin Soto, general manager of Irma Fishing, confirmed that the company had filed a marine protest against the owners and crew members of the 32,000-ton Vienna Wood and that criminal charges would follow.

He also slammed the crew of the Vienna Wood cargo ship, who reported the incident nearly three hours after the collision, and said that they “did not do enough” to save the fishermen.

At a press conference on Tuesday, the families of the fishermen urged the government to set aside its “friendship” with China and focus instead on finding their countrymen who were the victims of the collision. The PCG in Southern Tagalog reminded the operators involved in the sea collision to “compensate” the families of the 14 fishermen, as parties discussed a possible settlement for the sunken Liberty 5.

“If they were going to settle, they [should] settle things first with the families who may have lost their loved ones,” said PCG District Commander Leovigildo Panopio, who said that Irma Fishing and Vienna Wood operator A.M. Nomikos had yet to disclose the amount as their counsels were still negotiating insurance claims.

Panopio said he wouldn’t want to call the search off just yet, as “there are no bodies floating so the [fishermen] could still be alive.”

‍Families and friends of the missing Liberty 5 crew lighted candles and offered prayers during a vigil at the premises of Irma Fishing and Trading Inc. in Malabon on Wednesday. A poster of the 14 missing victims of the collision drew tears from their grieving relatives.

‘Should not be politicized’

In his first statement on the incident, Foreign Secretary Teodoro Locsin Jr. echoed the statement of the Chinese Embassy on Tuesday and said the collision should not be connected to the country’s territorial dispute with China in the West Philippine Sea and with last year’s ramming incident between a Chinese trawler and a Filipino fishing boat that saw 22 Filipino fishermen abandoned at sea.

The latest incident “should not be politicized because obviously this is a commercial vessel, and whether there was negligence on their part is what we’re going to determine,” Locsin said, adding that the Department of Foreign Affairs and the Department of Justice would press claims against Vienna Wood.

—With reports from Maricar Cinco and Dona Z. Pazzibugan