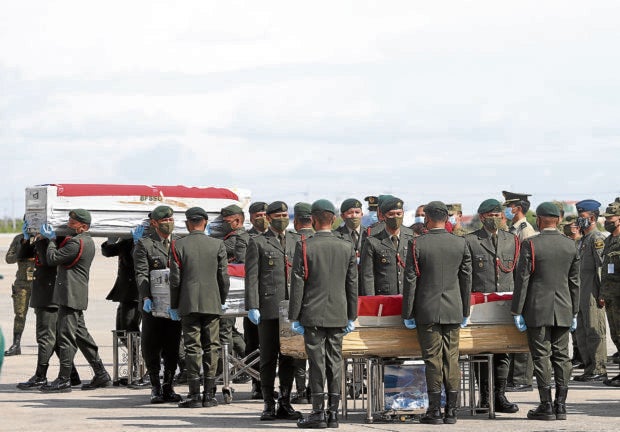 ‘IT IS MURDER’ Army soldiers hold solemn rites on Tuesday at Villamor Air Base for three of their four fallen comrades who were killed not by terrorists but police in Jolo, Sulu, a day earlier. The four Army intelligence officers were allegedly gunned down in what Lt. Gen. Gilbert Gapay, the Army commander, said was a rubout near the Jolo police headquarters. The National Bureau of Investigation is looking into the incident. —EDWIN BACASMAS

An outraged Army chief Lt. Gen. Gilbert Gapay on Tuesday denounced what he called the murder of four soldiers who were returning from an intelligence mission when they were allegedly gunned down by police officers in Jolo, Sulu.

The four men had just come from a surveillance operation against suspected terrorists in nearby Patikul town on Monday when they were shot close to the Jolo police station, according to Maj. Gen. Corleto Vinluan, commander of Joint Task Force Sulu.

Another soldier, who was riding on a motorcycle, was with the group but was unharmed.

The bodies of Maj. Marvin A. Indammog, 39, Cpt. Irwin B. Managuelod, 33, and Sgt. Jaime M. Velasco, 38, were flown on Tuesday to Villamor Air Base in Manila where they were received with honors by Army soldiers led by Gapay.

Indammog was commanding officer of the 9th Intelligence Service Unit in Sulu from Tanudan, Kalinga povince; Managuelod was a field station commander from San Pablo City, Laguna; Velasco was a close-in aide of Indammog from Santa Cruz, Manila.Indammog graduated from the Philippine Military Academy in 2006, while Managuelod graduated in 2009.

A Philippine National Police report said the incident was a “misencourter,” but Gapay rejected the police account, saying it was an unprovoked carnage.

He said the PNP Sulu provincial director and the Jolo municipal station chief must be held accountable for command responsibility.

The Army commander maintained that the initial PNP spot report was “fabricated, full of inconsistencies–like a movie and very misleading.”

Army spokesperson Col. Ramon Zagala told the Inquirer in a text message that the four soldiers were unarmed and had identified themselves as military men.

“For us, they were killed,” he said, adding that the police should have simply described the event as a “shooting incident.”

Lt. Gen. Cirilito Sobejana, commander of the Western Mindanao Command of the Armed Forces of the Philippines, had asked the National Bureau of Investigation to investigate the shooting to ensure impartiality.

The fifth intelligence officer who was on a motorcycle and one of the eyewitnesses was being interviewed by NBI investigators.

PNP spokesperson Brig. Gen. Bernard Banac told CNN Philippines the nine officers involved had been disarmed and placed under restrictive custody at the Sulu provincial police office.“No amount of explanation can ease the pain of the sorrow and grief of the families of the slain soldiers and we are committed to find out the truth and serve justice to the families of the slain officers and soldiers,” he said.

The PNP considers the incident a misencounter since the policemen “might not have been able to identify properly the soldiers as colleagues, part of the security forces.”

“This is a very big lesson for us and we will take this very seriously so this won’t happen again,” he said.

According to Vinluan, the soldiers were on a sport utility vehicle (SUV) heading back from Patikul to their headquarters in Jolo when they were stopped at a quarantine checkpoint manned by police in Barangay Bus-bus.

Indammog introduced himself as a soldier, showing his identification card, Vinluan said.

The group was instructed to proceed to the town’s police station on Marina Street in Barangay Walled City, near the Jolo municipal hall.

The policemen manning the checkpoint followed the SUV carrying the soldiers. 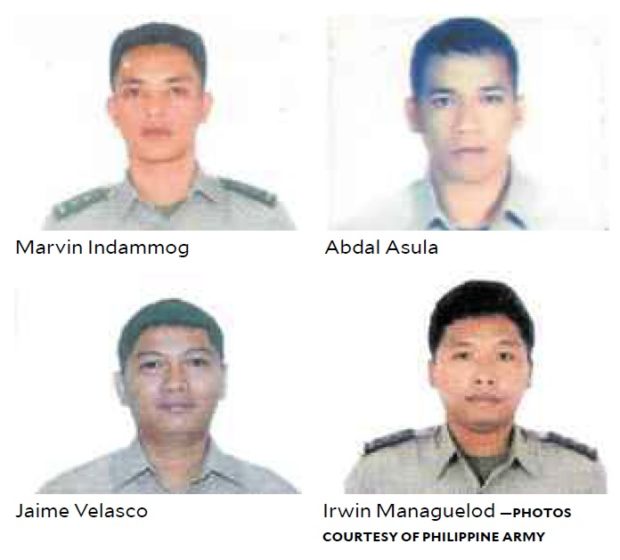 As they reached Marina street at around 2:30 p.m., the vehicle parked about 50 meters from the police station.

Indammog got off to talk to the police officers who were five meters from their SUV.“Without any provocation, they shot Indammog. Then Asula got out of the vehicle, they also shot him,” Vinluan said, citing the CCTV footage the Army was able to secure.

Velasco and Managuelod, who were not able to get out of the car, were shot at close range, Vinluan added.

An investigation report prepared by Police Staff Sgt. Abdel Haffeez Amin, said that upon reaching the police station, Indammog’s team “fled with the SUV” and the police gave chase.

The report said the soldiers disembarked from the vehicle “with their firearms … pointed towards the PNP personnel.”

“However, before they could pull the trigger, the PNP personnel were able to shoot them in defense, thus an exchange of gunfire ensued which resulted to the death of the four suspects,” the report added.

Vinluan said the CCTV footage belied the “police version” of a chase.

He added that the soldiers were not holding any firearms as they were hidden under the seats of the SUV to avoid “unnecessary attention,” especially in Sulu.

“The Army grieves and condoles with the families of our fallen men,” Gapay said, vowing that “there will be no let up in our quest for truth and justice.”

Despite his anger, Gapay said the killings “should not create animosity or friction” between soldiers and police.

“These things should bind us stronger, strengthen our working relationship with the PNP. We are all professional organizations here. So we should take all of these professionally,” he said.“It hurts us, seeing our men dead. Of course it’s part and parcel of the job but if they die unnecessarily that hurts more,” he said.

He ordered all Army camps to fly the flag at half-staff.

Sen. Panfilo Lacson, a former PNP chief, warned against disunity between the police and armed forces, saying this “would give the enemy an unwanted advantage that could prove fatal for our nation.”

Sen. Ronald Dela Rosa, also a former PNP chief, said the commanders should diffuse any tension between the two sides.

“It seems that the police is fast in pulling the triggers but lacks exercise of careful judgement,” he said.

The killing was “worrying because if this can happen to soldiers, what more to ordinary civilians,” he said.

According to Zarate, the Jolo “misencounter” presents more proof of the dangers of the Anti-Terror Bill.

Presidential spokesperson Harry Roque said Malacanang will wait for results of the NBI investigation before making a comment. —WITH REPORTS FROM LEILA B. SALAVERRIA AND JULIE M. AURELIO INQ