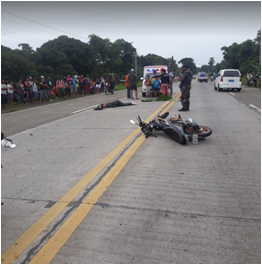 The ill-fated motorcycle that slammed into a truck in Bansalan, Davao del Sur on Saturday, June 27, killing its driver.

DIGOS CITY — A bank security guard died on Saturday afternoon as the motorcycle he was driving bumped into a cargo truck in Bansalan town of Davao del Sur.

Citing the account of witnesses, a traffic investigation showed that Apas was trying to avoid a pedestrian who crossed the national highway in Barangay Mabuhay at around 4:40 p.m.

However, the motorcycle slipped and swerved to the opposite lane, slamming into the cargo truck.

The truck driver, Benjamin Pernia, Jr. told police he was unaware that his vehicle had hit Apas, hence he just continued driving.

But he stopped in an outpost in Barangay Sinawilan in Matanao town when he noticed a police vehicle from the 1104th Company of the Regional Mobile Force Battalion following the truck.

The police informed Pernia that he figured in a vehicular accident and put him under the custody of the Bansalan police office.