PHOENIX  — President Donald Trump’s national security adviser warned China on Wednesday that the United States is waking up to the threat that it believes the Chinese Communist Party poses “to our great way of life” and will act to check the spread of Beijing’s ideology. 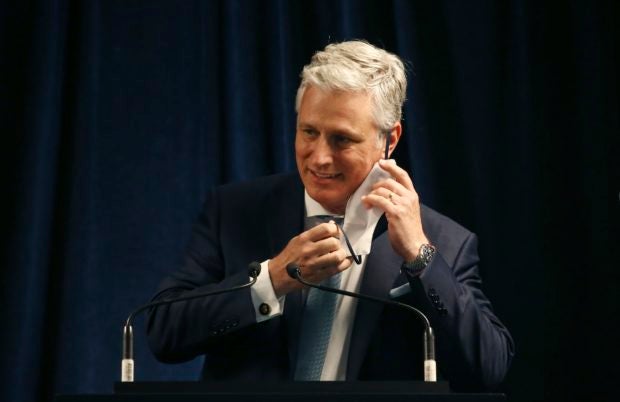 Robert O’Brien, assistant to the president for national security affairs, removes a face covering prior to speaking during a news conference regarding China Wednesday, June 24, 2020, in Phoenix. (AP Photo/Ross D. Franklin)

Robert O’Brien said his speech challenging China was the first of many in the coming weeks by senior administration officials, including Secretary of State Mike Pompeo, Attorney General William Barr and FBI Director Christopher Wray.

“The days of American passivity and naivety regarding the People’s Republic of China are over,” O’Brien told a group business leaders in Phoenix.

“America, under President Trump’s leadership, has finally awoken to the threat of the Chinese Communist Party’s actions and the threat they pose to our great way of life.”

This latest verbal offensive is an extension of Trump’s harsh words for Beijing’s handling of the coronavirus, which has killed more than 120,000 Americans. It follows on the heels of former national security John Bolton’s book that alleges Trump was soft on Chinese President Xi Jinping and other authoritarian leaders to advance his own political agenda.

According to Bolton, Trump asked Xi for China to buy more agricultural products to help the president win farm states and told the Chinese leader that he was right to build detention camps to house thousands of Chinese ethnic minorities.

That statement could make the president’s tough-on-China mantra a hard sell. The Trump campaign released an online video last month that included clips of former Vice President Joe Biden previously describing the Chinese as “not bad folks” and saying economic growth in China was in the U.S. interest.

O’Brien harsh words come as China has rebuffed U.S. efforts to negotiate a three-way nuclear weapons treaty with Russia and as the administration seeks Beijing’s help in getting North Korea to give up its nuclear weapons. The White House also is trying negotiate a new U.S.-China trade agreement.

The Trump adviser said the consensus for decades among American policymakers was as the U.S. invested more in China and trained more Chinese engineers, scientists, bureaucrats and others, the faster China would liberalize — first economically and then politically.

He said the U.S. welcomed China into the World Trade Organization in 2001 with concessions and trade privileges while playing down China’s human rights abuses and the theft of U.S. technology, which hurt American businesses.

“As China grew richer and stronger, we believed that the Chinese Communist Party would liberalize to meet the rising democratic aspirations of its people,” O’Brien said. “This was a bold, quintessentially American idea. It was born of our innate optimism and by the experience of our triumph over Soviet communism. Unfortunately, it also turned out to be very naive.”

O’Brien offered a list of Chinese activities that he said were aimed not only at repressing its own citizens, but influencing Americans. He said he was not attacking the Chinese people, but the Chinese Communist Party.

He said China has worked to eliminate “unfriendly” Chinese language media outlets worldwide and has turned to Twitter to spread anti-American disinformation.

In more than a dozen American cities, people listen to FM radio stations with “subtle pro-Beijing propaganda,” O’Brien said. Earlier this week, the administration designated the U.S. operations of four major Chinese media outlets as “foreign missions” — an action that could force some of their staff to leave the country.

He cited China’s cybersecurity activities that he said collect personal data on millions of Americans. He said the administration is working to prevent certain companies such as the tech giant Huawei that are closely tied to the Chinese Communist Party’s intelligence and security apparatus from accessing U.S. data.

Under Trump, the U.S. has imposed restrictions on U.S. semiconductor technology from going to Huawei and has limited the People’s Liberation Army’s ability to use student visa programs to place its officers in U.S. colleges and universities.