‘Coming back and biting us’: US sees virus resurgence

HOUSTON  — A coronavirus resurgence is wiping out two months of progress in the U.S. and sending infections to dire new levels across the South and West, with administrators and health experts warning Wednesday that politicians and a tired-of-being-cooped-up public are letting a disaster unfold. 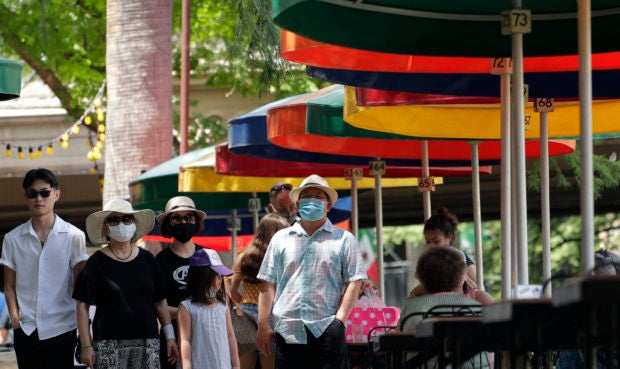 Visitors, some wearing masks to protect against the spread of COVID-19, walk along the River Walk in San Antonio, Wednesday, June 24, 2020, in San Antonio. Cases of COVID-19 have spiked in Texas and the governor of Texas is encouraging people to wear masks in public and stay home if possible. (AP Photo/Eric Gay)

The U.S. recorded a one-day total of 34,700 new COVID-19 cases, the highest level since late April, when the number peaked at 36,400, according to the count kept by Johns Hopkins University.

While newly confirmed infections have been declining steadily in early hot spots such as New York and New Jersey, several other states set single-day records this week, including Arizona, California, Mississippi, Nevada, Texas and Oklahoma. Some of them also broke hospitalization records, as did North Carolina and South Carolina.

“People got complacent,” said Dr. Marc Boom, CEO of the Houston Methodist hospital system. “And it’s coming back and biting us, quite frankly.”
Stocks slid on Wall Street as the news dampened hopes for a quick economic turnaround. The Dow Jones Industrial Average lost over 700 points for a drop of 2.7%. The broader S&P 500 fell 2.6%.

The virus has been blamed for over 120,000 U.S. deaths — the highest toll in the world — and more than 2.3 million confirmed infections nationwide. On Wednesday, the widely cited University of Washington computer model of the outbreak projected nearly 180,000 deaths by Oct. 1.

In Texas, which began lifting its shutdowns on May 1, hospitalizations have doubled and new cases have tripled in two weeks. Gov. Greg Abbott told KFDA-TV that the state is facing a “massive outbreak” and might need new local restrictions to preserve hospital space.

“When I look at a restaurant or a business where people … are not following the guidelines, where people are just throwing caution to the wind, it makes me angry.”

Only one intensive-care bed was available Wednesday in Montgomery, Alabama, and just 17 percent of ICU beds were open statewide, though hospitals can add more, said Dr. Don Williamson, head of the Alabama Hospital Association.

“There is nothing that I’m seeing that makes me think we are getting ahead of this,” the former state health officer said.

In Arizona, emergency rooms are seeing about 1,200 suspected COVID-19 patients a day, compared with around 500 a month ago. If the trends continue, hospitals will probably exceed capacity within the next several weeks, said Dr. Joseph Gerald, a University of Arizona public health policy professor.

“We are in deep trouble,” said Gerald, urging the state to impose new restrictions on businesses, which Gov. Doug Ducey has refused to do.

Dr. Peter Hotez, an infectious-disease expert at the Baylor College of Medicine in Texas, said he worries that states will squander what time they have to head off a much larger crisis.

“We’re still talking about subtlety, still arguing whether or not we should wear masks, and still not understanding that a vaccine is not going to rescue us,” he said.

The Texas governor initially barred local officials from fining or penalizing anyone for not wearing a mask as the state reopened. After cases began spiking, Abbott said last week that cities and counties could allow businesses to require masks. So did Arizona’s Ducey, who is a Republican like Abbott.

Some business owners are frustrated that officials didn’t do more, and sooner, to require masks.

“I can’t risk my staff, my clientele, myself, my family and everybody else in that chain just because other people are too inconvenienced to wear a piece of cloth on their face,” said Michael Neff, an owner of the Cottonmouth Club in Houston. He closed it this week so staffers could get tested after one had contact with an infected person.

In a sign of the shift in the outbreak, New York, Connecticut and New Jersey announced they will ask visitors from states with high coronavirus infection rates to quarantine themselves for 14 days. That’s a turnaround from March, when Florida issued such an order for visitors from the New York City area, where cases were soaring.

The U.S. Department of Justice took aim at Hawaii’s quarantine requirement for visitors, saying it discriminates against out-of-state residents. The Hawaii attorney general’s office says there’s no merit to the government’s arguments and a related lawsuit from out-of-state residents who own property in Hawaii.

Cases also are surging in some other parts of the world. India reported a record-breaking one-day increase of nearly 16,000 cases. Mexico and Iraq hit new highs as well.

But China appears to have tamed a new outbreak in Beijing, once again demonstrating its ability to quickly mobilize its vast resources by testing nearly 2.5 million people in 11 days. China on Wednesday reported 12 cases nationwide, down from 22 the day before.

Worldwide, more than 9.2 million people have been confirmed infected, and close to a half-million have died, by Johns Hopkins’ count.

Read Next
Virus cases surging among the young, endangering the elderly
EDITORS' PICK
House energy committee chair Arroyo bats for cheap electricity
Why Tagle is a leading papal contender
Powered by style, innovation and passion
In Borongan, nuns play hoops (not mahjong)
PH resumes talks with China on Chinese-funded transport projects
A laptop that maximizes your WiFi so you can maximize your productivity
MOST READ
Imee Marcos bares illegal importation of white onions
Why Tagle is a leading papal contender
Zubiri on SRA mess: Shameful, disgusting
Ogie Alcasid positive for COVID-19: ‘We keep ourselves protected and yet inabot din’
Don't miss out on the latest news and information.