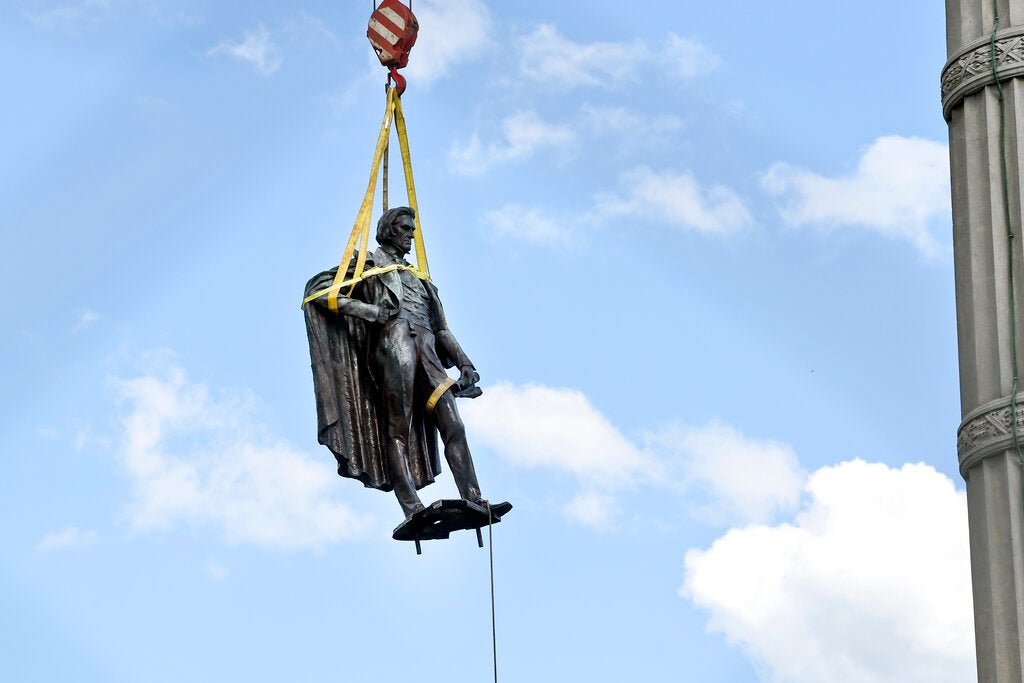 A statue of former U.S. vice president and slavery advocate John C. Calhoun is raised by crews after its removal from a 100-foot-tall monument on Wednesday, June 24, 2020, in Charleston, South Carolina. (AP)

CHARLESTON, South Carolina — The historic South Carolina city of Charleston removed a symbol of its legacy on Wednesday, after crews labored night and day to take away a statue honoring John C. Calhoun, an early U.S. vice president whose zealous defense of slavery led the nation toward civil war.

But the larger-than-life figure of Calhoun — known as “The Cast-Iron Man” in the early 1800s for his unbending support of Southern states’ rights — proved difficult to dislodge. After a nightlong struggle, contractors resorted to a diamond cutter to cut through a metal base securing his statue to a pedestal that towers more than 100 feet (30 meters) over a downtown square along Calhoun Street.

What had been expected to be a relatively quick task dragged on more than 16 hours before the statue was lowered down late Wednesday afternoon as dozens cheered.

Charleston Parks Director Jason Kronsberg told The Associated Press that “unforeseen conditions” were partly to blame for the delays, particularly a large bronze piece, deep inside the granite cylinder on which Calhoun stand. He said officials didn’t know it existed.

Crews, which began the dismantling process at midnight Tuesday, discovered the bronze when a concrete saw failed to cut through. Kronsberg said that a company – that had planned once the statue was down to use a diamond-tipped chainsaw to chop up the towering monument – instead spent hours hacking away at the cylinder.

Charleston’s council and mayor voted unanimously Tuesday to move it to “an appropriate site where it will be protected and preserved,” the latest in a wave of actions arising from protests against racial injustice in America.

“I believe that we are setting a new chapter, a more equitable chapter, in our city’s history,” said Mayor John Tecklenburg.

Dozens of residents spoke for and against the statue at Tuesday’s council meeting.

Grace Clark, a Charlestonian who said her family has lived in the city since the late 18th century, asked them “to please not remove our history. Not all history is good but it is our history.”

Clark offered an idea that city leaders had considered in the past: adding contextual information about Calhoun’s history with slavery, rather than taking down the monument.

Councilman Karl L. Brady Jr. said he would vote his conscience despite any political consequences, showing that in Charleston, “we place white supremacy and white supremacist thought back where it belongs — on the ash heap of history.”

The move comes days after the fifth anniversary of the slaying of nine Black parishioners in a racist attack at a downtown Charleston church. It also comes as cities nationwide debate the removal of monuments to Confederate leaders and others, and as thousands of Americans join street protests in the wake of George Floyd’s death under a Minneapolis police officer’s knee.

When Tecklenburg announced his plans a week earlier, dozens of protesters linked arms around the monument, shouting, “Take it down!” Some spray-painted the monument’s base, and police reported making several arrests for vandalism.

The Calhoun Monument stood since 1898 in downtown Charleston, towering over a sprawling square where locals and tourists alike enjoyed festivals. But several event organizers said recently that they would not use the space while the statue remained.

About 40% of enslaved Africans brought to North America came through the port of Charleston, which formally apologized in 2018 for its role in the slave trade. The city’s resolution says many see the statue “as something other than a memorial to the accomplishments of a South Carolina native, but rather a symbol glorifying slavery and as such, a painful reminder of the history of slavery in Charleston.”

Calhoun’s support of slavery, which he called a “positive good,” never wavered. He said in speeches on the U.S. Senate floor in the 1830s that slaves in the South were better off than free Blacks in the North. With his pro-slavery “Calhoun Doctrine,” he led the South toward secession before he died in 1850.

South Carolina’s Heritage Act protects historical monuments and building names, but the mayor said the monument is not on public property, nor does it commemorate one of the historical events listed in the act.

Thus far, Tecklenburg’s interpretation has not been legally disputed.

The Calhoun statue’s ultimate resting place will be decided by a special panel. The mayor has anticipated it would go to a local museum or educational institution.

As for the rest of the monument, Kronsberg said crews would rest Wednesday before returning at midnight to remove bronze plaques and decoration. They planned to begin to dismantle the tower itself on Thursday.