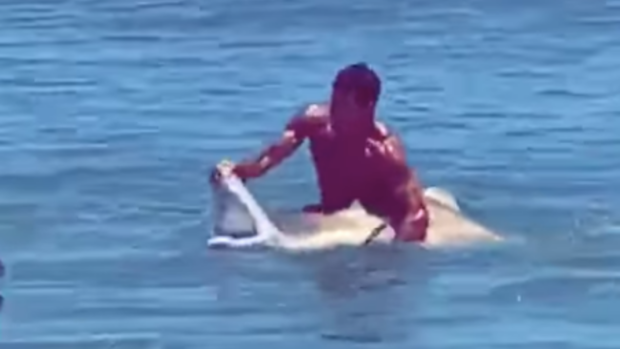 A swimmer used his bare hands to take out a fishing hook from a shark’s mouth at a beach in Delaware, United States.

Rachael Foster, one of the bystanders, recorded the incident and posted it on her Facebook page last Sunday, June 21. Foster was celebrating Father’s Day with her family when the incident happened.

According to Foster, after the man’s companion caught the shark, the man quickly swam towards it and grabbed it with his bare hands. He then used one arm to open the animal’s mouth while pinning it to his side. After the man safely took out the hook, he released the animal back into the water.

What a great way to spend Father’s Day!! We all had an amazing time ! Plus this guy caught this shark 3 cars down from us😳🦈EDIT: For anyone commenting how this guy should’ve left the shark alone, or that this isn’t right you really need to educate yourself. He did this by the book and was totally legal with it ! His buddy simply caught a shark he went out opened his mouth to get the hook out, than he went deeper into water turned the shark around and released it! Please please read up on the Delaware laws and the proper way to release a shark that’s been caught 😊

Following the incident, Foster told Fox-affiliate WNYW on June 22 that the swimmer was a trained shark handler. The animal was also identified as a sand tiger shark, classified as a prohibited species by Delaware’s Fish & Wildlife department.

Fishing for sharks is heavily restricted in the said state. The department also stressed that if one ends up with a catch that falls under the prohibited species classification, he/she must immediately release the animal “to ensure maximum probability of survival.” Ryan Arcadio/JB