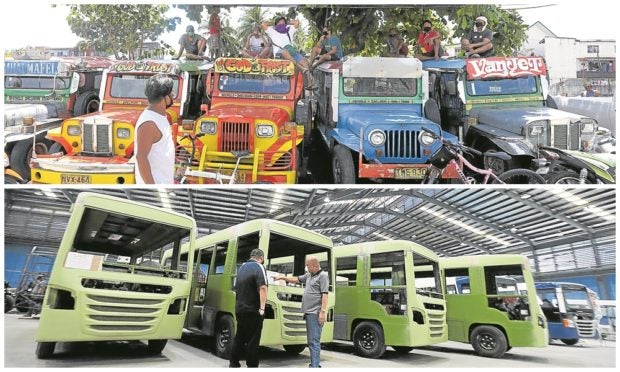 EVOLVING‘ KING OF THE ROAD’ Members of the Airmen’s Jeepney Operators and Drivers Association sit idly on the roofs of their vehicles waiting to be allowed back on the road in Pasay City. Presidential spokesperson Harry Roque said the fate of the jeepneys would depend on whether new mini buses, dubbed “modern jeepneys” (lower photo), shown here at the Caloocan City warehouse of one manufacturer, Del Monte Motor Works Inc., were adequate to handle the commuter demand. —MARIANNE BERMUDEZ/GRIG C.MONTEGRANDE

MANILA, Philippines — Transport group Piston has criticized the Department of Transportation (DOTr) for its continued “experimentation” with transportation reforms at the expense of its members, other drivers and even commuters.

“While the government continues to sideline traditional jeepneys, it also continues to ignore [their] crucial role as established in previous studies and surveys that show jeepneys alone service 9 million trips in Manila,” the group said in a statement on Tuesday.

“It also turns a blind eye [to] the fact that jeepneys are the connecting trips to tricycles, fellow jeepneys, to buses and even to the railway systems,” Piston stressed, adding that “because of this [experimentation], [the lives of] our commuters and drivers are on the line.”

While modern jeepneys with Euro-4 engines have been allowed to go back on the road after being stuck in garages during the nearly three-month Metron Manila lockdown, their conventional counterparts have yet to resume operations. Government officials insist that it is impossible to maintain physical distancing in old jeepneys because passengers have to sit facing each other — something also done in modern jeepneys. 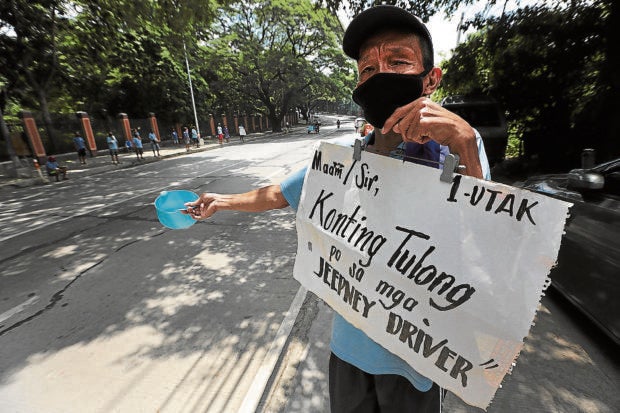 DEEPER INTO POVERTY Samuel Narag, a 56-year-old driver of a conventional jeepney, begs for alms on C.P. Garcia Avenue in Diliman, Quezon City. Only modern jeepneys have been allowed to resume operations, leaving Narag without a source of income for the past months. —GRIG C. MONTEGRANDE

Piston also slammed the DOTr’s “flawed logic” in giving priority to closed, air-conditioned modern jeepneys even though studies showed that open-air, well-ventilated systems, like the one in old jeepneys, reduce the risk of coronavirus transmission.

The Palace has said that conventional jeepneys would be allowed to operate should their new counterparts fail to meet public demand.

The ongoing ban continues to push one of the poorest sectors in the country deeper into poverty, according to independent think tank Ibon Foundation. Based on its estimates, jeepney drivers have lost as much as P78,000 since March when Metro Manila and other parts of the country were placed on lockdown to stop the spread of the coronavirus.

“Their troubles risk becoming permanent with the government exploiting the pandemic to keep small drivers and operators off the road to fast-track its jeepney phaseout program,” Ibon said in a statement.

Its estimates were based on the average income of jeepney drivers plying the MCU-Rotonda via Taft Avenue, a 7-kilometer route. Its drivers usually earned an average of P1,000 a day after a 12-hour shift, minus the boundary and fuel expenses.