SEOUL, South Korea — North Korea said Wednesday it will redeploy troops to now-shuttered inter-Korean tourism and economic sites near the border with South Korea and take other steps to nullify landmark 2018 tension-reduction deals.

The steps came a day after North Korea blew up an inter-Korean liaison office just north of the Korean border in a carefully choreographed, largely symbolic display of anger that puts pressure on Washington and Seoul amid deadlocked nuclear diplomacy. The demolition was the most provocative act by North Korea since it entered nuclear talks in 2018, though the building was empty and the North had previously signaled plans to destroy it.

The North’s General Staff said units of the regiment level and necessary firepower sub-units will be deployed at the sites of the Diamond tourism project and the Kaesong industrial complex, both located just north of the heavily-fortified border. Those sites, once symbols of inter-Korean cooperation, have been shuttered for years amid animosities over North Korea’s nuclear program.

The North said it will also resume military exercises and re-establish guard posts in border areas and open front-line sites for flying propaganda balloons toward South Korea. These steps mean that North Korea will nullify a 2018 deal with South Korea aimed at lowering military tensions at border areas.

Under those agreements, the two Koreas halted live-firing exercises, removed some land mines and destroyed guard posts inside their border, the world’s most heavily fortified. Some outside experts said such steps have undermined South Korea’s national security more as the North’s nuclear weapons arsenal remains intact. 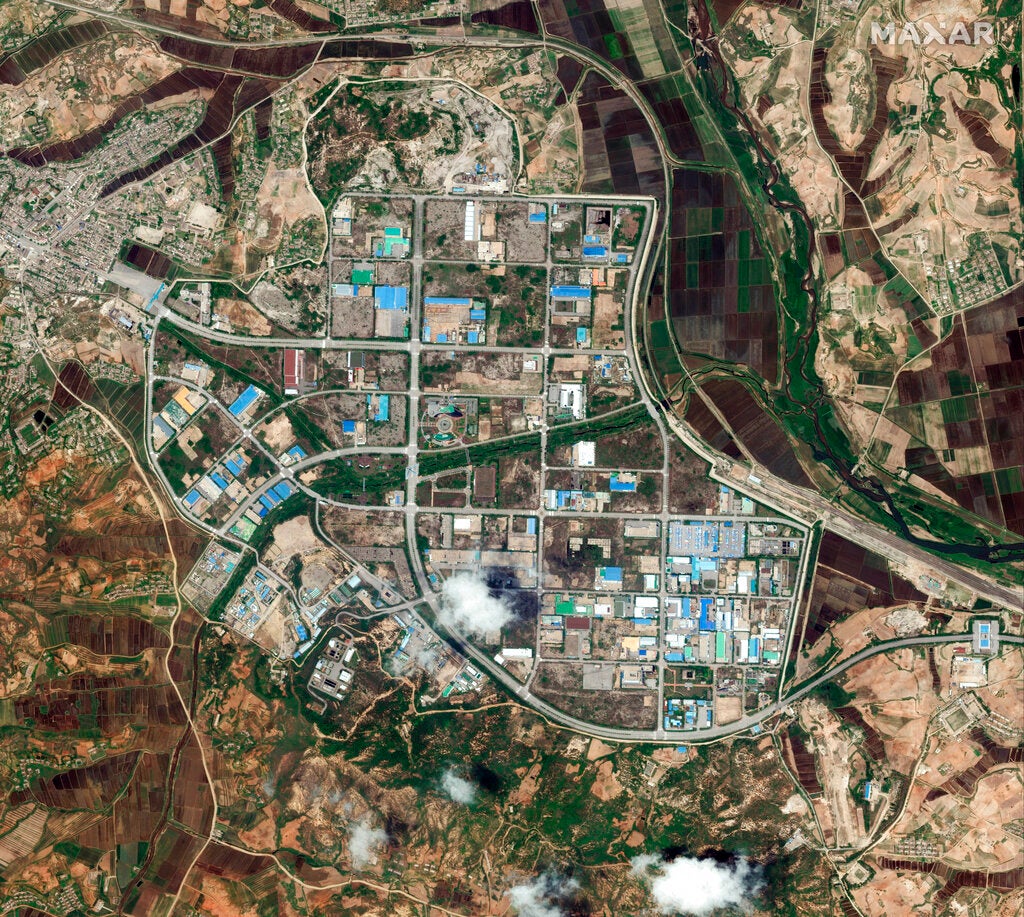 This May 29, 2020, photo provided by Maxar Technologies shows an overview of a shuttered joint industrial park, where an inter-Korean liaison office building is located in Kaesong, North Korea. (Maxar Technologies via AP)

The North’s official Korean Central News Agency on Wednesday repeated its hard-line stance against South Korea has been taken to retaliate South Korea’s failure to prevent activists from floating propaganda leaflets across the border.

The building destruction was a “reflection of the zeal of our enraged people to punish human scum who challenged the noblest dignity and prestige of our country and those who sheltered the scum, perpetrators of shuddering crime.” 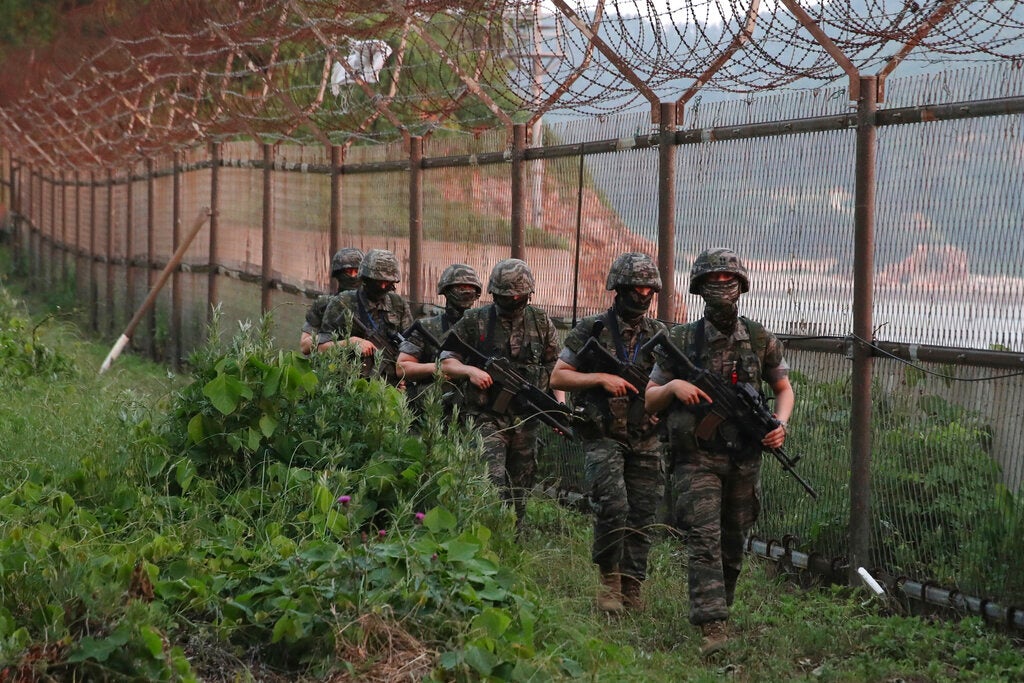 It said the destruction is the first step of the North’s retaliatory action against South Korea and the North will set the intensity and timing for its additional steps while closely monitoring South Korean moves. “Under such an acute situation as now, shameless and reckless attitude and response of the South Korean authorities will lead to our tougher retaliation plans,” it said.

She said Moon had offered to dispatch his National Security Director Chung Eui-yong and spy chief Suh Hun at the earliest possible date that North Korea would want. Kim Yo Jong, has spearheaded the North’s recent fiery rhetoric against South Korea, called Moon’s offer “unrealistic” and “nonsensical” and said South Korea must pay the price for its failure to stop activists from sending anti-Pyongyang leaflets toward North Korea.

On Tuesday, the North destroyed with explosives the liaison office building the border town of Kaesong, the first such inter-Korean office which the two Koreas opened in 2018 when their ties flourished.

South Korea issued a statement expressing “strong regret” over the destruction of the building, warning of a stern response if North Korea takes additional steps that aggravate tensions.

It was a serious setback to the efforts of Moon to engage the North. Moon, a liberal who champions greater reconciliation with North Korea, shuttled between Pyongyang and Washington to help set up the first summit between Kim Jong Un and President Donald Trump in June 2018.

Inter-Korean relations have been strained since the breakdown of a second summit between Kim and Trump in Vietnam in early 2019. The summit fell apart because of disputes over how much sanctions relief the North should get in return for Kim’s dismantling of his main nuclear complex, which was seen as a limited denuclearization measure. 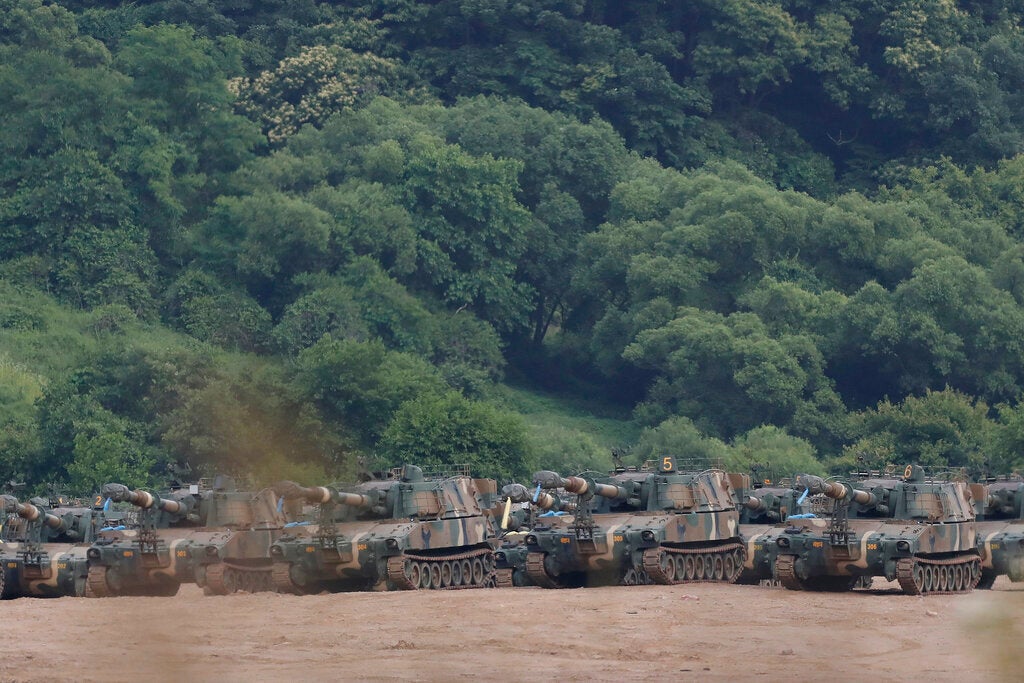