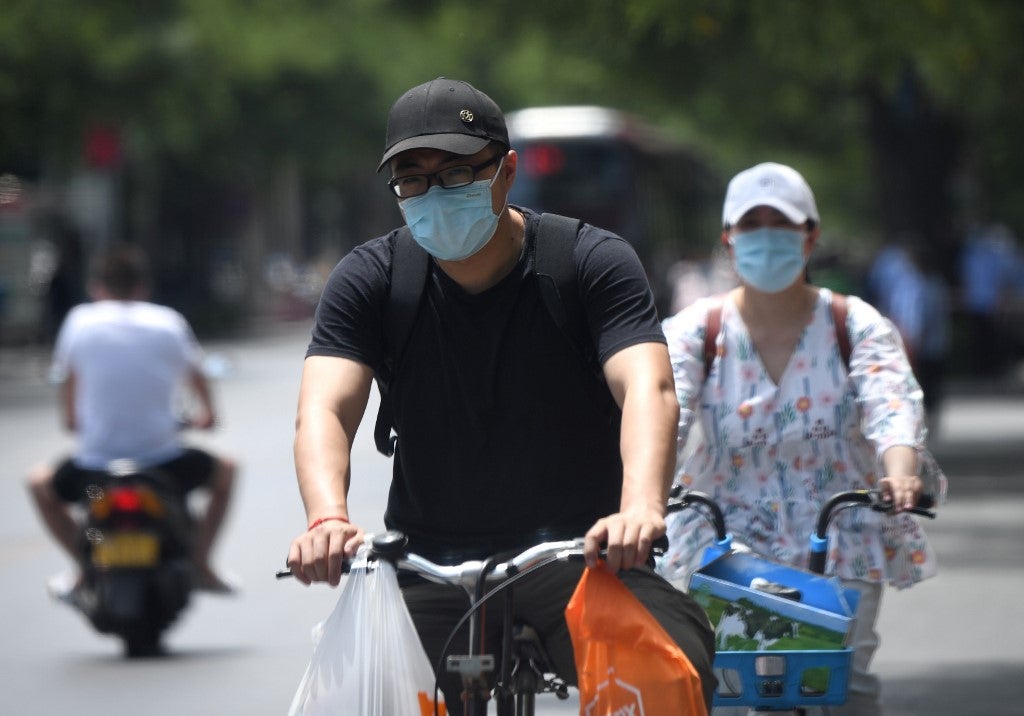 People wearing face masks ride their bike on a street along a residential area under lockdown near Yuquan East Market in Beijing on June 15, 2020. – China locks down ten more Beijing neighbourhoods over virus cluster. (Photo by Noel Celis / AFP)

BEIJING — China’s capital city raced Monday to control a fresh coronavirus outbreak, with 75 cases linked to a single wholesale food market in Beijing where authorities have locked down neighbourhoods and launched a massive test and trace programme.

The outbreak in China — where the disease first emerged last year — had largely been brought under control until a fresh batch of cases was detected in the capital last week.

Health officials reported 49 new coronavirus cases nationwide on Monday, including 36 more in Beijing where a cluster linked to the Xinfadi market has fuelled fears of a second wave of infections.

City official Li Junjie said at a press conference that cases had also been found at the Yuquandong wholesale market in the capital’s northwestern Haidian district.

As a result, that market had been closed and nearby schools would be shut, while people living in 10 housing estates around it would be forbidden from leaving their homes, he said.

It was not immediately clear how many households were under the new lockdowns, but the orders will affect thousands of people.

The capital has begun mass testing workers from the Xinfadi food market, as well as those who live nearby and anyone who visited it in recent weeks.

AFP reporters saw dozens of people queuing up to be tested at one local stadium on Monday morning, which was heavily guarded by people in hazmat suits.

Officials have said they plan to carry out virus tests on 46,000 residents in the area. More than 10,000 people have been tested already.

Several cities have warned residents not to travel to Beijing.

Authorities are also stepping up efforts to trace people who have visited the Xinfadi market, with companies and neighbourhood communities messaging staff and residents to ask about their recent movements.

At least one building management company asked tenants to declare if any of their staff had visited the market or been in contact with those who had.

The outbreak also turned the spotlight on the safety of Beijing’s food chain.

A 19-year-old student surnamed Shao told AFP she just started school in the capital a few days ago, but plans to return to her hometown because she’s worried about the virus.

“I just came to Beijing for a few days. Now I’m going to go home again,” she said.

There were also 10 imported cases reported on Monday, the likes of which have accounted for the majority of China’s cases in recent months as overseas nationals return home.

In total 177 people are now ill with the disease in China — two severely — which is the highest since early May.