Protests against terror bill held in the provinces

Activists in Baguio, Cebu, Negros out on the streets despite police presence
By the Inquirer Bureaus / 05:04 AM June 13, 2020 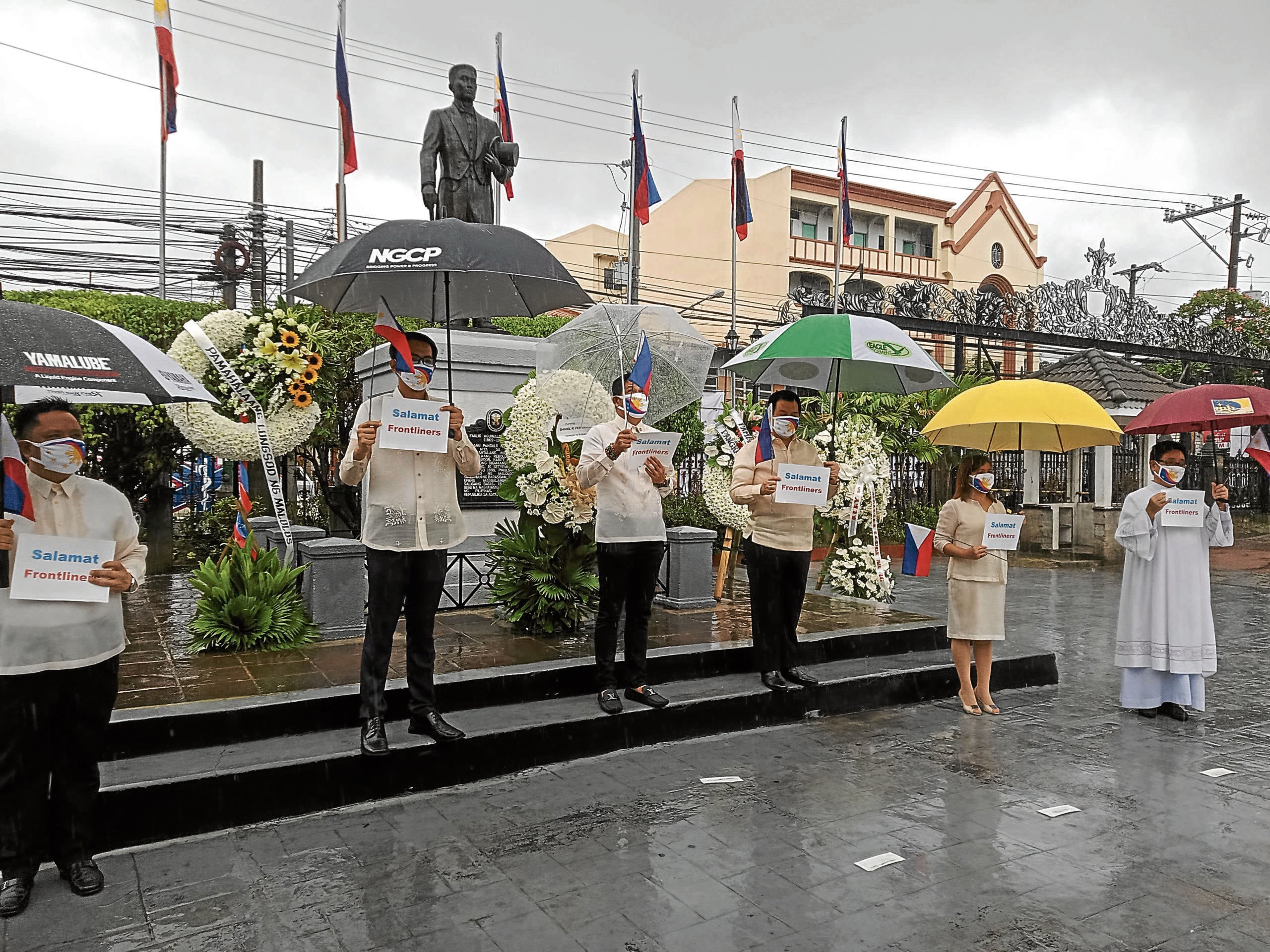 SIMPLE RITES Wearing face masks printed with the Philippine flag, Bulacan officials lead the simple commemoration of the 122nd Philippine Independence Day at the historic Barasoain Church in the City of Malolos on Friday. The occasion was marked with a wreath-laying ceremony on the monument of Gen. Emilio Aguinaldo, the first Philippine President, outside the church. —CARMELA REYES-ESTROPE

BAGUIO CITY—From Baguio City to the streets of Cebu in the Visayas, about 200 activists went out on the streets to oppose the antiterrorism bill amid police presence, as the country marked its 122nd Independence Day on Friday.

In Baguio, over a hundred protesters, including students and indigenous peoples, staged a “mañanita” rally in front of the University of the Philippines (UP). They brought party props, such as cakes and colorful hats, to take a jab at the mañanita, or birthday celebration, of Police Maj. Gen. Debold Sinas, director of the National Capital Region Police Office, in May. Sinas’ mañanita was attended by dozens of police officers, which violated the ban on mass gatherings during a community quarantine imposed due to the new coronavirus disease (COVID-19) pandemic.

“Defending our ancestral lands and environment from destruction has been our practice. But with the looming terror law, this defense is bound to be considered an act of terrorism and the protesting indigenous peoples are declared terrorists,” the Cordillera Peoples Alliance said in a statement.

During the assembly at 10 a.m., a police mobile patrol pulled over near the protesters with the policemen asking them to observe health protocols, such as physical distancing. They peacefully disassembled after about 30 minutes.

In Angeles City, members of the Sigma Kappa Pi fraternity in Pampanga unveiled their placards online against the antiterrorism bill. It said the bill is “not a deterrent against terrorism but it is intended to cover up the government’s criminal negligence against the COVID-19 pandemic and to silence legitimate dissent and opposition.”

In Legazpi City, youth and transport groups slammed what they called “fake independence” in a protest at the city’s Peñaranda Park demanding for the junking of the antiterrorism bill.

In Kawit, Cavite province, the traditional flag-raising at the balcony and the wreath-laying at the tomb of Gen. Emilio Aguinaldo on Friday morning pushed through, although closed to the public to prevent mass gathering.

There were also no trade and jobs fairs or public celebrations that followed the morning ceremonies at the Aguinaldo Shrine.

In the past, Kawit hosted top government officials, among them presidents, in commemorating the Philippines’ declaration of independence from Spain on June 12, 1898.

“We may [have] had a simple celebration this morning, it has never been any less significant than in previous years,” said Kawit Mayor Angelo Aguinaldo.

Aguinaldo, in his message, recognized the front-liners in the fight against the coronavirus, likening their efforts to those of Filipino revolutionaries.

A bigger crowd of about 200 from rights group Karapatan and farmers’ organization, Kasama, held another protest action in Dasmariñas City in Cavite province, Bayan said.

In Bulacan province, the Independence Day commemoration at the historic Barasoain Church in the City of Malolos was also simple.

Without the usual large crowd, lengthy speeches and marching bands, town and provincial officials marked the occasion with a simple program, including a wreath-laying ceremony at the monument of the first Philippine President, Gen. Emilio Aguinaldo, outside the church.

The church was the venue of the Malolos Congress, which drafted the constitution of the First Philippine Republic in 1898.

In Angeles City, the reenactment of the first anniversary of the proclamation of Philippine Independence was limited to wreath-laying and flag-raising at the Holy Rosary Church-Pamintuan Mansion complex.

The National Historical Commission of the Philippines in 2017 recognized the Holy Rosary Church as the site of the first anniversary celebration of Philippine independence.

In Cebu City, seven activists demanding for the junking of the antiterrorism bill, wearing face masks and standing 2 meters apart, held a “lightning rally” for less than a minute on a vacant space on Gorordo Avenue.

Regletto Imbong, president of All UP Academic Employees Union, said they only wanted a lightning rally so as not to give the police a reason to arrest them.

He said they were going to hold the rally in front of UP Cebu in Barangay Lahug but they decided to stay away because policemen in full battle gear were deployed just outside the campus as early as 6 a.m.

On June 5, seven protesters and a 19-year-old bystander were arrested by policemen while holding a rally against the antiterrorism bill in front of the UP Cebu entrance gate.

At least nine supporters of President Duterte also staged a rally in downtown Cebu City in support of the antiterrorism bill but no policemen guarded them.

“The double standard is clear here. If the supporters of the antiterrorism bill can freely hold a rally without threat or fear of violent dispersal or arrest, then the dissenters should also be extended the same courtesy,” said Bayan-Central Visayas spokesperson Jaime Paglinawan, who was among those arrested in last week’s UP Cebu rally.

Similar protests were also held in Dumaguete City, Negros Oriental province, where some ten protesters held a mañanita in front of Silliman University; and in Bacolod City in Negros Occidental province, involving some 50 members of Bayan-Negros who marched from the San Sebastian Cathedral to the downtown area of the city, and another 15 persons from an urban poor group who held a lightning rally at the Bacolod City Public Plaza. —REPORTS FROM KIMBERLIE QUITASOL, EV ESPIRITU, TONETTE OREJAS, CARMELA REYES-ESTROPE, REY ANTHONY OSTRIA, MARICAR CINCO, MAR S. ARGUELLES, NESTLE SEMILLA, RAFFY CABRISTANTE AND CARLA GOMEZ