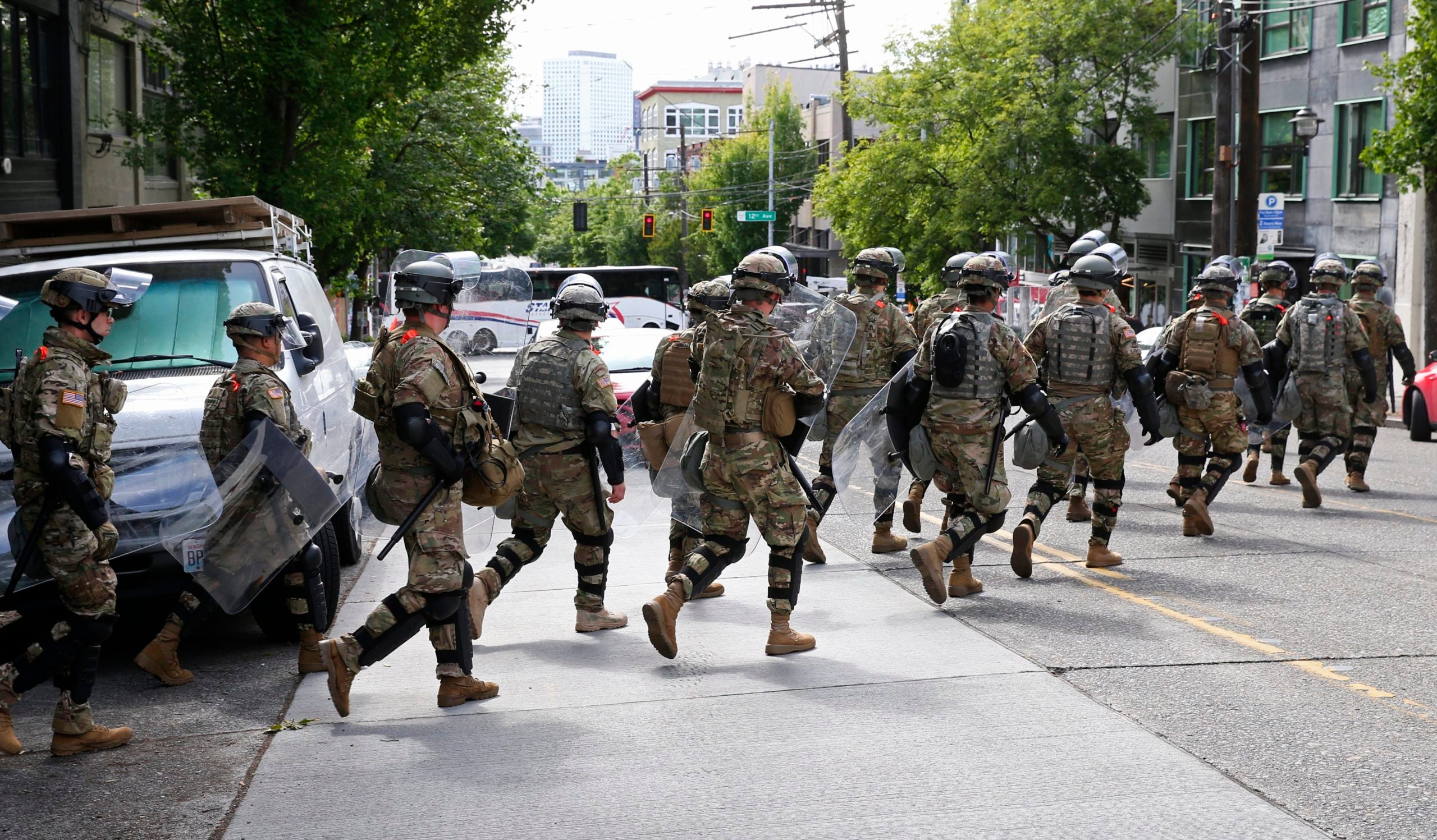 National Guard troops cross East Pike en route to the East precinct of the Seattle Police Department, Monday, June 8, 2020, in Seattle’s Capitol Hill neighborhood. Protests continued Monday across the United States over the death of George Floyd who died after being restrained by Minneapolis police officers on May 25. (Ken Lambert/The Seattle Times via AP)

U.S. District Judge Richard Jones issued the two-week order after a Black Lives Matter group sued the Seattle Police Department this week to halt the violent tactics it has used to break up largely peaceful protests in recent days.

Officers used tear gas, pepper spray and other force against crowds that have demonstrated following the George Floyd’s death at the hands of Minneapolis police.

Seattle Mayor Jenny Durkan and Police Chief Carmen Best have apologized to peaceful protesters who were subjected to chemical weapons.

But Best has said some demonstrators violently targeted police, throwing projectiles and ignoring orders to disperse.

Hundreds are gathering and marching in the rain and some businesses have temporarily closed in response to Black Lives Matter Seattle-King County’s call for a statewide general strike on Friday.

The organization encouraged supporters not go to work or to work from home on Friday, and to take time to learn about local elected officials and local issues.

A March of Silence was underway Friday afternoon meant to “honor those lost to police brutality and institutionalized racism,” with the silent part also to help slow the spread of the coronavirus.

The event in Seattle started at 1 p.m. at Judkins Park with announcements about masks being available and the band Public Enemy blaring on speakers, The Seattle Times reported. Speakers talked about demands including defunding police and ending cash bail.

This week, people opposing police brutality and racial injustice after the police killing of George Floyd in Minneapolis have turned part of Seattle’s Capitol Hill neighborhood into a protest center with speakers, drum circles and Black Lives Matter painted on a street near a police station. Police largely left the station after nights of face-offs where police tear-gassed protesters and some protesters threw objects at them.

Seattle Mayor Jenny Durkan tweeted that she visited that area Friday to speak with organizers and community about moving forward, saying for as long as she can remember Capitol Hill has been autonomous and a place people can go to express themselves freely.

The Black Lives Matter event is happening southeast of Capitol Hill in the in the Central District neighborhood.