US gears for weekend protests amid anger at new police abuses 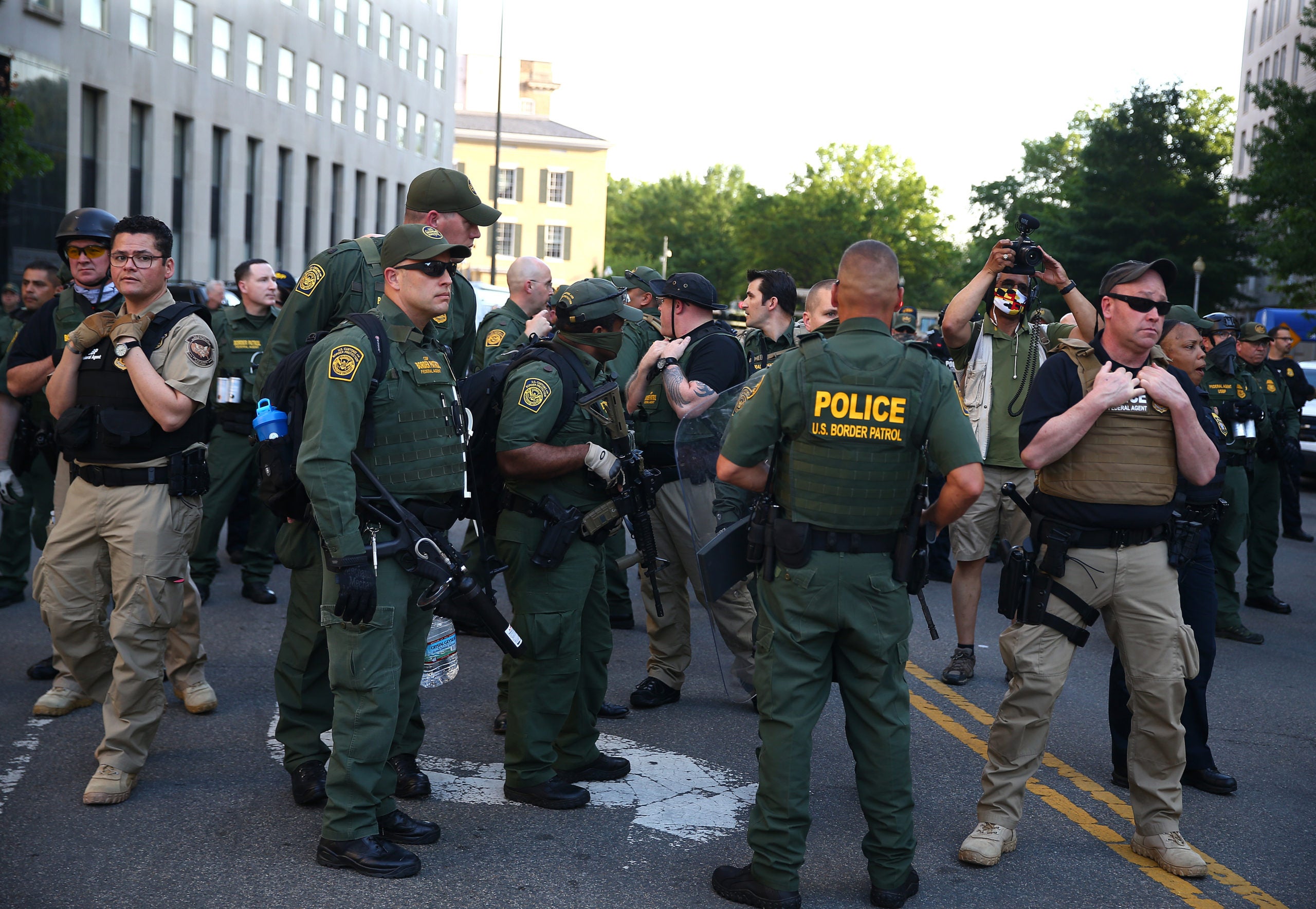 WASHINGTON, DC – JUNE 03: Armed members of the U.S. Border Patrol gather as peaceful protests continue citywide against police brutality and the death of George Floyd, on June 3, 2020, in Washington, DC. Protests in cities throughout the country have been held after the death of George Floyd, a black man who was killed in police custody in Minneapolis on May 25. Tasos Katopodis/Getty Images/AFP

NEW YORK — The United States braced Friday for massive weekend protests against racism and police brutality, as outrage soared over the latest law enforcement abuses against demonstrators that were caught on camera.

With protests over last week’s police killing of George Floyd, an unarmed black man, surging into a second weekend, President Donald Trump sparked fresh controversy by saying it was a “great day” for Floyd.

Massive street demonstrations are set for Saturday, including in Washington where tens of thousands of people are expected. The mayor painted “Black Lives Matter” in giant letters on the road leading to the White House ahead of the crowd’s arrival.

Also on Saturday a remembrance for Floyd will be held in Raeford, North Carolina, the state where he was born, following an initial ceremony in Minneapolis that was held Thursday.

The protests, sparked by a police officer kneeling on Floyd’s neck for almost nine minutes as he pleaded for his life, took place amid a roiling controversy over officers’ use of force against largely peaceful demonstrators.

In Buffalo, New York, two policemen were suspended without pay after a video showed them shoving over a 75-year-old protester who fell and suffered a head injury.

Reporting the suspension on Twitter, Mayor Byron Brown said he and the police commissioner were “deeply disturbed” by the video.

An earlier police statement said the man, who appeared unconscious and bleeding heavily from the head, “tripped and fell.”

In Indianapolis, police launched an investigation after a video emerged showing at least four officers hitting a woman with batons and firing pepper balls at her on Sunday night.

And in New York City Thursday, officers baton-charged dozens of peaceful protesters defying a curfew in the Bronx after pinning them in, leaving them with nowhere to run, several reports said.

New York Police Commissioner Dermot Shea announced Friday that two officers had been suspended following “several troubling incidents,” one for pushing a woman to the ground and another for pulling down an man’s face mask and spraying pepper spray at him. Both incidents were caught on video.

In an editorial published Friday, The New York Times called on him to “open your eyes.

“The police are out of control,” it said.

Floyd, 46, died in the Midwestern city of Minneapolis while handcuffed during a May 25 arrest for a non-violent offense.

His death reignited longstanding resentment over police killings of African Americans and unleashed a nationwide wave of protest unlike anything seen in the US since Martin Luther King’s 1968 assassination.

The action has handed Trump one of the greatest challenges of his tumultuous presidency.

While condemning Floyd’s death, he has adopted a tough stance towards the protesters and has been accused of exacerbating tensions.

US civil rights groups have filed a case suing Trump after security forces fired pepper balls and smoke bombs to clear peaceful demonstrators in Washington before the president walked to a church for a photo op earlier this week.

Mayor Muriel Bowser Friday renamed the area outside the White House “Black Lives Matter Plaza” — unveiling a giant street mural — after tweeting a letter calling on Trump to “withdraw all extraordinary federal law enforcement and military presence from our city.”

But Trump was back in buoyant mood following the release of strong job numbers Friday.

He told reporters that such violence as Floyd’s death in handcuffs cannot be allowed to happen.

Nevertheless, Trump added, “Hopefully George is looking down right now and saying this is a great thing for our country.”

“George Floyd’s last words, ‘I can’t breathe,’ have echoed across our nation and around the world.

“For the President to try to put any other words in his mouth is frankly despicable,” he tweeted.

Some of the early protests were marred by rioting and looting but they have been mostly peaceful since then.

Curfews have been lifted in Washington, Los Angeles, and other cities but New York’s is due to run for the next three nights.

Several thousand marched in Brooklyn on Friday afternoon as activists sought to keep up the movement’s momentum into the weekend.