Malaysian ex-PM to learn fate in 1MDB trial next month

KUALA LUMPUR — Malaysia’s ex-leader Najib Razak will learn his fate over allegations he plundered state coffers next month when a verdict is delivered in his first trial over the multi-billion-dollar 1MDB scandal. 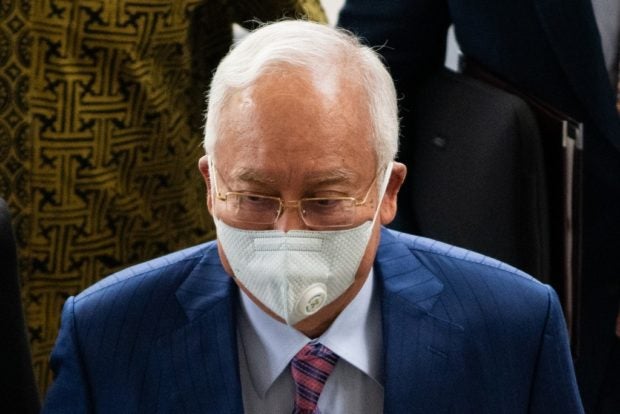 Malaysia’s former prime minister Najib Razak wears a face mask as he arrives for his corruption trial at the High Court in Kuala Lumpur on May 19, 2020. – Razak’s corruption trial resumed May 19 after being halted in March due to the spread of the COVID-19 coronavirus. The former prime minister and associates are accused of looting billions of dollars from sovereign wealth fund 1MDB and using it to finance a global spending spree. Photo by Mohd RASFAN / AFP

Huge sums were looted from the country’s sovereign wealth fund and spent on items ranging from high-end real estate to artwork, in a globe-spanning fraud allegedly involving Najib and his inner circle.

The former prime minister lost power in 2018 elections, in large part due to accusations of his involvement, and he is fronting several trials over the controversy. He denies all wrongdoing.

The Kuala Lumpur High Court this week heard closing arguments in the first trial, which began 14 months ago and centres on the transfer of 42 million ringgit ($9.8 million) to Najib’s bank accounts.

The presiding judge said Friday he would hand down a verdict on July 28.

Najib will face a lengthy jail term and will likely be sentenced on the same day if found guilty.

His lawyers argue the 66-year-old was ignorant of the transactions into his accounts from SRC International, a former unit of 1MDB.

They have pointed the finger at Low Taek Jho, a jet-setting Malaysian financier known as “Jho Low”, as the true mastermind behind the fraud, saying he tricked the former premier.

Lawyer Muhammad Shafee Adbullah urged the judge to clear Najib of the seven charges of corruption and money-laundering he is facing, saying the bank transfers were “illegal”.

“The transactions were never authorized” by Najib, he said, adding that “rogue bankers” were also involved in the fraud.

Low, who held no official positions at 1MDB but was believed to wield huge influence over the investment vehicle, has been charged in Malaysia and the US over the scandal.

The financier, whose current whereabouts are unknown, maintains his innocence.

Prosecutors claim that Najib had full control over SRC International and took major decisions related to it.

The case is one of three 1MDB-linked trials so far underway involving the former premier.