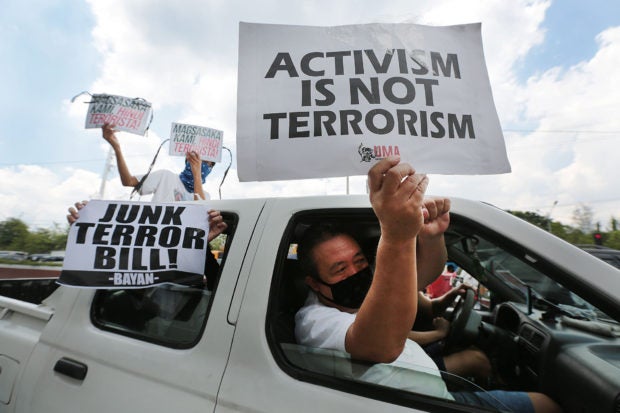 DRIVE-BY PROTEST | Honking horns, holding up placards and ringing bells, protesters from the militant group Bayan and allied organizations stop by the gate of the House of Representatives on Wednesday to assail the proposed Anti-Terrorism Act of 2020. House members later voted 173-31 (with 29 abstentions) to pass the bill on third and final reading, adopting the Senate version that was approved in February. (Photo by GRIG C. MONTEGRANDE / Philippine Daily Inquirer)

MANILA, Philippines — The House of Representatives on Wednesday passed the Anti-Terrorism Act of 2020 by a vote of 173-31, with 29 abstentions. The approved version was a virtual copy of Senate Bill No. 1083, which the upper chamber passed in February.

The House leadership had refused during the bill’s second reading on Tuesday proposed amendments meant to address its “unconstitutional provisions.”

“We have to regretfully decline any proposal for amendments at this time,” said one of the bill’s sponsors, Puwersa ng Bayaning Atleta Rep. Jericho Nograles, who said he was instructed by the chair of the House public order committee Masbate Rep. Narciso Bravo Jr., “to pass the bill without amendments.”

House human rights panel chair and Quezon City Rep. Jesus Suntay cited several provisions that he said were “in violation of the Bill of Rights,” including Section 29 that allows warrantless arrests, and another provision that extends the number of days a suspect can be detained without a warrant from three days to 14 days, extendable by another 10 days.

The bill amends and repeals the Human Security Act, and seeks to impose tougher penalties, including life imprisonment, on anyone who will participate in, conspire with, or incite others in the planning or facilitation of a terrorist attack.

Vice President Leni Robredo on Wednesday questioned the intent and timing of the bill, saying that some of its provisions may be used to further crack down on dissent and free speech.

The measure, certified urgent by President Rodrigo Duterte, does not address the more pressing needs of the country amid the COVID-19 pandemic, she said.

The Vice President noted that several provisions in the bill focus on expanding the definition of a terrorist and on lessening the checks and balances against wrongful arrest, provisions that “cause a lot of fear,” Robredo said.

“Especially in the hands of people who have no qualms about using disinformation, inventing evidence, or finding the smallest of pretexts to silence its critics—this power is very dangerous,” she added.

Commission on Human Rights spokesperson Jacqueline de Guia warned that the prolonged detention of suspects without a judicial warrant, “may result [in] cruel, inhuman, and degrading treatment or torture.”

National Union of Peoples’ Lawyers president Edre Olalia, who said his group would challenge the bill’s “constitutionality” before the high court should it pass into law, said the “draconian” measure stripped Filipinos of their freedom of speech and association.

The Asean Parliamentarians for Human Rights meanwhile described the bill as “extremely concerning,” as it could be weaponized by the administration.

Senate President Vicente Sotto III, however, assured government critics that the antiterror bill “has more than enough safeguards” against abuses.

In Malacañang, presidential spokesperson Harry Roque described as “unfounded fear” the concerns that critics of the administration would be Red-tagged and that police would abuse its power to arrest individuals supporting civil organizations.

Defense Secretary Delfin Lorenzana meanwhile maintained that the measure was needed now “because the threat that terrorists [would] take advantage of the pandemic is very great.”