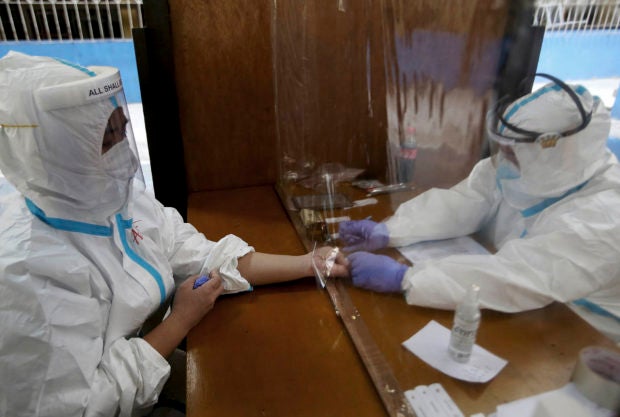 TESTING A VIRUS FIGHTER | A front-line hospital worker gets herself tested for the new coronavirus at Tondo High School in this photo taken on May 3. More than 2,600 health workers have caught the virus in the line of duty and 32 of them have died. (Photo by RICHARD A. REYES / Philippine Daily Inquirer)

MANILA, Philippines — Senate President Vicente Sotto III and his colleagues minced no words as they took Health Secretary Francisco Duque III to task on Wednesday for the failure of the Department of Health (DOH) to distribute at least P32 million in compensation to the families of front-line health workers who died treating COVID-19 patients.

“This is definitely unacceptable,” Sotto told reporters in an online press briefing.

The senators pointed out that the Bayanihan to Heal as One Act, or Republic Act No. 11469, explicitly mandated the government to give P1 million each to the families of nurses and doctors who lost their lives attending to people afflicted with the severe respiratory disease caused by the new coronavirus.

The law also requires the government to give P100,000 to health workers who would contract the coronavirus in the line of duty but survive.

On Tuesday, the senators were dismayed to learn that the DOH had not carried out the compensation provisions of the law because of the absence of implementation rules.

“It’s really criminal, this neglect to pass this and to delay these types of benefits. We keep praising [medical front-liners] as our heroes and yet it’s mere lip service if we don’t give them [compensation],” Sen. Sonny Angara said.

As of Monday, 2,669 health workers had contracted the coronavirus. Gordon said on Tuesday that 32 had died and two were severely ill.

Sen. Panfilo Lacson said the absence of implementation rules should not be a hindrance to the payment of compensation to the health workers or their families.

“It’s in the law. The lack or absence of [implementation rules] should not be an excuse not to comply with the law,” Lacson said.

Gordon agreed that the implementation rules were not needed as the law is clear.

“Why should we distinguish? They have already died. A little investigation will tell us that you can pay them because they died [on] the front line. That’s a no-brainer,” he said.

Earlier, the Senate passed a resolution demanding Duque quit his post due to lack of foresight, negligence and failure of leadership as chair of the Inter-Agency Task Force on Emerging Infectious Diseases, the temporary government body overseeing the Duterte administration’s response to the coronavirus outbreak.

On Wednesday, Sotto said Duque should not use the absence of implementation rules to justify his inaction on the payment of benefits to the ailing health workers and the families of those who had died.

Sotto reminded Duque in a letter that the government had already set aside funds to compensate medical workers and that the law had been in effect since March 25.

“The efforts and sacrifices made by our health-care [workers] need not be more emphasized. Their being so-called COVID-19 heroes and the accolades they received each day are enough reminders for them to get noticed, including you. But it seems that you pay no heed to these facts,” Sotto told Duque.

“It is very disconcerting to know that after more than two months [after] the law’s implementation, no health worker and his or her family has received their supposed remuneration for sacrificing their own lives for our own,” he added.

Sen. Christopher “Bong” Go, chair of the Senate health committee, echoed the sentiments of his colleagues as he urged the government to “remedy this immediately and release the rightful compensation for our health workers.”

“Our health workers are doing one of the most difficult and dangerous jobs against an unseen enemy—a sickness that until now has no cure,” Go said in a Viber message to the Inquirer.

“They have paid the ultimate price — their lives — so that the rest of their countrymen and women will continue to live,” he said.

“Let me say this: Seriously neglecting to do your job for the people who paid with their own lives is a dishonor to their memory and sacrifices for our country,” he added.

Lacson noted that the compensation package for the medical front-liners took effect retroactively on Feb. 1 and that it covered all health-care personnel in public and private hospitals.

“This makes us wonder: How can we ‘heal as one’ when health authorities cannot even heal their own?” Lacson said.

In a separate letter to Duque, Senate Majority Leader Juan Miguel Zubiri and Senators Joel Villanueva, Sherwin Gatchalian, Nancy Binay and Angara said it was “utterly disappointing” that not a single family member of the 32 health-care workers who died of COVID-19 had benefited from the law since it was enacted more than two months ago.

“The Senate labored hard to immediately pass the first Bayanihan law as a strong response to the pandemic, thinking that our [medical] front-liners would be provided all the support they need,” they said.

“We strongly urge [you] and the DOH to immediately facilitate the distribution of the compensation provided under [the law],” they told Duque.

He said he would take up the matter with Duterte when they meet on Thursday.

Health Undersecretary Maria Rosario Vergeire on Wednesday said the DOH would have the guidelines this week for the release of the benefits.

She, however, did not explain why it had taken so long for the DOH to draw up the guidelines.

Vergeire said the DOH, together with the Department of Budget and Management and the Department of Labor and Employment, was preparing a joint administrative order for the implementation of the Bayanihan law’s provisions for the compensation of health workers.

In preparation for the payout, Vergeire said the DOH was calling up the heirs of the 32 health workers who had died “for the submission of necessary documents.”

The DOH is also collating information “to identify those who were classified as severe patients,” she said.

As of Monday, health-care workers accounted for one in six coronavirus infections. Of the total 2,669 infected with the virus, 1,438 had recovered.

Nurses have the highest number of infections, 980, followed by doctors, 727, and nursing assistants, 173.

—WITH REPORTS FROM LEILA B. SALAVERRIA AND JOVIC YEE