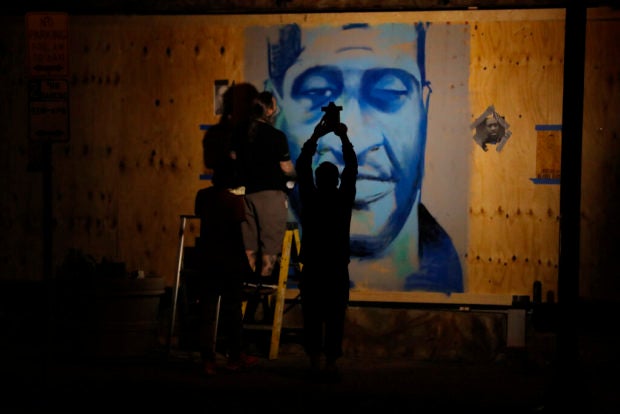 An artist creates an image of George Floyd on May 28, 2020, in Minneapolis. Image: AP/Julio Cortez

The store that called the police on George Floyd for the suspicion of using a counterfeit $20 bill has spoken up to condemn police violence and pledged support for Floyd’s family.

Mahmoud Abumayyaleh, owner of Cup Foods in Minnesota, United States, extended the store’s condolences to Floyd’s family and expressed sadness and outrage for what happened in front of his store.

“There is no justification for the use of reckless force displayed by the police that murdered George Floyd. We support this protest and share in their anger,” a lengthy statement posted on Abumayyaleh’s Facebook account on June 1 read.

Cup Foods would like to extend its deepest condolences to George Floyd’s family, friends and the South Minneapolis…

“The incidents that led up to this event teach us all an important lesson about dealing with police,” the statement read.

The store explained that as there is a state policy requiring stores to report to police the cases of counterfeit bills, dealing with such cases is a routine practice for his business.

“We report forged money, then the police come and ask patrons about the bill to trace its origin,” it noted.

The statement noted that Abumayyaleh was not present at the store at the time and that an employee called the police on Floyd for allegedly presenting a counterfeit bill.

“Four officers showed up to the scene, and they proceeded to escalate the situation with increased use of violence and force. The nephew of the store owner, who was also present at the time, was yelling for the police officers to stop, and was pushed away by one of the cops,” the statement read.

“Sadly, we all know the rest of the story. Despite the fact that George never resisted arrest, police proceeded to end George Floyd’s life over a counterfeit bill. It’s likely that George did not even know that he had a fake bill to begin with. We are deeply saddened for our part of this tragedy,” it continued.

It was also emphasized in the statement that while police are supposed to protect communities, they instead keep on “abusing their power and violating the people’s trust.”

“We realize now that escalating situations to the police almost always does more harm than good, even for something as harmless as a fake bill,” it read. “This is not an isolated incident: they have shown time and time again that they do not know how to peacefully handle conflicts in our community.”

The store also lamented that “[by] simply following procedure we are putting our communities in danger.”

“Until the police stop killing innocent people, we will handle incidents like this one using non-violent tactics that do not involve police. We must stand together to fight against institutional racism,” it pledged.

Cup Foods has been in regular contact with Floyd’s family and are “joining each other in prayer and solidarity, standing together to demand accountability from the cops,” according to the statement. The store will also be donating to pay for Floyd’s memorial service.

Stating that it is “our time to demand justice,” the store encouraged the public to work within their communities to find alternatives to policing “until the point that local and state officials decide to seriously hold police accountable once and for all.”

“We will continue fighting with our South Minneapolis community until justice is served, not only for George Floyd, Ahmaud Arbery, and Breonna Taylor, but for everybody who is affected by police violence in our country,” the statement concluded.

Floyd, who was under arrest for suspected forgery attempt, died pleading for air as police officers pinned him down to the ground, with ex-officer Derek Chauvin kneeling on his neck for eight minutes and 46 seconds. Chauvin has since been charged with murder.

The killing of Floyd has sparked numerous protests throughout the U.S. that have led to looting, vandalism and skirmishes between police and protesters for the past days. JB