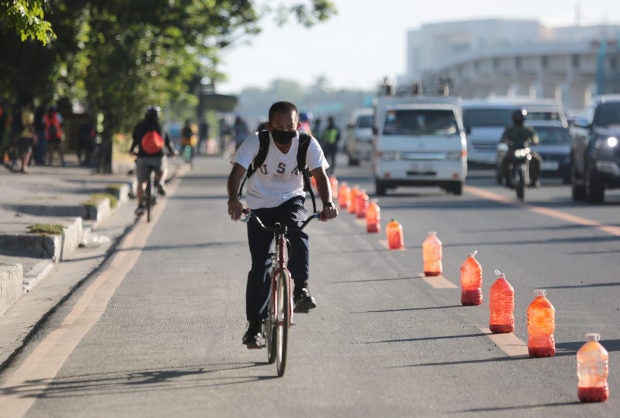 MANILA, Philippines — An official of the Metropolitan Manila Development Authority (MMDA) said that members of a bikers group who put up temporary barriers to protect cyclists on Commonwealth Avenue, Quezon City on Tuesday would be cited for obstruction and fined P1,000 each.

“They cannot just put up bike lane protectors without notifying authorities, especially made from plastic bottles,” MMDA spokesperson Celine Pialago said. “They are not enough to provide safety for our bikers from speeding vehicles. They are very dangerous, in fact.”

She was referring to Bikers United Marshalls (BUM), whose members laid down a row of 6-liter bright orange plastic bottles filled with water to set apart one lane of the busy highway near Don Antonio Avenue for bicyclists.

Pialago said they were coordinating with the police for other possible charges that could be filed against BUM for “putting lives of people in danger.” She suggested that for now, cyclists should use the sidewalks.

In a statement, BUM criticized Pialago for her statements, saying its members were “well-meaning citizens who are taking decisive actions to protect the thousands of bicycle commuters on our roads.”

“We believe we have done our bikers (mostly without protective gear) our humble service. If the MMDA sees otherwise, then we have to be ready for the consequences of the incompetence of our leaders,” it added.

BUM clarified that the water bottles were used as temporary markers by members who acted as volunteer traffic marshals of the local traffic enforcement unit for their bike traffic monitoring from 6 to 8 a.m.

It added that BUM members removed the bottles after they ended their duty after the morning rush hour.

The MMDA and other national government agencies have announced plans for bike lanes on some roads in the metropolis, including Edsa, but these remain on the drawing board.

“MMDA keeps on promising bicycle infrastructure and to hear them say that it will take time before they take action to protect bikers is utterly disappointing. [BUM] has demonstrated that simple acts of love and courage can be done immediately and without procrastination,” BUM said.

Based on the group’s monitoring, 20 bikers per minute — equivalent to 2,400 bikers in two hours — traveled on the southbound lane (going to Quezon Memorial Circle) of Commonwealth Avenue on June 1, the first day Metro Manila was placed under general community quarantine.