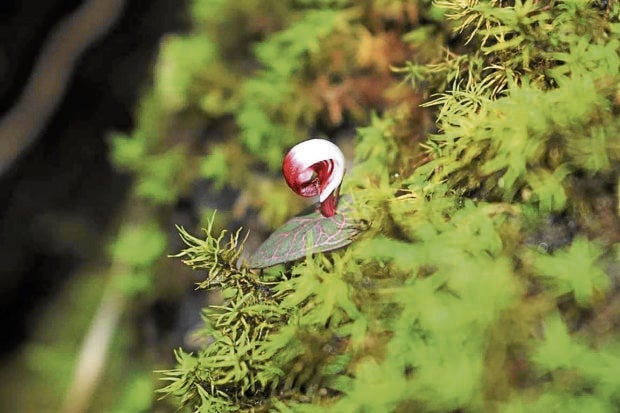 ENDEMIC BLOOM The new species of helmet orchid discovered in Palawan can be seen under the shades of stunted trees and shrubs, particularly on moss-covered clay embankments. —JEHSON CERVANCIA/CONTRIBUTOR

PUERTO PRINCESA CITY, Palawan, Philippines —A new species of helmet orchid was discovered in Palawan province, a team of scientists has reported.

Identified as Corybas circinatus, the wild orchid is the second of its species found on the island province.

Phytotaxa, a global scientific journal, published on May 27 the discovery made by a team of researchers composed of Danilo Tandang, Ulysses Ferreras, Annalee Hadsall, Stephanie Pym-lyon, Alastair Robinson and Rene Alfred Anton Bustamante.

The latest recorded discovery is a testament to Palawan’s thick biodiversity that remains “poorly documented,” said Bustamante, a botany researcher for more than ten years of the Philippine Taxonomic Initiative Inc., a nongovernmental organization based in Barangay Maligaya of El Nido town.

“Each discovery of this kind shows us how much we still don’t know about Palawan’s biodiversity,” Bustamante said in an email interview. “In this day and age, when it seems that we’ve discovered everything, Corybas circinatus reminds us of how much our environment can still surprise us.”

Corybas circinatus, which is yet to be given a local name, was described as a distinct species from all its known genus. It has a four-lobed labellum, with two of its longer upper lobes curved over two shorter lobes. It has a cucullate dorsal sepal with a retuse apex, and a small glandular proturbance at the front of its pedicel.

The new endemic helmet orchid was recorded in five locations in Palawan, namely, Mt. Bloomfield and Mt. Bahile in Puerto Princesa City; Mt. Mantalingahan in Rizal town; and Mt. Victoria and Sultan Peak in the municipality of Narra.

The new species was immediately distinguished based on the team’s existing knowledge of the genus. However, Bustamante said that other subject matter experts had to peer-review their findings for proper documentation.

“A review of all known Corybas species was carried out as part of our research to document it properly. Our findings were summarized and submitted to a peer-reviewed journal, who suggested improvements and, importantly, confirmed our findings,” Bustamante said.

The first helmet orchid discovered in the province was first photographed at Mt. Victoria in June 2007 by Robinson, an Australian botanist who was also part of the research team that discovered the new species. Though categorically recognized as a new species at that time, the helmet orchid remained scientifically undescribed, as permits to collect samples were not secured until such a time that there were locally led expeditions. Later on, several other scientific excursions were held throughout Palawan by the Philippine Taxonomic Initiative Inc.

Usually found on mineral-rich or “ultramafic” soil, Corybas circinatus is associated with extremely high levels of endemic biodiversity, or plants that are specialized to grow on challenging soil that are found nowhere else.

Helmet orchids are usually found in India and Australia where it grows among mosses and leaf litters on the forest floor.

According to the Philippine Biodiversity Conservation Foundation, the country held four other known Corybas species, including the two discovered in Palawan.

“Unfortunately, since this soil is rich in minerals, it is under constant threat from mineral prospectors,” said Bustamante.

Bustamante also hoped that the recent discovery of Corybas circinatus could inspire the younger generations to preserve and conserve the natural wonders of Palawan.

“My hope is that the publication of this species helps to highlight the incredible and still poorly documented biodiversity of Palawan, and demonstrates how we, as stakeholders in this land, should protect our natural habitats so that species such as this one will continue to thrive for future generations to treasure,” Bustamante said. INQ