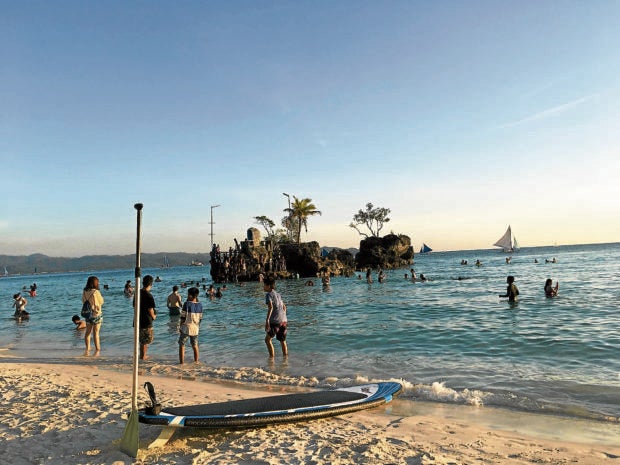 ISLANDERS FIRST Boracay residents will have their beaches to themselves with tourists still banned on the island. —INQUIRER FILE PHOTO

ILOILO CITY, Iloilo, Philippines — Swimming will be finally allowed on Boracay Island even if it remains closed to tourists.

Acting Mayor Frolibar Bautista of Malay town said the swimming ban will be lifted as Boracay Island, which is part of Aklan province, and the rest of Western Visayas shifted to modified general community quarantine (MGCQ) starting on Monday.

Swimming, however, will still be regulated to ensure physical distancing and other health measures.

“We may designate swimming areas along the 4.5-kilometer beach and regulate the number of those going there at a time. It will depend on a trial run in the next few days,” Bautista told the Inquirer on Sunday.

Under the guidelines issued by the Inter-Agency Task Force on Emerging Infectious Diseases (IATF), indoor and outdoor noncontact sports including swimming are allowed under MGCQ provided that minimum public health standards are followed.

Bautista said no tourists will still be allowed on Boracay Island. But a number of tourists remain stranded on the island.

Local chief executives of Panay Island’s provinces of Iloilo, Antique, Aklan and Capiz and of the island-province of Guimaras have also agreed to lift border restrictions. But Iloilo City Mayor Jerry Treñas said they agreed that ports and airports in Western Visayas would stay closed and would only accommodate returning overseas Filipino workers and stranded residents.

In Cebu City, Mayor Edgardo Labella asked residents to be vigilant as the city shifted to general community quarantine (GCQ) on Monday.

“We can never be complacent as long as there is no vaccine. We have to live with the virus,” he added.

Under GCQ, several nonessential industries will be allowed to reopen. Public transport will also be allowed to resume operations at a reduced capacity to ensure proper social distancing. Religious gatherings are permitted but there should not be more than 10 attendees.

Last May 27, Cebu City was classified as the lone local government unit in the country that would be on modified enhanced community quarantine (MECQ) starting June 1. This prompted Labella to send a letter to the Department of the Interior and Local Government Central Visayas Director Leocadio Trovela, who is also the regional IATF chair, appealing to place Cebu City under GCQ instead.

In the evening of May 28, President Duterte appeared on national television and said only the National Capital Region, Davao City, and some provinces in Luzon would be on GCQ while the “rest of the country” would transition to MGCQ, the lowest form of lockdown enforced by the government. The President did not specifically mention that Cebu City will be on MGCQ, contrary to an earlier Inquirer report.

It was on May 30 when the IATF announced that it approved the request of Labella to put Cebu City under GCQ until June 15. But it also placed the rest of Central Visayas under the same category instead of the expected MGCQ.