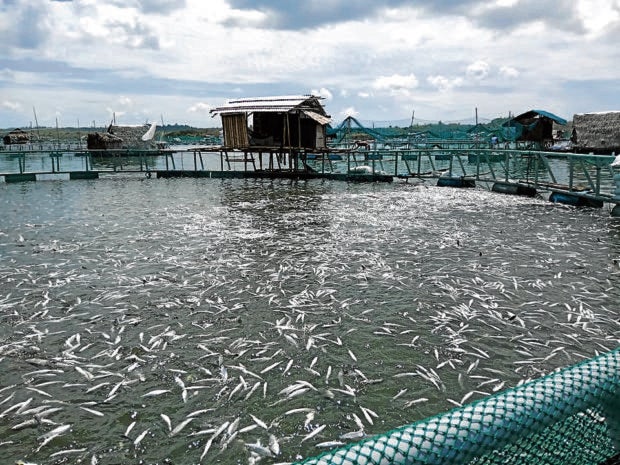 DEAD FISH An aquaculture zone for “bangus” (milkfish) in the coastal villages of the towns of Bolinao and Anda in Pangasinan was hit by a fishkill on May 20. —BFAR-1 PHOTO

SAN FERNANDO CITY, La Union, Philippines — After a massive fishkill on May 20, the aquaculture areas in Kakiputan Channel in Bolinao and Anda towns, Pangasinan province, should be relocated due to their deteriorating water qualities there, according to officials of the Bureau of Fisheries and Aquatic Resources (BFAR).

Segundina Gaerlan, officer in charge of the BFAR in the Ilocos region, said rehabilitating the aquaculture zones would no longer work because of the high salinity and lethal levels of ammonia nitrogen found in the area.

The BFAR has proposed an area in Barangay Salud, Lucero, Luciente 1 and Luciente 2 in Bolinao as the new aquaculture zone. The agency usually prepares the rehabilitation plan for provision of fingerlings to the affected aquaculture operators when a fishkill strikes.

Water samples collected recently from the aquaculture zones in Kakiputan Channel showed the presence of plankton that produced marine biotoxins that caused the fishkill, Gaerlan said.

Kakiputan Channel is a 7-kilometer stretch of water shared by Bolinao and neighboring Anda town.

P40-million lossThe coastal villages of Culang, Luna and Catubi in Bolinao and Awag, Dolaoan and Mal-Ong in Anda were hit by fishkill on May 20, leaving about P40 million in losses.

Gaerlan said the stocks of “bangus” (milkfish) fingerlings, or postfingerlings, in 157 cages were damaged. “If the fingerlings were converted into marketable sizes, the total loss would be 1,215 metric tons. For stocks that were ready for harvest, around 79 MT of bangus had died,” she said.

The BFAR’s recent water quality tests in the aquaculture zone showed there were low levels of dissolved oxygen. A neap tide between May 18 and May 20 and the abrupt changes of the weather conditions had also affected the water quality and was aggravated by aquatic pollution, leading to the fishkill. A neap tide is characterized by minimal tidal changes, or almost no water movement, causing low dissolved oxygen level in the water. It happens when the moon is on its first quarter and last quarter phases.

New fish cagesIn an inspection of the fish culture areas last week, BFAR personnel found new fish cages that were not permitted by the agency.

In the past, illegal fish pens had been largely blamed for massive fishkills that hit several coastal villages.

“In the case of Anda and Bolinao where the aquaculture areas are operated by the local government units, we still need to validate the list of registered operators,” Gaerlan said.

Bangus growers in the two towns experienced the worst fishkill in May 2002 when at least P10 million worth of milkfish floated in six villages.