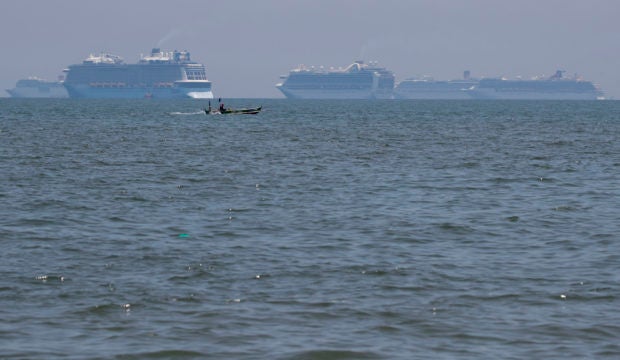 A boat passes by cruise ships carrying Filipino and foreign seafarers anchored at Manila’s bay, Philippines, Thursday, May 7, 2020, as they wait for clearance from the Bureau of Quarantine to dock at the port. Tens of thousands of workers have returned by plane and ships as the pandemic, lockdowns and economic downturns decimated jobs worldwide in a major blow to the Philippines, a leading source of global labor. (AP Photo/Aaron Favila)

MANILA, Philippines — When his cruise ship sailed into Manila Bay after weeks of voyaging like a castaway amid port closures set off by the global pandemic, Erick Arenas felt he was finally home.

But the 34-year-old dance performer of the Ovation of the Seas saw an ominous sign even before he can set foot on homeland. An array of the world’s best-known cruise ships was waiting at anchor off the Philippine capital to drop off thousands of Filipino crew members like him who were displaced across the world by the contagion.

“I thought I was on my final mile to home,” said Arenas, whose homecoming was made tragic by the death of his father from pneumonia a few weeks before his ship reached Manila.

Nearly a month after disembarking, however, Arenas was still stuck in complete isolation in a hotel used for quarantine in metropolitan Manila, about an hour’s drive from his home in Cavite province.

“It’s not only COVID-19 that we’re fighting against. It’s our mental health, it’s our, you know, frustration,” Arenas told The Associated Press in an online video interview from his hotel room overlooking a business district devoid of the usual crowds under a lockdown. 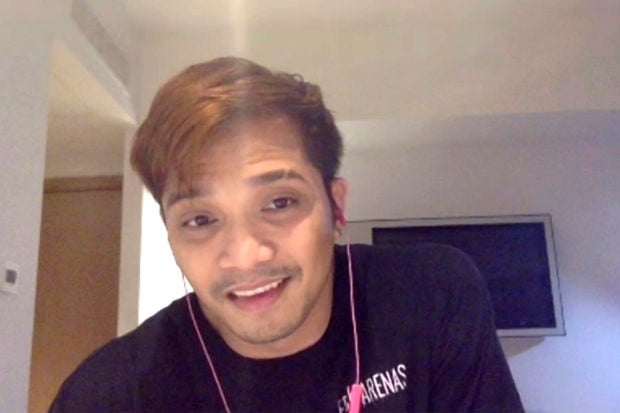 In this image made from video, cruise ship performer Erick Arenas, 34, speaks to the Associated Press via video chat while under quarantine in a hotel in Manila, Philippines, Thursday, May 28, 2020. Tens of thousands of workers have returned by plane and ships as the pandemic, lockdowns and economic downturns decimated jobs worldwide in a major blow to the Philippines, a leading source of global labor. (AP Photo)

Tens of thousands of workers have returned by plane and ships as the pandemic, lockdowns and economic downturns decimated jobs worldwide in a major blow to the Philippines, a leading source of global labor.

The sudden influx combined with the government’s limited quarantine and virus-testing capability and bureaucratic snags to set off chaotic delays and congestion in Manila hospitals, hotels, and makeshift isolation structures. With public transport and flights restricted in the capital, the populous epicenter of the viral outbreak, the hordes of workers were effectively trapped from moving on to their provincial destinations.

“It was a mix of chaos, impatience, and longing for my family,” housemaid Lorna Alba said of her 38 days of isolation in a quarantine hotel in suburban Quezon City.

The 28-year-old mother of three worked in Dubai in the oil-rich United Arab Emirates but was sent home when she caught fever and was suspected by her Arab employer of being a coronavirus carrier. She said a test showed she was not.

Upon arrival at Manila airport in April, Alba said she and other workers from an Emirates flight were whisked off to the hotel, where she waited for half a month without being told what was happening before taking another test for the virus that showed she was well.

“My stress was starting to worsen into a depression,” she told The AP.

Faced with complaints, President Rodrigo Duterte ordered government agencies to help more than 24,000 workers, including Alba, to get home. He gave a one-week deadline ending on Sunday, sparking a flurry of movements.

“I hope this will not happen again,” Duterte said in a televised meeting with key Cabinet officials Thursday, lamenting the difficulties encountered by the workers.

At least 300,000 more displaced Filipinos were expected to journey home, “but this time, we should know what to do,” the blunt-speaking leader said. 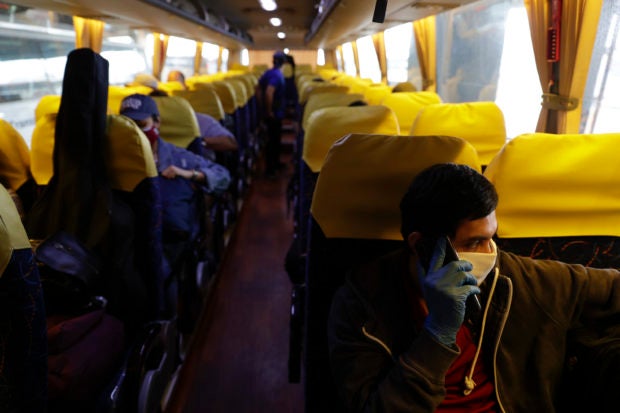 Christopher Bagay, right, a kitchen crew of the Aida Sol cruise ship in Europe, talks on his phone as he heads home together with other overseas Filipino workers on a government-provided bus ride in Manila, Philippines Thursday, May 28, 2020. Bagay said it took him about two months to go through repetitive quarantines in Spain, Germany, and Manila before he was finally allowed to go home. Tens of thousands of workers have returned by plane and ships as the pandemic, lockdowns and economic downturns decimated jobs worldwide in a major blow to the Philippines, a leading source of global labor. (AP Photo/Aaron Favila)

Hans Cacdac, who heads the Overseas Workers Welfare Administration, told a congressional hearing Friday that public transport restrictions under the Manila lockdown prevented the workers from being moved out of the capital en masse, but said most have been brought back to their provinces this week after the president intervened. Only 4,000 remain stranded in the capital, including about 1,500 onboard cruise ships in Manila Bay, he said.

Lawmakers hit the lack of coordination and foresight that led to congestion.

Interior Undersecretary Epimaco Densing III said that a 14-day quarantine had been relaxed to allow the workers to immediately leave for home once test results clear them of infection. The move will help prevent quarantine congestion and will cut short the extra two-week wait in isolation that prolongs the homecoming of healthy workers, officials said.

Christopher Bagay, a kitchen crew of the Aida Sol cruise ship in Europe, said it took him about two months to go through repetitive quarantines in Spain, Germany, and Manila. Arriving home in Laguna province, south of Manila, on Thursday night, he sneaked into a room and hid from his 3-year-old son after deciding to go into 14 more days of home quarantine to protect his family.

Arenas said he used the long quarantine that delayed his return home to record songs, mostly in duets with fellow entertainers, that were a tribute to his late father. He posted the poignant tunes on Facebook, including one with a message where he thanked friends around the world for reaching out to him.

“It is challenging mentally to be isolated in your room,” Arenas said. “But it is even harder when you lose a family member back home while in isolation.”