MANILA, Philippines — A price freeze on bicycles as well as the provision of incentives to bike-riding workers were pushed in a Senate hearing on Thursday as the government-imposed lockdowns restricted the use of public transportation in a bid to contain the spread of the coronavirus disease. 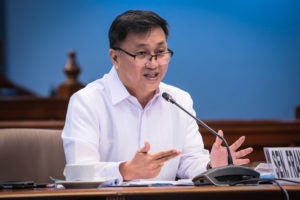 “If we can advise DTI (Department of Trade and Industry)—kasi merong (because there is an) abrupt rise ng prices ng bisekleta ngayon (of bicycle prices right now)—there should be a cap or a freeze on bicycles kasi nagaagawan yung iba (because many are purchasing bicycles),” Senator Francis Tolentino said.

Tolentino, a former chairman of the Metropolitan Manila Development Authority (MMDA), also asked about the status of the bike lanes that were previously put up across Metro Manila.

“A few years ago when I was MMDA chairman, I initiated several bicycle lanes in Metro Manila,” the senator said, adding that the Metro Manila Council (MMC) at the time even passed an ordinance on the use of the bike lanes.

In response, MMDA deputy chairman Frisco San Juan Jr. told the Senate panel that additional bike lanes, on top of the existing ones, were being constructed.

(The bike lanes are operational and, in fact, there were additional we were to continue but then COVID-19 happened). 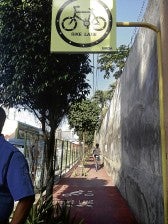 The sidewalk on the northbound side of Edsa between Ayala Avenue and Magallanes is now a bike lane. JAYMEE GAMIL

However, the construction was halted due to the coronavirus pandemic, he said.

San Juan added that the construction of the bike lanes will resume once the government places Metro Manila under the general community quarantine (GCQ).

But Tolentino said that “we have to do away with that notion that what we are doing is just to adjust (and) experiment.”

“Totoo na po to (This is the real deal). The new normal will prod us to adjust and innovate and the utilization of bicycles will probably be part of that innovation,” he added.

The lawmaker then reminded San Juan of several other bike lane ordinances issued by some Metro Manila local government units (LGUs) in the past, which he said can be implemented instead of having to request new ones.

San Juan responded with the assurance that the MMDA will check with the LGUs on the status of the said ordinances.
Tolentino also suggested that the MMDA revive “bike vans” which can be rented out as parking spaces for bikers.

(We initiated bike vans before, large containers. They can park there. The problem now is parking, their bike might get stolen. The MMDA rented it out as an income-generating project. Maybe that can be revived as well).

Senator Pia Cayetano, chair of the committee, agreed with Tolentino’s pronouncement and said that the time of experimenting is over. 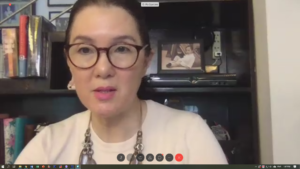 “If we do not do this now and pave the way for the inclusion of non-motorized modes of transportation…we will lose this opportunity. Alam na natin yan, mapupuno na naman ng mga bus, ng mga private vehicles o kung ano pa man. Mahihirapan tayo to carve out our space right now,” she said.

(If we do not do this now and pave the way for the inclusion of non-motorized modes of transportation…we will lose this opportunity. We know it, the streets will be occupied by buses, private vehicles and others. It will be a challenge for us to carve out our space right now.)

“The COVID has organically provided that space for bikes, for walkers and other non-motorized forms (of transportation) so dapat hindi na yan i-give up kaya talagang ako, seize the moment (that’s why we should not give this up, for me, seize the moment),” she added.

On the other hand, San Juan also proposed for the provision of incentives for employees biking to work as he expressed support for the bills being tackled by the Senate panel.