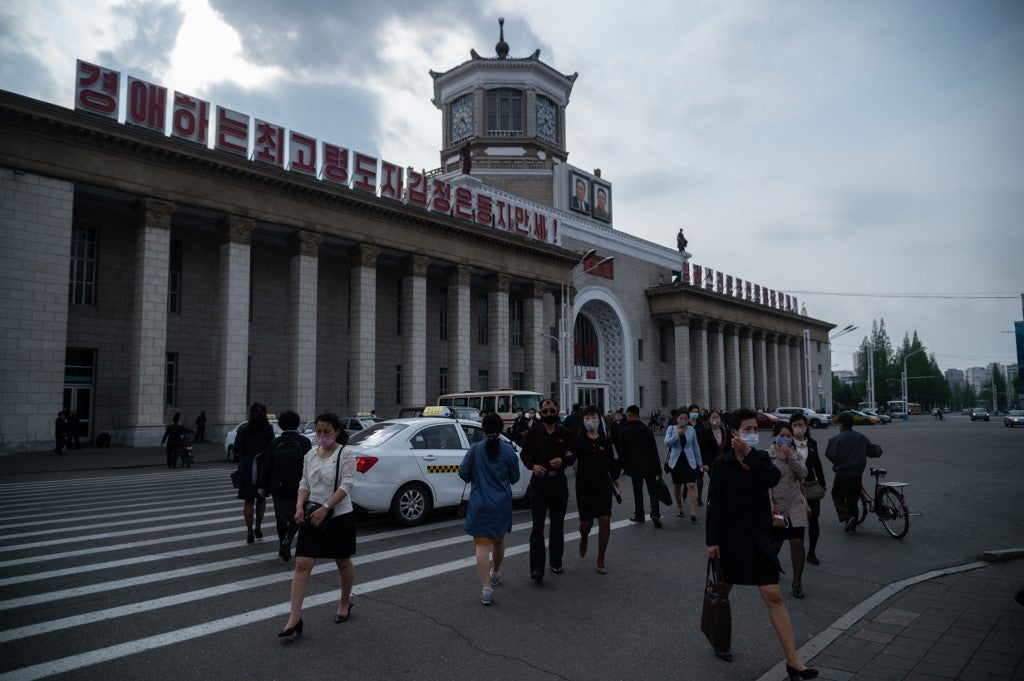 Commuters walk outside the central railway station in Pyongyang on May 2, 2020. (Photo by KIM Won Jin / AFP)

Britain has shuttered its embassy in North Korea and all its diplomats have left the country, its ambassador said Thursday as Pyongyang maintains strict entry controls to try to prevent a coronavirus outbreak.

The North has closed its borders and insists it has not had a single case of the virus that emerged in neighboring China late last year and has since swept the world.

The closure was a temporary move and came because Pyongyang’s “restrictions on entry to the country have made it impossible to rotate our staff and sustain the operation of the Embassy,” a Foreign Office spokesperson said.

Ambassador Colin Crooks tweeted: “The #BritishEmbassy in #Pyongyang closed temporarily on 27 May 2020 and all diplomatic staff have left the #DPRK for the time being.”

The Swedish embassy — which remains open — replied that they would miss him and his team “and hope they can return soon”.

Britain intends to maintain diplomatic relations with the North “and will seek to re-establish our presence in Pyongyang as soon as it is possible to do so”, the Foreign Office said.

Early in the outbreak Pyongyang imposed tight quarantine restrictions on all resident foreigners, including a virtual lockdown in their own premises that Russian ambassador Alexander Matsegora described as “morally crushing”.

Those rules were later eased and dozens of diplomats and other foreigners were allowed to leave the country in March, when several missions in Pyongyang closed, among them the German embassy and France’s representative office — Paris does not maintain full diplomatic relations with the North.

Hundreds of foreigners remain in the country.

Analysts say that the North is unlikely to have avoided infections, and that its ramshackle health system could struggle to cope with a major outbreak.