PUERTO PRINCESA CITY – The initial batch of returning overseas Filipino workers (OFWs) has arrived at the Puerto Princesa Port (PPP) as the national government pushed for their repatriation.

About 54 individuals, 37 of whom were city residents and 17 from different municipalities, arrived in a pre-arranged sea travel aboard MV St. Leo the Great of the 2Go Shipping Lines. 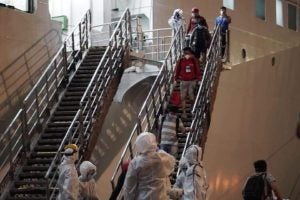 Overseas Filipino workers (OFWs) who were affected by the coronavirus disease crisis, arrive at the port of Puerto Princesa City. —PALAWAN MOVING FORWARD

Winston Arzaga, chief of the Provincial Information Office (PIO), said the provincial government was poised to receive other schedules from the Overseas Workers Welfare Administration.

“So far, we don’t have other schedules but since the President already ordered to hasten their (OFWs) return home, we are ready to receive them,” Arzaga said.

The results were “all good,” which then greenlit the returning OFWs to be transported to their respective municipalities through arranged van transfers by the local governments. 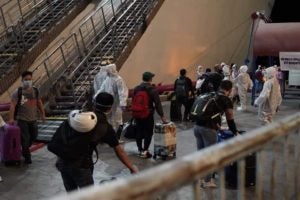 Dr. Mary Ann Navarro, chief of the Provincial Health Office, recently said that all OFWs would undergo quarantine either at home or at an isolation area prepared by their respective municipal governments.

City Mayor Lucilo Bayron, in Executive Order on May 14, delineated the strict protocol for returning OFWs in the city, which required undergoing 14-day mandatory quarantine in designated facilities.

“A home quarantine is not allowed,” the order said.

OWWA records show that there were more than 1,000 OFWs from Palawan province in 2018.