OFWs stuck in quarantine: ‘Somehow it drives you crazy’ 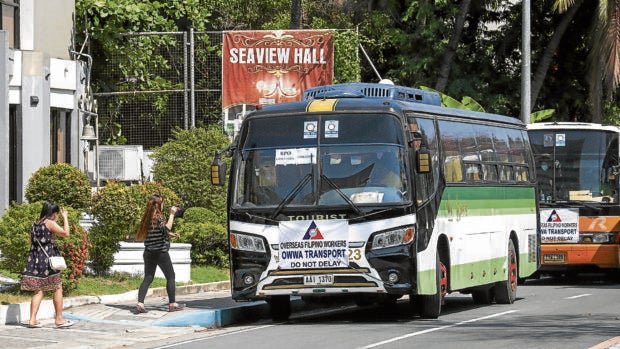 TESTING CENTER Repatriated overseas Filipino workers are bused to Palacio de Maynila events and exhibit center for testing for SARS-CoV-2, the virus that causes COVID-19, in this photo taken on May 8. —LYN RILLON

MANILA, Philippines — Jerome has been longing to see his children to give them “pasalubong,” which he has been keeping in his luggage for almost a month. That would have to wait longer though, along with the hugs and kisses and the joy the 31-year-old seafarer expects to see in the eyes of his kids when they receive his presents.

The reason: The local government in his hometown is requiring him to go on quarantine for 14 days in a school.

Jerome, a marine engineer and a father of two, arrived in Leyte province on Monday night after staying for almost a month in a hotel in Manila, which serves as one of the quarantines for returning overseas Filipino workers (OFWs).

His trip to Leyte came only after President Rodrigo Duterte directed labor officials to send home in a week’s time some 24,000 repatriated workers who were still staying in quarantine and holding centers in Metro Manila because they had yet to get results of tests for the new coronavirus.

Duterte on Tuesday ordered local officials to “open the gates of [their] territories” to OFWs returning to their families after testing negative for the virus.

He issued the order amid reports that some local officials were blocking the return of repatriated workers even if they had completed the 14-day quarantine requirement, and tested negative for the coronavirus.

The President said it was “cruel” for local governments to refuse the workers entry, reminding them that only the national government could impose travel restrictions.

From Tacloban Airport, Jerome was fetched by a representative of the Overseas Workers Welfare Administration (OWWA) who took him to a hotel. On Tuesday, he was told to stay for 14 days in a school that his municipal government turned into a quarantine and then spend 15 more days of isolation at home.

“Thirty days is too much,’’ said Jerome, who asked that his real name be withheld because he doesn’t want to get into trouble with the local government.

But it is up to local governments to repeat the 14-to-21 day mandatory quarantine and testing that the OFWs had already undergone as long as the workers could come home, Interior Secretary Eduardo Año said on Tuesday.

Jerome arrived from South Korea on April 30. From Ninoy Aquino International Airport, he and about a dozen colleagues were taken to a hotel on Roxas Boulevard in Manila.

He said his swab test was taken on May 3, but the results, which turned out to be negative, came out only on May 21.

“Although all I do is eat, sleep and jog inside my hotel room, somehow it drives you crazy being stuck there for that long,” he said. He added that the accommodation and food provided by his employer were way better than those extended to other OFWs.

True enough, some OFWs were not as lucky as Jerome.

Liza, 38, has been issued a certification that she is clear of COVID-19 and is allowed to go home. But she remains stranded at a lodge in Pasay City as of Tuesday.

“I was told [Monday] to pack my things because somebody would fetch me and take me to the airport. But no one came,” she said in a phone interview.

Liza arrived on April 4 from Kuwait where she had worked as a household service worker. Her swab test was taken on May 7, but the results and certification were released only on May 24.

She and several other OFWs are overstaying at Liza Lodge, where their food and accommodations are being paid for by the OWWA. Most of them have stayed beyond the required 14-day quarantine.

“I really miss my family in Bukidnon. I hope I can go home soon,” she said, adding that just like most of the repatriates at the hotel, she no longer had money to buy even soap and shampoo.

Liza said most of the people in her group came from a shelter for abused, distressed and runaway OFWs in Kuwait. They had been unemployed for more than a month and had no money when they availed themselves of the mass amnesty repatriation program.

Other OFWs stranded in Manila are using up their earnings for board and lodging.

Floramae Fernandez, 26, an entertainer in Japan and an OFW since 2016, has been staying alone at a place on Vito Cruz Street in Malate, Manila, for P15,000 monthly since Feb. 15 after being caught in the Luzon lockdown.

The OFWs from Cebu and Mindanao (some are seafarers) stranded in Manila formed a chat group to share their misery, longings and hopes to return to their own provinces soon.

Fernandez, along with 30 other OFWs, is still awaiting the results of her swab test before she can go home to Cebu.

“I’m going mad here … I feel sad, afraid and depressed,” she said. “I am really longing to see my family.”

She said she would no longer work abroad and just stay with her family, adding that she would raise hogs for livelihood.

Presidential spokesperson Harry Roque said Malacañang would realign some items in the 2020 national budget to fund the trip home of the 24,000 repatriated workers stranded in Metro Manila.

Some 60,000 of the more than 300,000 Filipino workers who are expected to return to the country this year are coming home in the next two months.

In his ninth report to Congress, Mr. Duterte said the Department of Tourism had identified 737 hotels nationwide, which set aside 44,871 rooms for repatriated OFWs.

—With reports from Julie M. Aurelio and Jeannette I. Andrade

Read Next
Solgen: SC has no power over ABS-CBN case
EDITORS' PICK
Duterte praises military but slams police for poor discipline, corruption
COVID-19 cases surging in all regions and provinces, says DOH
Acer starts the year off strong with the Aspire Vero National Geographic Edition
DOH: Too early to say COVID-19 cases are declining
The best of bayside and city living at SMDC’s Sail Residences
Over 3 Million worth of prizes to be won at Smart Padala’s SENDali Manalo Promo!
MOST READ
Expert cites need to ‘reimmunize’ whenever there’s new concerning variant
Duterte praises military but slams police for poor discipline, corruption
Duterte wants Lapulapu statue in Cebu ‘bigger and higher’ than Magellan’s
Djokovic has to comply with rules to go to Spain, PM says
Don't miss out on the latest news and information.