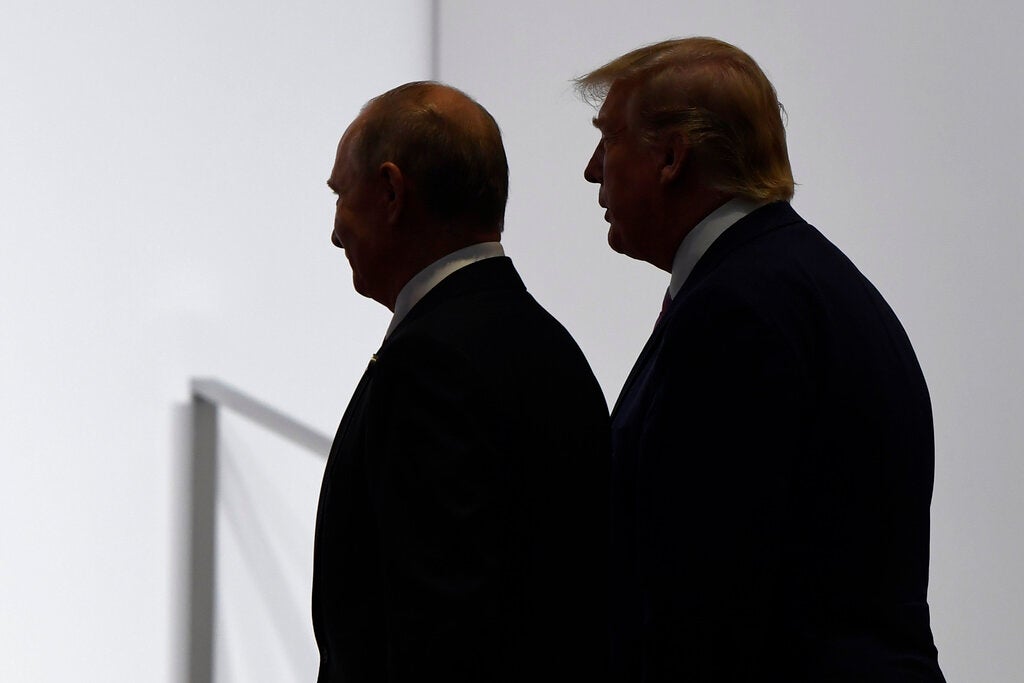 President Donald Trump and Russian President Vladimir Putin walk to participate in a group photo at the G20 summit in Osaka, Japan in this 2019 file photo.  (AP)

BRUSSELS — The European Union on Friday urged the United States to reconsider its plan to withdraw from a military treaty allowing observation flights over more than 30 countries, as NATO insisted that Russia has long flouted its commitments under the agreement.

President Donald Trump said Thursday that Russian violations make it untenable for the United States to stay in the Open Skies Treaty. Washington has signaled that it will pull out in six months, although Trump hinted that he might reconsider the decision.

The treaty came into force in 2002. It was meant to promote trust between the U.S. and Russia by allowing its 34 signatories to conduct reconnaissance flights over each other’s territories to collect information about military forces and activities.

“Withdrawing from a treaty is not the solution to address difficulties in its implementation and compliance by another party,” EU foreign policy chief Josep Borrell said. “While continuing to urge Russia to return immediately to the full implementation of the treaty, I call upon the United States to reconsider their decision.”

Noting that the agreement has led to more than 1.500 reconnaissance missions and “is an important contribution to European and global security and stability,” Borrell said the EU “will be examining the implications this decision may have for its own security.”

Earlier, in a joint statement, the foreign ministries of Belgium, the Czech Republic, Finland, France, Germany, Italy, Luxembourg, Netherlands, Spain and Sweden said the pact “is a crucial element of the confidence-building framework that was created over the past decades in order to improve transparency and security across the Euro-Atlantic area.”

“We will continue to implement the Open Skies Treaty, which has a clear added value for our conventional arms control architecture and cooperative security. We reaffirm that this treaty remains functioning and useful,” the 10 said, even though they share U.S. concerns about Russia’s respect of the pact.

They called on Russia to lift flight restrictions, notably over its Kaliningrad region, which lies between NATO allies Lithuania and Poland. Of the 10 countries, Finland and Sweden are not NATO members.

Already in 2018, NATO leaders expressed concern about “Russia’s ongoing selective implementation” of the treaty and other conventional arms control pacts. European nations have conducted most of the flights, which often take place over Russia and Belarus.

After chairing a meeting of NATO envoys, Secretary-General Jens Stoltenberg said that “Russia has for many years imposed flight restrictions inconsistent with the treaty, including flight limitations over Kaliningrad, and restricting flights in Russia near its border with Georgia.”

In a video statement, he said that the country’s “ongoing selective implementation has undermined the Open Skies Treaty.”

Noting that the U.S. might reconsider pulling out should Moscow change its stance, Stoltenberg said that “NATO allies are engaging with Russia to seek Russia’s return to compliance at the earliest date possible.”

NATO operates by consensus, and a number of European allies clearly do not agree with Washington. German Foreign Minister Heiko Maas acknowledged that Russia was not respecting the treaty, “but from our point of view, this does not justify a withdrawal.”

He said his counterparts in Britain, France, and Poland have repeatedly made this clear to Washington, and that Germany “will work intensively in this time with our like-minded partners for the U.S. to reconsider its decision.”

Last year, Trump pulled the U.S. — by far the biggest and most influential of the 30 NATO member countries — out of the Intermediate-Range Nuclear Forces treaty that it agreed in 1987 with the Soviet Union, blaming Moscow for developing a missile that does not comply with it.

Russia’s foreign ministry on Friday said the U.S. withdrawal was consistent with what Moscow considers to be Washington’s aim to dismantle arms control and security agreements.

In a statement, the ministry said the withdrawal decision “did not cause surprise on the Russian side — it fully fits into (the U.S.) line on the destruction of the entire complex of agreements in the field of arms control and confidence-building in the military field.”

Read Next
As some nations open, UK to quarantine arrivals for 2 weeks
EDITORS' PICK
Smart releases Hyun Bin’s second TVC
DOH to present new method of reporting COVID-19 cases next week
Almost 4,000 former communist rebels get financial aid from gov’t–DILG
Philippines logs 1,494 new COVID-19 patients; tally now at 41,830
EuroMillions Superdraw: A lottery draw unlike any other is coming to the Philippines
Water remains our saving grace right now
MOST READ
NAIA Terminal 3 to open for international flights starting July 8
Lacson calls report ‘malicious,’ but journalist says she tried to contact him
‘Keep our silence:’ Duterte tells troops not to avenge slain agents
As Ringo Starr turns 80, he talks about his life, Beatles journey, including that unfortunate Manila experience
Don't miss out on the latest news and information.