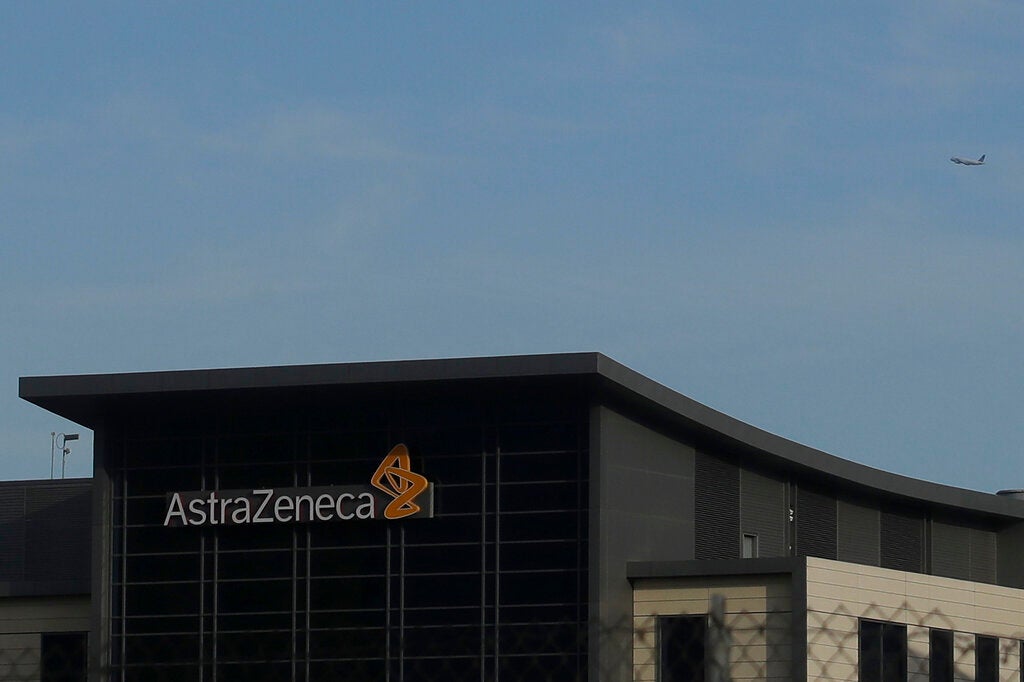 FILE – In this Thursday, Feb. 20, 2020 file photo, a view of the AstraZeneca logo, on a building, in South San Francisco, Calif. Drug maker AstraZeneca secured its first agreements Thursday, May 21, 2020 for 400 million doses of a COVID-19 vaccine, bolstered by an investment from the U.S. vaccine agency. (AP Photo/Jeff Chiu, File)

LONDON — British researchers testing an experimental vaccine against the new coronavirus are moving into advanced studies and aim to immunize more than 10,000 people to determine if the shot works.

Last month, scientists at Oxford University began immunizing more than 1,000 volunteers with their vaccine candidate in a preliminary trial designed to test the shot’s safety. On Friday, the scientists announced they now aim to vaccinate 10,260 people across Britain, including older people and children.

If all goes smoothly, the scientists predicted there might be enough positive data about the vaccine’s effectiveness to move forward with mass production relatively soon.

“If the vaccine is shown to work in the months ahead and it’s possible that if there’s enough transmission, that could happen in a relatively short period of time,” said Andrew Pollard, head of the Oxford Vaccine Group. “It’s possible as early as the autumn or towards the end of the year, you could have results that allowed use of the vaccine on a wider scale.”

But Pollard acknowledged there were still many challenges ahead, including how long it will take to prove the vaccine works, particularly since transmission has dropped significantly in Britain, in addition to any potential manufacturing complications.

He was unable to provide any initial data from the earlier trial, explaining that the trial was designed to be blinded, meaning the researchers don’t know which volunteers have received the experimental vaccine; those results are shared with a safety and monitoring oversight board. So far, there have not been any indications of worrying side effects.

When the vaccine was tested in monkeys, researchers found it protected them against pneumonia, suggesting that it could help to prevent severe disease in people, Pollard said. He said it was still an open question whether it could make a dent in how the disease is spread between people.

Earlier this week, drugmaker AstraZeneca said it had secured its first agreements for 400 million doses of the Oxford-developed vaccine, bolstered by a $1 billion investment from a U.S. government agency, for the development, production and delivery of the vaccine, starting in the fall.

Other experts welcomed the AstraZeneca investment, but noted there was still no proof the Oxford-developed vaccine would ultimately succeed.

Lawrence Young of the University of Warwick said the investment would hopefully help make the vaccine available globally, including in developing countries. But he said the vaccine’s efficacy in humans was still unclear, citing its failure to stop monkeys from becoming infected.

“This raises serious questions about the ability of this vaccine to protect against infection in humans and to prevent virus transmission,” he said in a statement. “We need to be urgently exploring other vaccine candidates.”

About a dozen different experimental vaccines are in early stages of human testing or poised to start, mostly in China, the U.S. and Europe, with dozens more in earlier stages of development.

Scientists have never created vaccines from scratch this fast and it’s far from clear that any of the candidates will ultimately prove safe and effective. Often, possible vaccines that look promising early fail after testing expands to thousands of people — one reason the crowded field is important. Many of the candidates work in different ways, and are made with different technologies, increasing the odds that at least one approach might succeed.

Most of the vaccines in the pipeline aim to train the immune system to recognize the spiky protein that studs the new coronavirus’ outer surface, so it’s primed to attack if the real infection comes along. The Oxford vaccine uses a harmless virus — a chimpanzee cold virus, engineered so it can’t spread — to carry the spike protein into the body. A Chinese company created a similar shot.

Other leading vaccine candidates, including one from the U.S. National Institutes of Health and Moderna Inc. and another by Inovio Pharmaceuticals, simply inject a piece of the coronavirus genetic code that instructs the body itself to produce spike protein that primes the immune system.

Meanwhile, companies and governments are beginning to scale up production now, aiming for hundreds of millions of doses of the candidates they think might win the vaccine race. It’s a huge gamble that could waste a lot of money if their choices fail and must be thrown away — but if they get lucky and a stockpiled vaccine pans out, it could help mass vaccinations start a few months faster.