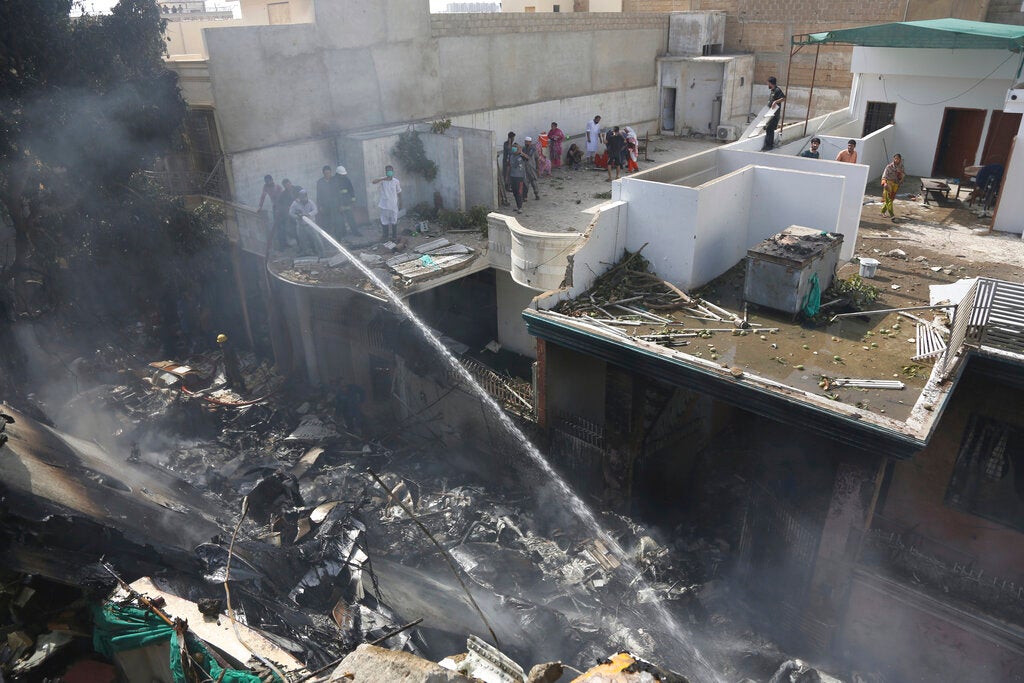 Fire brigade staff try to put out a fire caused by a plane crash in Karachi, Pakistan, Friday, May 22, 2020. An aviation official says a passenger plane belonging to state-run Pakistan International Airlines carrying more than 100 passengers and crew has crashed near the southern port city of Karachi. There were no immediate reports on the number of casualties. (AP Photo/Fareed Khan)

KARACHI, Pakistan  — A passenger plane belonging to state-run Pakistan International Airlines crashed near the southern port city of Karachi on Friday, killing all 107 passengers and crew, the city’s mayor said.

The aircraft crashed into a crowded neighborhood on the edge of the airport. Mayor Wasim Akhtar said at least five or six houses were destroyed in the crash. It wasn’t immediately known how many casualties were from among the residential area.

The civil aviation authority said the pilot called in a mayday saying that he had lost an engine. He was attempting to land when the plane crashed.

Witnesses said the Airbus A320 appeared to attempt to land two or three times before crashing in a residential area near Jinnah International Airport. The residential area on the edge of the airport known as Model Colony is a poor area and heavily congested.

A resident of the area, Abdul Rahman, said he saw the aircraft circle at least three times, appearing to try to land before it crashed into several houses.

Police and military cordoned off the area.

Local television reports showed smoke coming from the direction of the airport and video emerging of the aircraft flying low over a residential area seemed showed apparent flames shooting from one of the engines. Ambulances were on their way to the airport and there were reports of some injuries among residents on the ground.

Airbus did not immediately respond to a request for comment on the crash. The flight typically takes an hour and a half from the northeastern city of Lahore, the capital of Pakistan’s most populous province, Punjab, to Karachi.

Airworthiness documents showed the plane last received a government check on Nov. 1, 2019. PIA’s chief engineer signed a separate certificate April 28 saying all maintenance had been conducted on the plane and that “the aircraft is fully airworthy and meets all the safety” standards.

Ownership records for the Airbus A320 involved in the crash showed China Eastern Airlines flew the plane from 2004 until 2014. The plane then entered PIA’s fleet, leased from GE Capital Aviation Services.