Shelf Cha-Cha? Postpone ‘divisive’ issues for now if we can — Cayetano 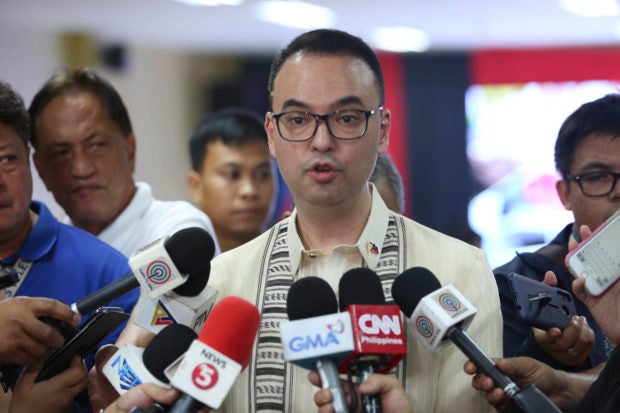 MANILA, Philippines — House Speaker Alan Peter Cayetano on Thursday said issues that would divide the lower chamber should be postponed for now.

Cayetano made the remark after Cagayan de Oro City 2nd District Rep. Rufus Rodriguez proposed for the deliberations on the issue of charter change (Cha-Cha) be suspended for now so that the lower chamber could focus on measures in response to the coronavirus pandemic.

“For me, anything that maghahati-hati tayo [would start divisiveness], if we can postpone that, let’s postpone it muna tutal the SONA is, what? May, June, July. Less than three months away and during the budget naman, mapag-uusapan lahat yan [it can be tackled, all of them],” Cayetano told reporters.

The House Speaker said that the issue on Charter change covers several other issues that needs to be debated on such as foreign ownership and term limits for politicians.

(If i tell you that’s priority, we can debate for a whole week, in the foreign ownership, in term limits, etc., which we should talk about it. How to make sure that local government will not go bankrupt, how they can help.)

Rodriguez, who chairs the House committee on constitutional amendments, said that he would recommend to Cayetano for Cha-Cha to be shelved “indefinitely.”

The lawmaker made the proposal after the Department of Interior and Local Government (DILG) reportedly directed its regional offices and supporters to continue gathering up to 2 million signatures in support of Cha-Cha despite the ongoing pandemic.

(If they see that as part of the advocacy, I respect that.)

Interior Secretary Eduardo Año has denied such reports and even labelled it as “fake news”.

However, the Philippine Daily Inquirer, which released the news, stood by its report.