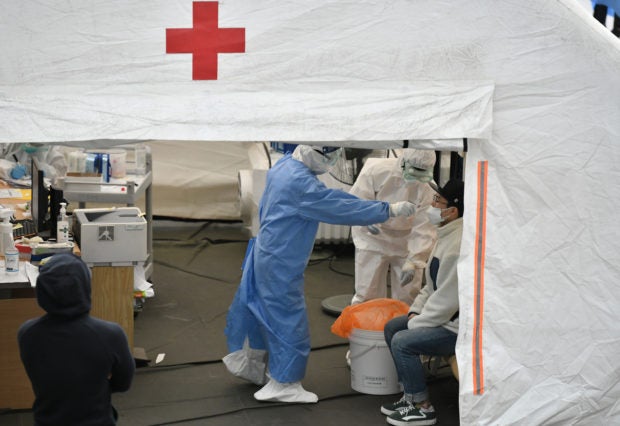 A medical staff member (C) wearing protective clothing takes test samples for the COVID-19 coronavirus from a visitor at a virus testing station in the nightlife district of Itaewon in Seoul on May 12, 2020. South Korean authorities were using mobile phone data on May 12 to trace Seoul nightclub visitors as they try to tackle a coronavirus cluster, they said, promising anonymity to those being tested due to the stigma surrounding homosexuality. Photo by Jung Yeon-je / AFP

SEOUL — South Korea’s tendency towards “ppalli ppalli” – doing things quickly and efficiently – has saved the day again in its so far victorious fight against the coronavirus.

When a cluster of infections linked to clubbers at Seoul’s nightlife hub Itaewon exploded right after strict social distancing rules were eased on May 6, the health authorities wasted no time in conducting massive testing and aggressive contact tracing – with help from the police, telco giants, and credit card companies, no less – to curb the outbreak.

And there’s no way you can miss this message in a hyper-connected country where Internet speeds are one of the highest in the world.

Mobile phone emergency alerts also ring constantly throughout the day, sent diligently by district offices to inform residents about new patients and their travel history, and to remind people to go for testing if they had been to Itaewon, especially to five gay clubs at the heart of the outbreak.

When an unexpected hurdle appeared with nearly a thousand clubbers uncontactable, possibly out of fear of exposing their sexual minority status, quick-thinking officials overcame it by offering anonymous testing. The decision raised testing rates eightfold.

But the daily tally has fallen to seven – from a high of 32 last Monday – bringing down with it fears of the cluster turning into a second wave of the virus.

Health officials have long warned that the virus can strike at any time, and South Korean efficiency in bringing down sporadic cluster infections is proving to be a good model for the rest of the world as the number of cases globally soars above 4.9 million.

The same “ppalli ppalli” (fast fast in Korean) approach is also expected to apply to a new and seemingly unrelated cluster found at Samsung Medical Centre, a major hospital in Seoul.

The Korea Centres for Disease Control and Prevention reported yesterday that four nurses working in the hospital had tested positive, again triggering fears of mass infections. The first case was a 29-year-old nurse who did not visit Itaewon or had any contact with previous patients.

Officials have already swooped in to identify the 277 people who came into contact with the first nurse and are in the process of getting them tested.

Ten minutes is all it takes to track a patient’s travel history using the newly-developed Covid-19 Smart Management System that taps into his or her credit card transactions and mobile phone location records. A manual epidemiological survey would have taken 24 hours to complete.

Testing is equally fast with the use of drive-through screening – a South Korean innovation now emulated in other parts of the world – and walk-through booths.

After all, South Korea learnt the importance of speed, transparency and preparedness the hard way when an outbreak of the Middle East Respiratory Syndrome in 2015 killed 38 out of 186 patients.

So when the coronavirus struck in February, the country quickly raised the alert to the highest red level and formed the Central Disaster and Safety Countermeasure Headquarters led by Prime Minister Chung Sye-kyun to boost government-wide response to the outbreak.

Decision-making has also been decentralized to allow city governments and district offices to disseminate crucial information to residents and rally support for responsible social distancing behavior.

It all adds up to an impressively coordinated approach to fighting the virus that is winning praise from all over the world.

South Korea is now conducting clinical tests for seven existing drugs to find a possible cure for the coronavirus, and President Moon Jae-in has proposed closer collaboration with other countries to develop treatments and vaccines.

“A novel infectious disease could emerge at any time, and we must be able to respond more quickly and effectively,” he said during a recent World Health Assembly speech.

“Ppalli ppalli” is the mantra again, and when combined with the right amount of government leadership, industry expertise and citizen cooperation, it can help South Korea sail through troubled waters.