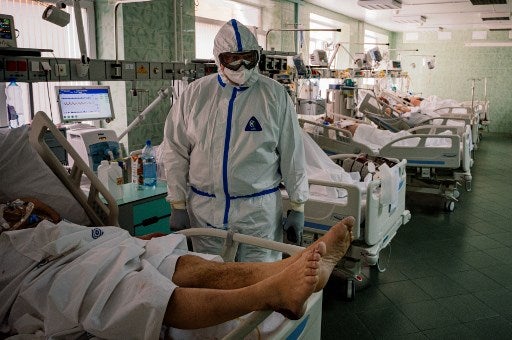 An exhausted coronavirus patient slowly and deliberately writes his message on a green clipboard one letter at a time: “Doctor, when can I go home?”

For the past three weeks, the 54-year-old has been on a ventilator in a hospital in Moscow, the epicenter of the pandemic in Russia, receiving treatment for the virus.

“Wait a while longer,” says Dmitry Cheboksarov, head of the coronavirus ward at the Vinogradov hospital.

“We are teaching you how to breathe,” he says softly. “It will be another four days.”

Pressure on the hospital in Moscow has eased since Russia reported its record number of new coronavirus infections earlier this month.

But doctors and nurses in the coronavirus unit are working long hours and treating a steady flow of patients that has kept their ward at capacity. They say they have yet to see the light at the end of the tunnel.

Cheboksarov, wearing a mask, goggles and a full protective suit, explains that his patient’s health is improving. But he still needs to be hooked up to respirator, which prevents him from speaking.

“Don’t be sad,” the doctor says. “Your loved ones are kissing you. I’m in touch with them. They’ll phone you tomorrow.”

‘Try not to think’

The 36 beds in this coronavirus ward have been occupied continuously since mid-April, says Cheboksarov, a father of two who estimates he had slept an average of four hours every night for the past month.

“I try not to think about the end of the epidemic. It would get in the way of my work.”

With more than 290,000 cases, Russia has the second-highest number of infections in the world, behind only the United States.

Yet its death rate is low compared to other countries hit hard by the virus: by Monday, health officials had reported a total of 2,722 fatalities.

Critics have cast doubt on the low official mortality rate, accusing authorities of under-reporting deaths in order to play down the scale of the crisis.

Russian health officials say one of the reasons the count is lower is that only deaths directly caused by the virus are being included.

They also say that since the virus came later to Russia, the country had more time to prepare hospital beds and launch wide-scale testing to slow its spread.

During AFP’s visit Sunday, supervised by Moscow health officials, three black body bags could be seen being moved from the ward’s “red zone” where the virus patients are treated.

The number of medics in this coronavirus unit has grown dramatically in recent weeks, from 20 to more than 90, Cheboksarov said. Medical workers from across the country have joined his team.

Olga Chursinova an anesthetist from Ivanovo northeast of Moscow has been working at the Vinogradov hospital for a month.

“It’s hard,” she told AFP. “I have never seen anything like this.”

“The number of patients isn’t dropping, new patients keep arriving,” the 57-year-old with dark circles under her eyes explained.

But the hospital in Moscow “has more modern equipment and more medicine” compared to the facility where she works in Ivanovo, she added.

Medical workers throughout the country have raised concerns about equipment, including a lack of protective gear for staff, and new ventilators that have been blamed for deadly fires at hospitals in Saint Petersburg and Moscow.

Elena Alkalaeva, 49, from Irkutsk in Siberia, said she responded to a televised appeal for doctors to come to the capital out of a sense of “patriotism”.

Her temporary contract working in Moscow comes with a salary five times higher than her job back home, she added, without specifying the amount.

“I haven’t started to tell myself that things are calming down,” she said during a break in her shift.

“You can have a quiet day here and then a terrible night. This is how it works in the respiratory ward.”

Cheboksarov, the head of the ward, likened his team of medics to an “orchestra,” which is getting more and more attuned to fighting the virus.

“We didn’t have very much time to rehearse. But the show has started and we will be here for as long as it takes.”