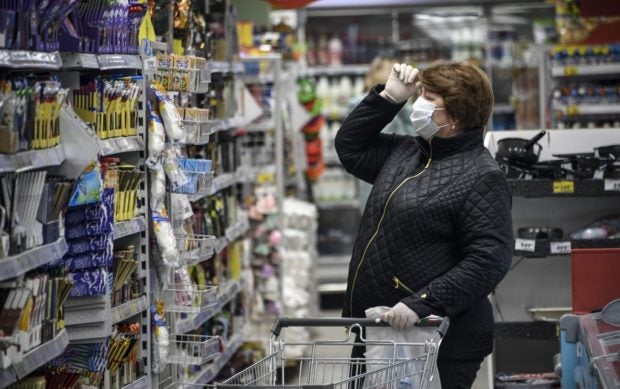 A woman wearing protective mask shops in a supermarket in Moscow on May 13, 2020, amid the spread of the COVID-19 coronavirus. Photo by Alexander NEMENOV / AFP

LONDON — Russia has almost 250,000 coronavirus confirmed infection cases, the second-highest tally in the world after the United States.

But its total mortality figure of just over 2,300 remains very low compared with other major European nations and a mere fraction of America’s death toll. But Russia’s rates of infection are ominous, with an average of 10,000 new cases registered every day.

The pandemic could not have come at a worse time, just as Russia is reeling from the combined effects of low oil prices and the global economic downturn.

The Russian government was slow to respond to the health crisis; until early March, the authorities in Moscow still appeared confident that their country wouldn’t be severely affected.

They also had a political interest in downplaying the health challenge. A nationwide referendum on constitutional amendments designed to allow President Vladimir Putin to remain in office for many years to come was scheduled for April 22.

Furthermore, Mr Putin was also looking forward to welcoming world leaders such as China’s Mr Xi Jinping and French President Emmanuel Macron to a lavish military parade planned for Moscow on May 9 to mark the 75th anniversary of the end of World War II in Europe.

Ultimately, both events had to be postponed, and despite Mr Putin’s evident reluctance, mounting coronavirus infection rates eventually forced the Russian leader to order a complete shutdown of economic activity.

Earlier this week Mr Putin announced the end of what he gingerly called the period of “non-working days”, and ordinary Russians are beginning to emerge from their homes and return to work.

But Moscow, the epicentre of the pandemic and the city which accounts for more than half of all Russian coronavirus cases, will remain under lockdown until the end of the month.

And the damage the pandemic has inflicted on Russia is certain to be longer-lasting.

Predictably, its medical services – underfunded and forced to cope with an aging and impoverished population – has received a fair amount of criticism.

Russia has performed relatively well in the number of coronavirus tests it conducts in the population at large; by that single indicator is doing better than many wealthier European nations.

But its hospital facilities are proving inadequate, as well as suffering from poor safety records: on Tuesday, Russian firemen battled to put out a fire in an intensive care unit in St Petersburg, the country’s second-biggest city, in which five coronavirus patients died.

Furthermore, in a country with a long tradition of “doctoring” statistics, few ordinary Russians believe Mr Putin’s reassurances that the pandemic is “under control”.

Although population statistics for the past month will not be available until June, preliminary figures point to a 50 to 70 per cent increase in the number of deaths recorded in Russia’s capital city, in comparison to averages over the past five years.

It is reasonable to assume that at least some of these may be due to unrecorded cases of coronavirus-related complications.

And the economic ravages will be even more severe as the pandemic coincides with a serious downturn in the country’s finances due to the collapse in the price of oil, which accounts for around 40 per cent of Russia’s budget revenues.

The International Monetary Fund expects Russia’s gross domestic product to shrink by 5.5 per cent this year, and this could well prove to be an optimistic assessment. Meanwhile unemployment could peak at eight million, admits Mr Alexei Kudrin, Russia’s chief auditor. That would be a fourfold increase on current levels.

Mr Putin claims to be “working every day to take measures to minimize the negative impact” of the pandemic. State-controlled media shows him conducting frequent video conferences with government officials throughout the country.

Still, Mr Putin’s popularity ratings are dropping to their lowest level since the president came to power two decades ago. In one survey, only a quarter of the respondents claimed to have faith in his ability to solve the crisis.

With adequate hard currency reserves, Russia has the powers to get through the pandemic. Mr Kudrin is on record as urging Mr Putin to spend up to half of the reserves on alleviating economic troubles.

Still, Mr Putin is in the unenviable position of having to grapple with challenges over which he has no control.

And ones which often defy comprehensive solutions.