Nieves said he would already consider it a “good month’’ if he could sell at least 20 bikes within such a period, since not that many Filipinos are into biking because of the country’s tropical climate and unsuitable road conditions.

But when the coronavirus pandemic forced Luzon into lockdown in mid-March, Nieves’ sales suddenly shot up —with about 100 units leaving his shop by mid-April.

Some of the buyers were medical front-liners unable to get to work due to the ban on public transport, while most were workers who have no vehicles of their own.

Nieves was not alone. Other bike sellers and distributors interviewed by the Inquirer reported a surge in sales—and shared the hope that it was not a mere, short-lived trend but a hint of a larger, permanent shift in favor of sustainable transport.

“It’s very important to take advantage of this moment and implement better ways to cater to cyclists,” said Rommel Gallardo, sales manager of Celeste Cycles. “Right now the demand is based on necessity. But moving forward, it has major benefits in improving traffic in Metro Manila and reducing emissions from cars.”

Celeste Cycles is part of Mega Ideal Enterprises, a 33-year-old cycling distribution firm with over 500 dealers nationwide. Its retail sales are usually driven by high-end bikes for professional cyclists and priced anywhere between P30,000 and P500,000.

Since some of the company’s imports are from China and Italy—two of the countries hit hardest by the coronavirus—most of its shipments got stalled even before the start of the Luzon lockdown.

But sales of low- to mid-level bikes soared dramatically, Gallardo said. The shop used to move 200 to 300 units of such models during peak season like Christmas, but in April alone Celeste Cycles sold 500 to 600 units priced between P5,000 to P10,000 each. 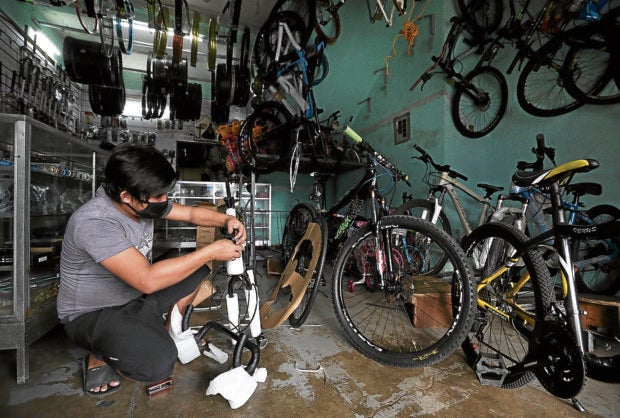 READY FOR A SPIN A man assembles a brand new bike inside a shop in Marikina City. The ban on public transport has seen a surge in the sales of bikes, with cycling seen becoming part of the new, postpandemic normal. —LYN RILLON

“Our stocks are almost out,” Gallardo said. “Most of the shops [in our distribution network] are saying the same thing.” What he found interesting, he said, is that customers are no longer choosy about the bikes they’re buying.

Normally, mountain bikes prove to be bestsellers during the dry season, he said. Now, even stocks of city bikes and foldable bikes are almost out.

“I think what triggered this bump in sales was the lockdown. Now … [the] demand is really extraordinary,” Gallardo said.

Smaller distributors, like the family-owned Good Health Sports Center in Quezon City, are riding on the same trend. The 35-year-old company moved its business online in March “as a trial.’’

“We just wanted to see if there are people looking for bikes,” said Desiree Lim, 26. “Because bike shops are considered nonessential, we weren’t allowed to operate. We had zero sales in March. So I told my parents we can try shifting to online [sales].”

“We used to have a set number of customers—dealers and shops—who would always be looking for bikes. Now different people want to buy [bikes],” she added.

But being dependent on imports, Good Health Sports Center has to struggle with its inventories. “Everything is on hold,” Lim said. “We still don’t know when new shipments will arrive … and we can’t deliver outside Luzon yet.”

Despite the challenges, Lim, Gallardo and Nieves are confident that the rising demand was not a one-off thing.

But alas, promoting cycling as a means of urban transport remains an “afterthought” in government urban planning, according to Keisha Mayuga, a licensed environmental planner who studies transport and urban planning.

Hopefully, the changes being forced upon society by the pandemic would finally push transport officials into making that “good first step” toward making biking—and walking—part of the “new normal,” she said.

Setting up bike lanes have always been included in the mass transport plan of every administration, but getting a critical mass to support this green initiative has always been a challenge.

For transport officials, the pandemic provides an opportunity to take the idea farther.

Transport officials are currently working on an administrative order promoting cycling “during and after the COVID-19 pandemic,” said Assistant Secretary Goddes Libiran.

Ultimately, the Department of Transportation wants local government “to develop more facilities to make biking safer and to craft ordinances to encourage biking—like requiring bike racks and lockers, among others.”

“There’s still some push and pull between transport groups and the government. But hopefully we’d realize that this is the best thing to do, logistically,’’ Mayuga said. “If this doesn’t play out right in the next month, we’re bound [to go back] to the old ways.”