BORONGAN, Eastern Samar, Philippines — The mayor of the small town of Jipapad in Eastern Samar province that was severely devastated by Typhoon “Ambo” (international name: Vongfong) raised frantic appeals for help on Saturday, saying his constituents had no more food and clean water.

Jipapad, a fifth class municipality with an annual income of not more than P25 million, was the worst hit among the eight towns affected by Ambo when it barreled through the province on May 14.

“I am desperately calling for aid not only from the national and provincial government but from all good Samaritans because we don’t have food and water,” Mayor Benjamin Ver said in an interview with church-run radio dyVW in Borongan, the provincial capital nearly 80 kilometers to the south.

“President Duterte, I know that we are in dire situation due to COVID-19 but our situation here right now is worse. We don’t have any electric supply, no communication. Our people are hungry,” Ver said.

Floodwaters rose as high as a two-story house and most of the town’s 13 villages remained underwater on Saturday morning, he said.

Ambo made landfall about 30 km east of Jipapad on Thursday with winds of up to 185 km per hour.

Two people in San Policarpio town and two others in nearby Oras, both in Eastern Samar, died at the height of the typhoon.

If it does not change direction, it is expected to be 730 km northeast of Basco, Batanes province, by Monday afternoon heading toward southern Japan. 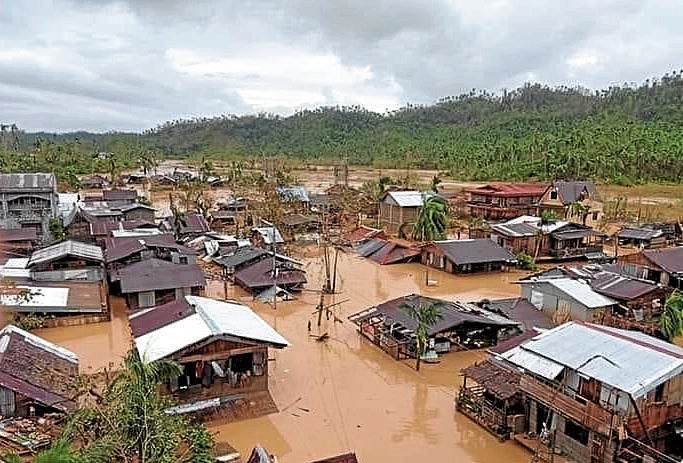 HELP US! The remote town of Jipapad in Eastern Samar, still submerged in muddy floodwaters on Saturday, appeals for help two days after it was struck by Typhoon “Ambo” (international name: Vongfong). Mayor Benjamin Ver says 400 sacks of rice were destroyed and fears a diarrhea outbreak because of lack of clean water. —CONTRIBUTED PHOTO

Officials said Jipapad remained isolated on Saturday as the road and the bridge connecting it to the main highway were washed away by rampaging waters.

Gov. Ben Evardone said floodwaters and fallen trees prevented a team from the Department of Public Works and Highways, provincial government and Army from reaching the town.

“I’m worried about the people there, especially the elderly and children,” he told the Inquirer.

Ver said almost everyone in his town of 7,800 were displaced by Ambo.

“We are calling our national government, our provincial government, even the private sector to help us. This is the worst tragedy in the history of Jipapad. The floodwaters reached so high that there were families inside their homes that were trapped,” he said.

Ver said 400 50-kilogram bags of rice and boxes of medicines that were to be distributed to households during the COVID-19 quarantine were destroyed by floodwaters.

He feared a diarrhea outbreak due to the absence of clean water. 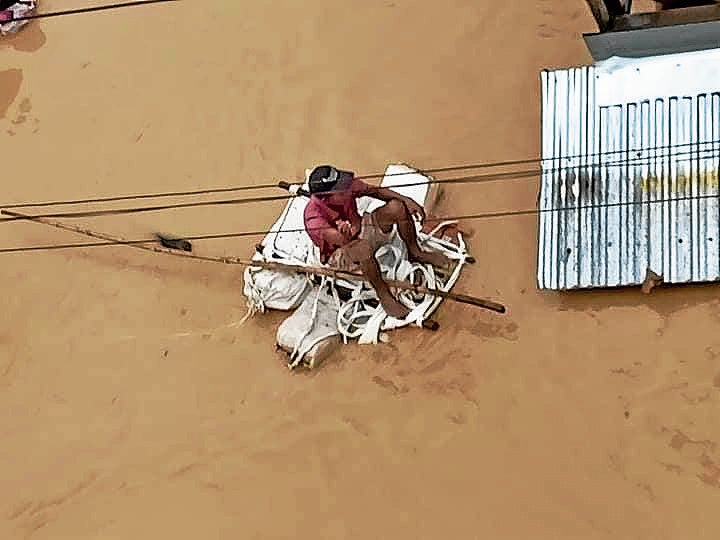 NAVIGATING A man on a makeshift raft navigates a flooded street in Jipapad town, Eastern Samar province, by pulling on an electric wire, indicating the height of the muddy water two days after Typhoon “Ambo” devastated his town. —CONTRIBUTED PHOTO

Evardone said the provincial government could not provide much help to the town since its savings and calamity funds had been used up in responding to the COVID-19 outbreak.

“We are appealing to the national government to assist us financially for our long-term needs. But the immediate needs now are rice, food packs, water and housing materials for the hundreds of displaced families and thousands more from the evacuation centers,” he said.

Evardone said a number of flood-damaged classrooms and barangay halls that were used as isolation rooms for persons being monitored for COVID-19 also needed repairs.

The towns affected by Ambo were San Policarpo, Dolores, Maslog, Oras, Arteche, and Can-avid, according to the Provincial Risk Reduction and Management Office (PRRMO).

Josefina Titong, the PRRMO head, said that in addition to four people who died, 14 others were hurt during Ambo’s onslaught.

She said Ambo displaced more than 127,900 individuals in the province.

In nearby Northern Samar, Ambo displaced nearly 15,900 people in 16 of its 24 towns, according to police reports.

Evardone had described Ambo as “Yolanda Jr.” because of the widespread damage it had caused in his province.

Supertyphoon “Yolanda” (international name: Haiyan) was the strongest to ever make landfall and also swept through parts of Samar Island in November 2013. It left more than 7,000 people dead and P130 billion in damages.

Ambo destroyed at least P80 million worth of crops in the Bicol region, according to the regional office of the Department of Agriculture.

Farther north, hundreds living in landslide-prone villages of Itogon, Benguet province, were also evacuated. Landslides caused by a typhoon in September 2018 killed more than 100 people in the town.

One good outcome from the storm was the elevation of the Angat Dam’s water level from 187.72 meters above sea level on Friday to 190.19 masl early on Saturday.

Despite the increase, the reservoir’s stock remains below the normal high level of 210 masl. Angat Dam is Metro Manila’s main source of water.