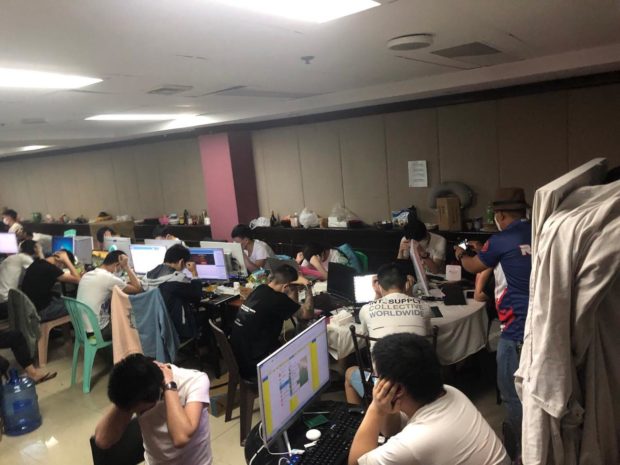 Another illegal Pogo firm uncovered, this time in Las Piñas City, which led to the arrest of 265 Chinese nationals.  Photo from NCRPO PIO

NCRPO Public Information Office said prior to the raid, the police launched a week of surveillance and intelligence gathering against the establishment after receiving reports from confidential informants.

After further investigation, the Business Permit and Licensing Office said the Pogo company was not registered.

The suspects are now detained at the NCRPO Headquarters in Camp Bagong Diwa, Bicutan, Taguig City while complaints for violations of Bayanihan to Heal as One Act and Executive Order 112 are to be filed against them.

The immigration status of the suspects are yet to be determined while investigation is ongoing.

Metro Manila police chief Major Gen. Debold Sinas said in a statement that the police will continue its anti-criminality operations despite the coronavirus disease crisis.

The government allowed Pogos to partially operate during the quarantine period, provided that they will follow strict protocols. Pogos must also seek accreditation from the Philippine Amusement and Gaming Corporation.