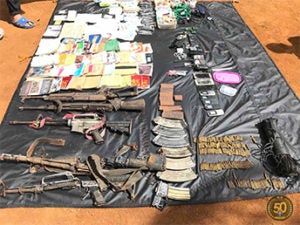 Firearms and documents recovered by the army in the series of clashes that lasted from May 10 to May 13. —Eastern Mindanao Command

DIGOS CITY—People were made to line up at funeral homes to identify the bodies of at least 10 suspected New People’s Army (NPA) guerrillas that the military said were slain in clashes that lasted for three days at the boundaries of Northern Mindanao and Caraga regions.

Lt. Col. Ezra Balagtey, head of the Eastern Mindanao Command (Eastmincom) information office, said on Thursday (May 14) that four of those killed were ranking leaders of NPA’s Guerrilla Front 4A operating in the two regions.

The four were identified by a former rebel during what Balagtey said was “a public display and identification in Gingoog City”, where the bodies of the slain rebel susepcts were brought last May 13.

He said the clashes started after Eastmincom’s Joint Task Force Diamond responded to reports about the sighting of a number of NPA guerrillas in the far flung village of Kamanikan in Gingoog.

Clashes, according to the military, lasted until May 13 when soldiers recovered assault rifles, explosives, communications gadgets, devices and documents that included a primer with the title Agrarian Revolution (AgRev).

On May 12, the military turned over the 10 bodies to Gingoog officials who put these in funeral homes for people to identify the following day.

Balagtey also said soldiers got reports that another five guerrillas were killed during the clashes but their bodies buried in the forests by other guerrillas. This has yet to be verified, though.

Another clash involving the Army’s 71st Infantry Battalion (IB) in Davao de Oro’s Mabini town also led to the recovery of assault rifles at the village of Pagibirian.

In Surigao del Sur, the military said another NPA fighter was killed and an AK47 rifle recovered in a clash between the rebel group and the 36th IB in the village of Cabangahan, Cantilan town on May 11.