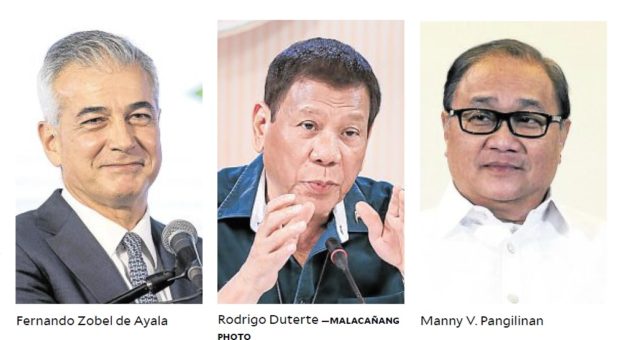 MANILA, Philippines — The coronavirus crisis has turned into a golden opportunity for much-pilloried business tycoons to mend fences with President Rodrigo Duterte.

Earlier bludgeoned on the stock market by Duterte’s tirades against their allegedly “onerous” water concession deals with the government, conglomerates Ayala Corp. and Metro Pacific Investments Corp. regained P62.7 billion in combined value on Tuesday, a day after the President apologized to the Zobel brothers and Manuel V. Pangilinan for past “hurtful” words.

The Zobel brothers and Pangilinan accepted the olive branch extended by Mr. Duterte.

Both groups also vowed to continue working with the government to help the country recover from the challenges arising from the COVID-19 pandemic, which now puts the economy at risk of a recession for the first time since 1998.

In a televised address on Monday night, six months after he first railed against the Zobels and Pangilinan, the President said he sincerely appreciated the help of the business leaders in responding to the COVID-19 crisis through donations and looking out for their employees.

He offered a chance to talk and to be reasonable with Manila Water Co. Inc. of the Zobels and Maynilad Water Services Inc. of Metro Pacific.

Manila Water and Maynilad distribute water in the east and west zones of Metro Manila, respectively, under agreements signed with the regulator Metropolitan Waterworks and Sewerage System in 1997 following what was then called the world’s largest water privatization.

“I can promise you that I will be nice, and if you want to see we can talk. I’ve run out of my arrogance because of COVID-19,” Duterte said. “The COVID-19 humbled me. With the kind of response that you gave to the public, it’s a humbling experience for me that, you know, you might need them someday.”

The apology came months after the President threatened to jail the Zobels and Pangilinan over allegedly onerous water deals.

Duterte had been railing against the water companies since late 2019, a year when Metro Manila suffered two periods of water shortage. This prompted a review of the 1997 water concession deal which the government claimed was riddled with onerous provisions, like barring it from intervening in the setting of rates.

Because of these provisions, the government was ordered by a Singapore arbitration court to pay the water concessionaires close to P11 billion as compensation for “losses or damages.”

After Duterte’s criticism, Manila Water, Metro Pacific and Ayala Corp. had collectively lost as much as P108 billion in market value.

“We appreciate the recognition of the Ayala Group’s efforts in supporting the administration as it faces the challenges brought by the COVID-19 pandemic,” the brothers said in a statement.

The COVID-19 response package of the Ayala Group has amounted to P5.7 billion in the form of employee support, business operations and rental waivers, as well as monetary and in-kind donations to medical front-liners and the poor.

“We are committed to help the President tackle the many challenges he has to deal with and are confident that by working together, our country can overcome each challenge, save lives and gradually put the country back on a path of growth,” the Zobels said.

Pangilinan also thanked Mr. Duterte for his “sincerity and kindness.”

“I wish to assure him that our group is fully committed to being a partner of government in addressing the heartbreaking moments of COVID-19 on our people, in building a better tomorrow for them,” he tweeted on Monday night.

Pangilinan’s group has mobilized over P190 million worth of resources to help the country’s medical front-liners and support vulnerable communities amid the pandemic. This is on top of a nationwide internal program to ensure the well-being and protection of its employees.

Both the Ayala and Metro Pacific groups are likewise involved in the health-care sector, thus helping in the country’s front-line defense against the COVID-19 pandemic.

Asked on Tuesday if he, as the country’s chief economic manager, had a hand in the President’s apology, Finance Secretary Carlos Dominguez III replied: “I deal mostly with economic and financial but not penitential issues.”

Jose Vistan, head of research at AB Capital Securities, said Mr. Duterte’s friendly gesture was taken as “catalyst of a reversal of sentiment” for Ayala and Metro Pacific.

“This will improve the foreign investors’ perception of our economy that was hounded last year by regulatory issues resulting in massive selloffs last year in the Philippine equities,” said Manny Cruz, chief strategist at Papa Securities.

In February, Ayala signed a deal to assign majority voting rights in Manila Water to the group of tycoon Enrique Razon Jr., who was infusing P10.7 billion in fresh equity and came in as a crucial ally at a time when the water concessionaire was grappling with hostile regulators.